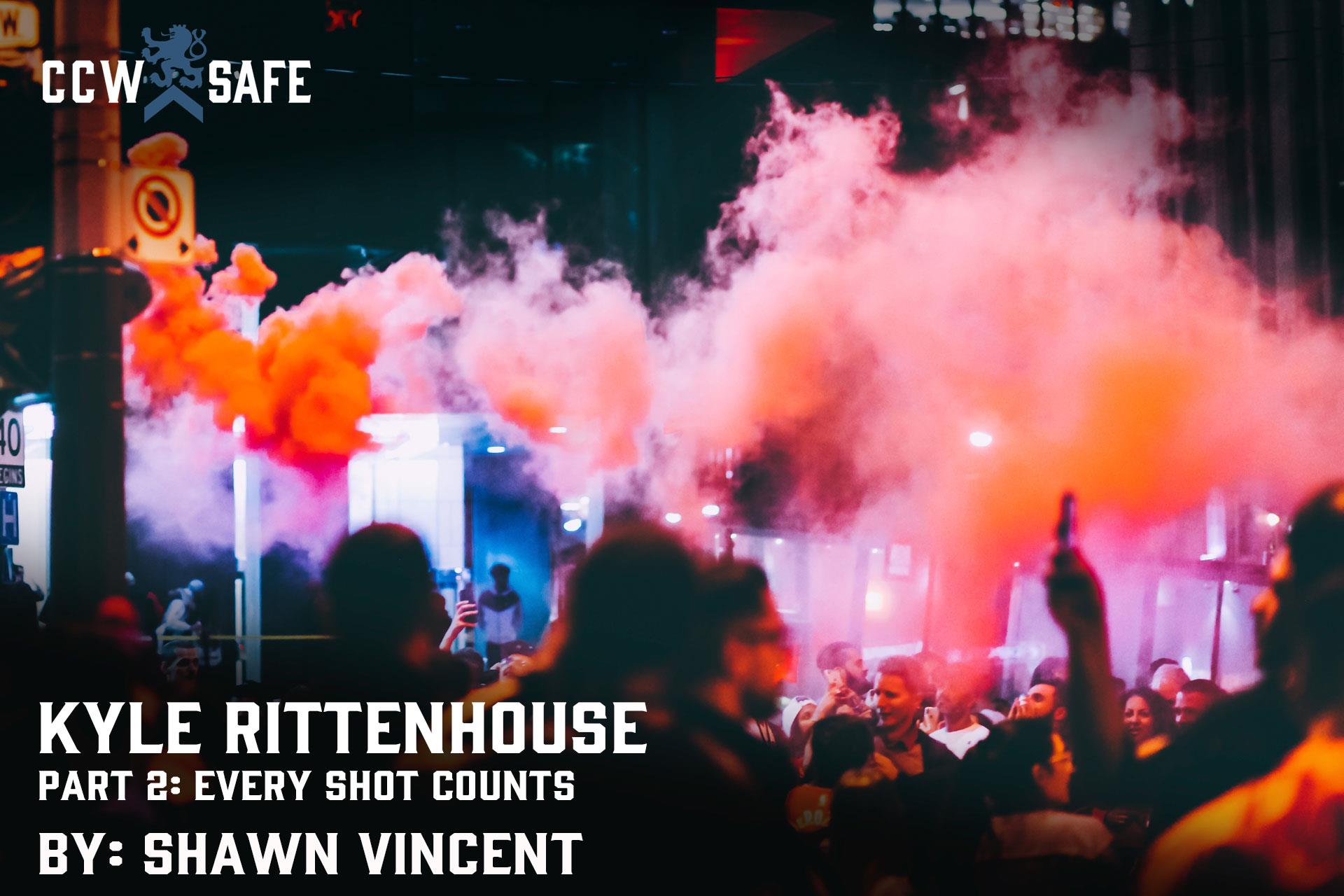 Posted on March 19, 2021 by Shawn Vincent in In Self Defense

Kyle Rittenhouse fired his AR-15-style rifle in four distinct incidents during a protest-turned-riot in Kenosha, Wisconsin on the night of August 25. In three of the incidents, someone was shot. In two of the incidents, someone died. The district attorney has filed criminal charges for each of the incidents, charges that range from “recklessly endangering safety” to “first degree intentional homicide.” Any one of the charges carries a long potential prison sentence: 12 years, 60 years. Life. To stay out of jail, Rittenhouse will have to make a self-defense claim for practically every bullet he fired. It’s a concept we refer to as “every shot counts.” Don West, criminal defense attorney and National Trial Counsel for CCW Safe, once repeated the joke that “every bullet comes with a lawyer.” That might be true considering the legal team assembled to defend Rittenhouse in the high-profile case.

The first incident began when 36-year-old Joseph Rosenbaum targeted Rittenhouse, perhaps mistaking him for another armed counter-protester he had clashed with in the minutes before the shooting. Rosenbaum was captured on video chasing after Rittenhouse. He threw something at him and missed; he cornered Rittenhouse between an agitated crowd and some parked cars. According to witness Richard McGinnis, Rosenbaum tried to take Rittenhouse’s rifle. The criminal complaint reads: “McGinnis said that he definitely made a motion that he was trying to grab the barrel of the gun. McGinnis stated that the defendant pulled it away and then raised it. McGinnis stated that right as they came together, the defendant fired.” McGinnis counted three rounds fired in rapid succession. A video recording referenced in the criminal complaint captured four “loud bangs.” Rosenbaum died from his injuries. It’s the first count in the criminal complaint: first degree reckless homicide.

In regard to the first-degree reckless homicide charge, because the shots occurred in rapid succession, they’ll likely be dealt with legally as a single incident, meaning Rittenhouse didn’t have much time to stop and reflect between each individual shot. Don West says that, despite the fact Rosenbaum was unarmed, “once he attacks Rittenhouse, once he throws stuff at him, once he chases him, and then once he reaches for the gun, my thought is that Rittenhouse, regardless of all the circumstances under which he finds himself at that moment, he would have a reasonable belief that a deadly force threat was imminent.”

But there is another charge that stems from those first four shots. In count two, the state attorney also claims those shots recklessly endangered the safety of the witness Richard McGinnis. Don West suggests that a successful self-defense claim SHOULD protect Rittenhouse from both charges, but depending on the evidence and testimony presented at trial, there is a chance Rittenhouse could be acquitted on one charge but found guilty of the other.

In the immediate aftermath of the shooting, according to a video released by Rittenhouse’s attorneys, the “mob” began issuing verbal threats, and Rittenhouse fled.

The criminal complaint describes a video of Rittenhouse running down a street filled with people. “Beat him up!” someone yells. “Get his ass!” someone shouts. An unknown person strikes Rittenhouse in the head, knocking his hat off, and shortly after, Rittenhouse stumbles and falls to the ground. Then the second shooting incident begins.

According to the criminal complaint, “As the defendant is on the ground, an unidentified male wearing a dark-colored top and light-colored pants jumps at and over the defendant.”  A video released by Rittenhouse’s attorneys claims the protester tried to jump “ON” Rittenhouse. As Rittenhouse rolls backwards, he fires two shots that strike no one. This is the fifth count in the criminal complaint: first-degree recklessly endangering safety for showing “utter disregard for human life.”

A moment later, protester Anthony Huber strikes Rittenhouse in the back of the head with the edge of a skateboard. Then, while Rittenhouse is prone on the ground, Huber tries to rip the rifle from his hands. Rittenhouse fires a single round — the third shooting incident. Huber stumbles away and collapses on the road where he dies of his wound. That’s count three: first-degree intentional homicide.

Don West says, “perhaps more so than in the Rosenbaum shooting. Rittenhouse would have every reason to believe that all of these guys were in it as part of a joint attack. They were just taking their own turns, and he was essentially fighting all of them.”

Finally, in the fourth and final shooting incident, protester Gaige Grosskreutz, who at first appears to put his hands up in surrender, quickly changes posture and lunges forward with a pistol aimed at Rittenhouse. Rittenhouse fires a final shot, striking the assailant in the bicep. According to the criminal complaint, “Grosskreutz then runs southbound away from the defendant screaming for a medic.” It’s count four: attempted first-degree intentional homicide.

“The fact that Rittenhouse only shot Grosskreutz once is important,” Don West says. “He neutralized the threat, and then stopped shooting.” Don points out that once Grosskreutz retreated, Rittenhouse turned his rifle towards another protester who immediately put his hands in the air and disengaged. “The fact that Rittenhouse didn’t fire on him demonstrated real restraint, and it will help his lawyers make the argument that during the other occasions when he did fire, he acted reasonably.”

The criminal complaint notes that the rifle’s magazine was designed to hold 30 rounds. Rittenhouse appears to have fired only eight rounds during these four encounters, and in each encounter, it seems he fired only as many rounds as were required to stop the threat. In the final moments, after the shooting of Grosskrutz, as Rittenhouse retreated to safety, a series of gunshots went off behind him. Remarkably, Rittenhouse didn’t re-engage; he walked briskly away to where law enforcement had established a presence.

Incident by incident, it seems Rittenhouse has a solid self-defense claim, but his attorneys are going to have to overcome the fact that Rittenhouse voluntarily left a place of safety and intentionally took a rifle into a volatile situation, violating an emergency curfew and perhaps violating Wisconsin’s gun laws. Moreover, Rittenhouse will have to overcome the fact that one of his assailants was unarmed and another was armed only with a skateboard. It’s a tall order, and he’ll need every advantage he can get. It helps that, at all times, Rittenhouse attempted to retreat from his assailants and only fired when trapped in a corner or prone on the ground. And every round left in the standard-capacity magazine —  every shot he could have fired but chose not to — is an argument that Rittenhouse used extraordinary restraint.

The lesson for concealed carriers is that in a self-defense scenario, every shot counts. Every bullet you fire increases your legal risk, and each round that remains in your magazine is an argument for the reasonableness of your actions. Make every effort to avoid a dangerous confrontation, and when left with no other choice, fire only until you’ve neutralized the threat.