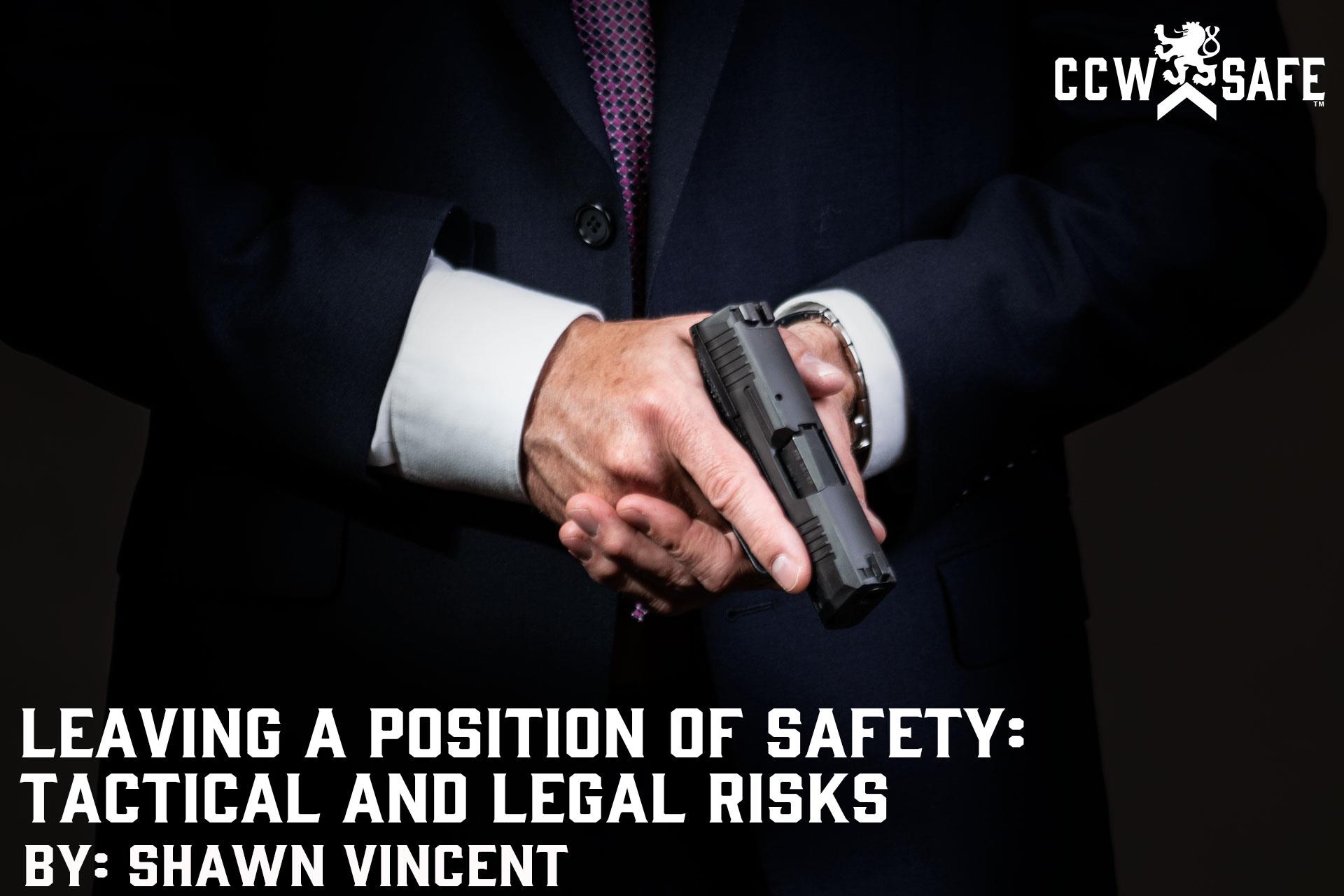 Posted on September 3, 2021 by Shawn Vincent in In Self Defense

Leaving a Position of Safety

Leaving a Position of Safety

In many of the self-defense cases that we have studied, we have seen armed defenders leave a place of safety to engage a potential threat. Ted Wafer left the safety of his living room to encounter a stranger on his front porch. Amber Guyger left the relative safety of a public hallway to confront what she thought was an intruder in her apartment. Gyrell Lee chose to arm himself before walking down the street to a confrontation between his cousin and a “known trouble-maker.”

All three of these armed encounters ended with one party being fatally shot and the other party being sent to jail for murder. In each case, the fact that the defender left a place of relative safety to engage the perceived threat weighed against them at trial.

Don West, criminal defense attorney and National Trial Counsel for CCW Safe says, “When a prosecutor is evaluating a case, they look at more than just those moments around when the trigger was pulled. They’re looking at a broader, more expansive view of how these people came to be together — what circumstances led up to this lethal encounter.”

CCW Safe Critical Response Coordinator Gary Eastridge spent decades of his career investigating homicides. Gary says, “As an investigator, you take a deep look into why this person was at that location at that time.” In cases where the defender leaves a place of relative safety to engage a perceived threat, the prosecutor may “try to spin it to appear that you went there looking for a fight, that you knew there was the potential for trouble, and that’s why you armed yourself.”

Don West agrees. “The notion of inserting yourself into a circumstance that’s likely to be volatile, likely to result in some kind of violence when you don’t need to — it paints a negative picture of you, and it’s one more obstacle you and your lawyer will have to overcome when trying to show you acted reasonably while facing an imminent threat of great bodily harm or death.”

The prosecutors in the Ted Wafer case accused the defender of being cavalier with his weapon, treating his Mossberg tactical shotgun like a toy.  When Wafer opened his front door in response to a stranger’s frantic pounding at a very early hour of a cold night, he was startled by the shadowy figure he found on his porch, and he squeezed off a round, fatally shooting a lost, drunk, and injured teenaged girl. At trial, prosecutors argued it wasn’t reasonable for Wafer to have literally opened the door to the deadly encounter, and a jury agreed, convicting him of second-degree murder.

While Wafer left the safety of his home to confront a perceived threat outside, off-duty Dallas police officer Amber Guyger left a relatively safe hallway to confront an intruder inside. The problem was, exhausted after a double shift, Guyger mistakenly parked on the wrong level of her building’s parking garage, and when she barged into the unlocked apartment of her downstairs neighbor, she didn’t realize her mistake until after she shot the unarmed occupant, a young man named Botham Jean. At trial, prosecutors argued that Guyger’s police training would have prompted her to call for backup before entering a dwelling with a potentially dangerous suspect — even if that dwelling was her own. “You could have called for help on your radio,” the prosecutor said, “and you could have had the cavalry there in two minutes. … You could have had SWAT mobilized. … You could have had K9 mobilized. … And had you done any one of these things, Mr. Jean would probably be alive today.” A jury convicted Guyger of murder.

Gyrell Lee became involved in a gunfight between his cousin and a nefarious local criminal named Quinton Epps. Throughout New Year’s Eve and into the early hours of New Years’s Day, a verbal confrontation between the cousin and Epps had been esclating. At one point, Lee told investigators, he retrieved his pistol from his car “just in case.” Lee sensed there might be some serious trouble. He was right. Eventually, Lee followed his cousin from the yard where they had been celebrating in order to confront Epps down the street. A fight broke out and Epps shot Lee’s cousin. He was about to turn the gun on Lee himself when Lee drew his pistol and shot first. A jury had to decide whether Lee was the survivor of a self-defense incident, or simply the winner of an illegal gunfight. They found him guilty of second-degree murder.

With or without a gun, it wasn’t safe for any of these defenders to leave a position of safety to confront their individual perceived threats. A firearm allowed each defender to survive their encounter, but each survived at the cost of his or her freedom. In each case, the defender could have avoided the deadly incident simply by not proactively engaging the potential threat. Perhaps if they had been unarmed, they would not have actively put themselves in such a dangerous position. Moreover, the fact that they voluntarily left a position of relative safety to meet the threat caused juries to find their actions to be “unreasonable” — the death knell for any self-defense claim.  The lesson for the armed defender is that you should never enter any situation with a firearm that you wouldn’t enter without it. Never leave a position of relative safety to confront a perceived threat because it will put you at a tactical disadvantage and it will likely undermine your self-defense claim should you be forced to use deadly force. As a concealed carrier, if you go looking for trouble, you’ll likely find it.