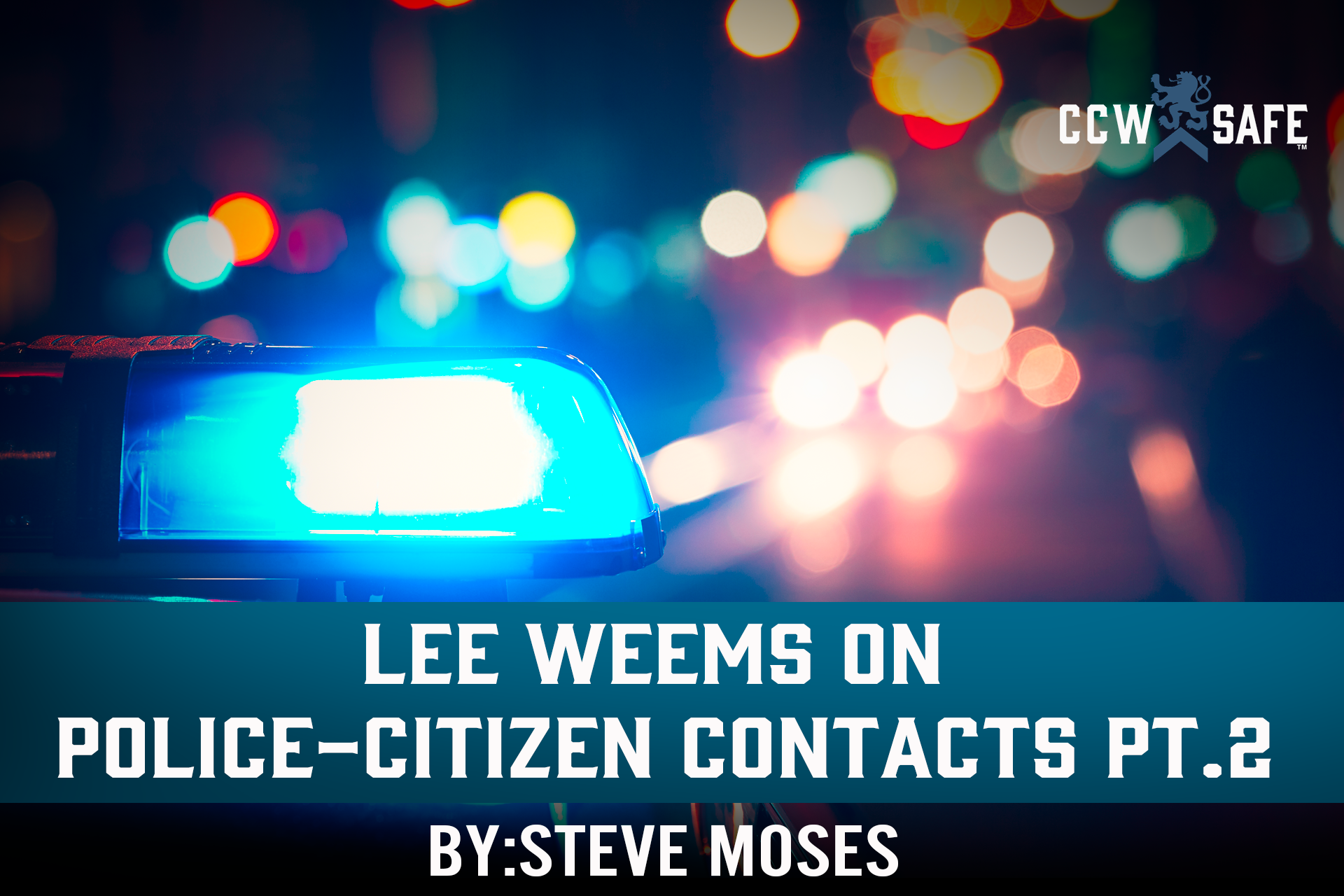 This article was based upon my phone interview with law enforcement and private sector firearms instructor Chief Deputy Lee Weems. The focus of Part One was shedding light on the Fourth Amendment’s prohibition of unreasonable searches and seizures and how that may impact an encounter between peace officers and private citizens. Part Two will hopefully provide some additional insight for private citizens who wish to be more prepared for an encounter with peace officers immediately after an incident in which the private citizen was forced to lawfully use or threaten to use force against another individual or individuals.

I have read a number of outstanding articles by such authors as attorneys Andrew Branca and Don West offering excellent legal advice as to what concealed carriers should do and say when interacting with law enforcement after being involved in a violent encounter based upon the experience of both attorneys’ decades of experience dealing with the criminal and civil courts systems. Lee Weems has over twenty years of law enforcement experience. He has not only been that initial responding officer who has responded to an untold number of 911 calls, he is now a Chief Deputy who is familiar with all of the officers that are under his supervision and now taking those same calls (as well as those that have worked for him in the past).

In other words, he has tremendous insight into what the officers might know or think that are responding to what is essentially a crime scene in which they might get injured or killed. It is truly a dangerous time for both them and the private citizen, even though private citizen was the actual victim of the violent crime.

Lee’s first statement hits the nail on the head: peace officers are not robots. They possess hopes, dreams, fears, and emotions just like everyone else. Regardless of how much training and how high the bar that media and politicians with political agendas have set for them, at the end of the day they still rely on their eyes, ears, training, and what little information they have in their possession at the time in order to do the best possible job they can to deal with situations that are often ambiguous and potentially dangerous. They want to go home alive and unhurt every day after work just like private citizens do.

Lee credits legendary trainer Paul Howe with the following observation: “Private citizens preparing for an encounter with responding law enforcement should always remain visibly neutral.” Private citizens should not do anything that would make incoming peace officers believe that they are a threat to their personal safety.

If sufficiently safe, the private citizen should holster or set aside the handgun and take a step away from it before peace officers arrive or as soon as they are in view. Long guns should likewise be set aside and stepped away from.  However, do not blindly follow this advice if the attacker is still at the scene and represents a clear and dangerous threat who might resume his or her attack at any moment up until the time responding peace officers have obtained complete control of the scene. Citizens might consider taking such actions as loudly announcing to the arriving peace officers that “he still has a gun!” (or knife, etc.) while keeping the muzzle of the firearm aimed at the ground and in a direction away from that which the peace officers are coming, all the while waiting for commands from the arriving peace officers.

Communicate. I can already see the reader’s eyebrows starting to rise.   Non-verbal communication can go a long ways towards assuring peace officers that the citizen is not the problem but the “good guy” in this particular situation. Citizens should remember that not all crimes involve both a good guy and a bad guy, and that in some instances both principals are bad guys. An example may be a fight between two gangs. Responding peace officers may arrive to find that everyone still at the scene may represent a serious risk to their safety. Communication does not mean making a detailed statement, it means making it abundantly clear from the start that you are the victim and the other person was the attacker.

Promptly follow all commands. Lee said that citizens do not need to treat peace officers like royalty, but they do need to avoid doing anything that would suggest that they are a threat to the officer’s personal safety. A non-threatening demeanor and obvious willingness to cooperate with commands is likely to suggest to the responding peace officers that the citizen is indeed the victim of the crime. For those of you that have not spent much time around criminals, some of them are what I might describe as “extremely credible liars” that will likewise try to convince responding peace officers that they were the victim instead. If so, a simple shake of the head indicating that this is not so is most likely in order. Engaging in an argument or making a detailed statement should absolutely be avoided inasmuch as that anything volunteered will likely be included in the officer’s report or video recording and can be used in trial.

Danger often arises from the information forwarded to responding peace officers before they arrive at the scene. Incoming officers are responding a scene that contains a great deal of ambiguity. Not only have they been provided with scant information, much of it can be both confusing and conflicting. 911 operators (that is operators, not operator) may have received multiple calls covering the same incident that relay not only information that is conflicting, but information that is intentionally false.

The intent of this article is not to frighten concealed carriers, but instead to firmly drive home the fact that the physical safety is not guaranteed until law enforcement has arrived and safely assumed control of the scene. One of the last things thing a responding peace officer wants to do is shoot the “good guy”. Shooting private citizens who are not criminals by mistake can end a career and even result in a felony charge. Instead, private citizens will hopefully gain a greater understanding into the challenges facing another human being coming to their aid and remember to take a few actions that can make if safer for everybody involved.

Readers are encouraged to further check out Lee and his training and training-related material. His websites can be found at www.firstpersonsafety.com and www.thatweemsguy.com.