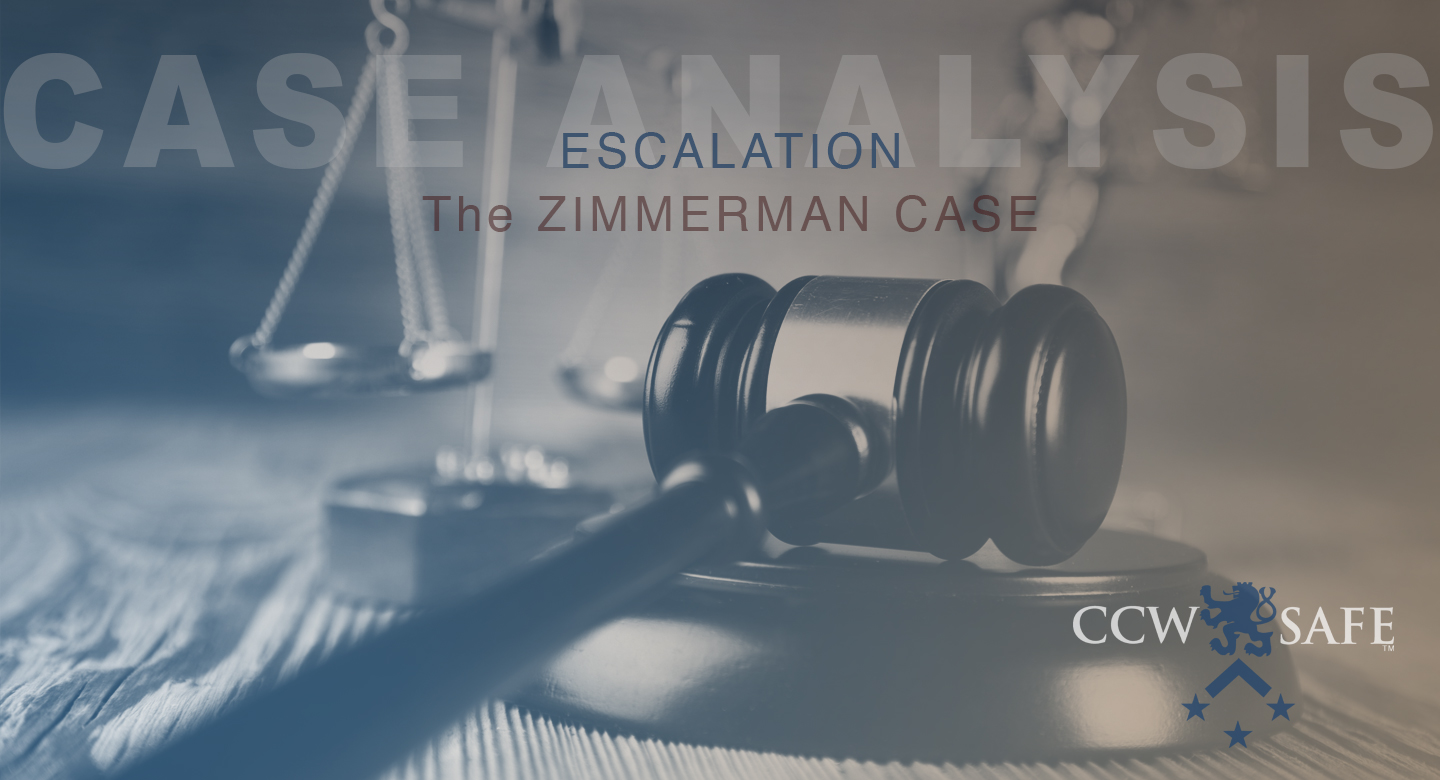 Posted on November 30, 2017 by support@ccwsafe.com in Case Analysis

In a self-defense scenario, actions taken by each party can serve to either escalate or de-escalate the tension between parties. Investigators, judges, and juries will consider every action taken by a shooter when determining whether or not the use of force was justified.

In the Zimmerman case, the prosecution attempted to show that George Zimmerman had multiple opportunities to de-escalate — yet with many of his choices, his actions made the ultimate confrontation with Trayvon Martin more and more inevitable.  During trial, the jury had to decide whether, at any point, Zimmerman’s escalation made him the “initial aggressor,” a designation which could have scuttled his self-defense claim.

Zimmerman initiated the potential for confrontation when he decided to call the non-emergency police line to report Martin as suspicious.  Safe in his vehicle, Zimmerman could have decided simply to report the activity and then drive on to the grocery store, which had been his intention.  Instead, he parked his car in a conspicuous spot along the path Martin was walking.

The next, and perhaps most significant, escalation as explained by the prosecution, occurred when Martin passed Zimmerman’s vehicle, and Zimmerman chose to follow.  As Martin walked approximately a hundred yards in the dark, in drizzling rain, he must have felt threatened as Zimmerman’s Honda Ridgeline pickup truck lurked slowly behind.

Once Martin reached the sidewalk at the end of the road, he made a run for it.  Zimmerman, still on the phone with the non-emergency dispatcher, hastily exited the vehicle and pursued on foot — a major escalation — until advised by the dispatcher not to do so.  Contrary to many media reports, Zimmerman stopped following Martin, but instead of retreating back to the relative safety of his vehicle, which would have been a de-escalation, he chose, instead, to remain on the poorly lighted sidewalk.

After Zimmerman hung up with the dispatcher, he stayed in the area, where Martin, after having eluded Zimmerman returned to confront him.  Even at this moment, Zimmerman had the opportunity to identify himself as a member of the neighborhood watch; he could have disclosed that police had been dispatched; he could have engaged in any number of ways that may have served to defuse the situation.

But he did not, and a physical altercation ensued.  Once the fight started, Martin quickly overpowered Zimmerman, and Zimmerman lost the opportunity to de-escalate.

The prosecutors who tried the case suggested in closing arguments that Zimmerman had drawn his weapon before the altercation, but they could present no evidence to back it.  There was no evidence to refute Zimmerman’s account of the confrontation, and while Zimmerman had multiple bruises and lacerations — Martin’s solitary injury was the single, fatal shot to his heart.

The evidence suggested Martin threw the first punch.  Despite the prosecutor initiating several escalations and failing to take advantage of opportunities to de-escalate, Zimmerman, legally, was not the first aggressor, and it likely contributed heavily to the jury’s decision to acquit on 2nd Degree Murder charges.

The Possibility of Manslaughter (Imperfect Self-defense)

That said, Zimmerman’s actions put him dangerously close to a manslaughter conviction.  Piers Morgan, during his CNN coverage of the trial, echoed a popular sentiment when he tweeted “The fact remains, if Zimmerman had stayed in his vehicle, Trayvon would still be alive.”  While Zimmerman was within his rights to exit his truck, it’s not hard to argue that exiting the vehicle had dire consequences.

Prosecutors could have made a case that Zimmerman, by escalating the situation, should have known that he was putting himself in a situation where he may have to protect himself with his concealed weapon.  They could have argued that Zimmerman’s behavior showed a reckless disregard for human life, and they would have had a much better shot at winning a conviction.

Luckily for Zimmerman, prosecutors were hell-bent on a 2nd Degree Murder conviction, and they made no real case for manslaughter.  However, without Zimmerman’s continued escalations, it’s much more likely that he would never had been charged at all.

Editors Note:  Not all the views in this article reflect the views of CCW Safe.