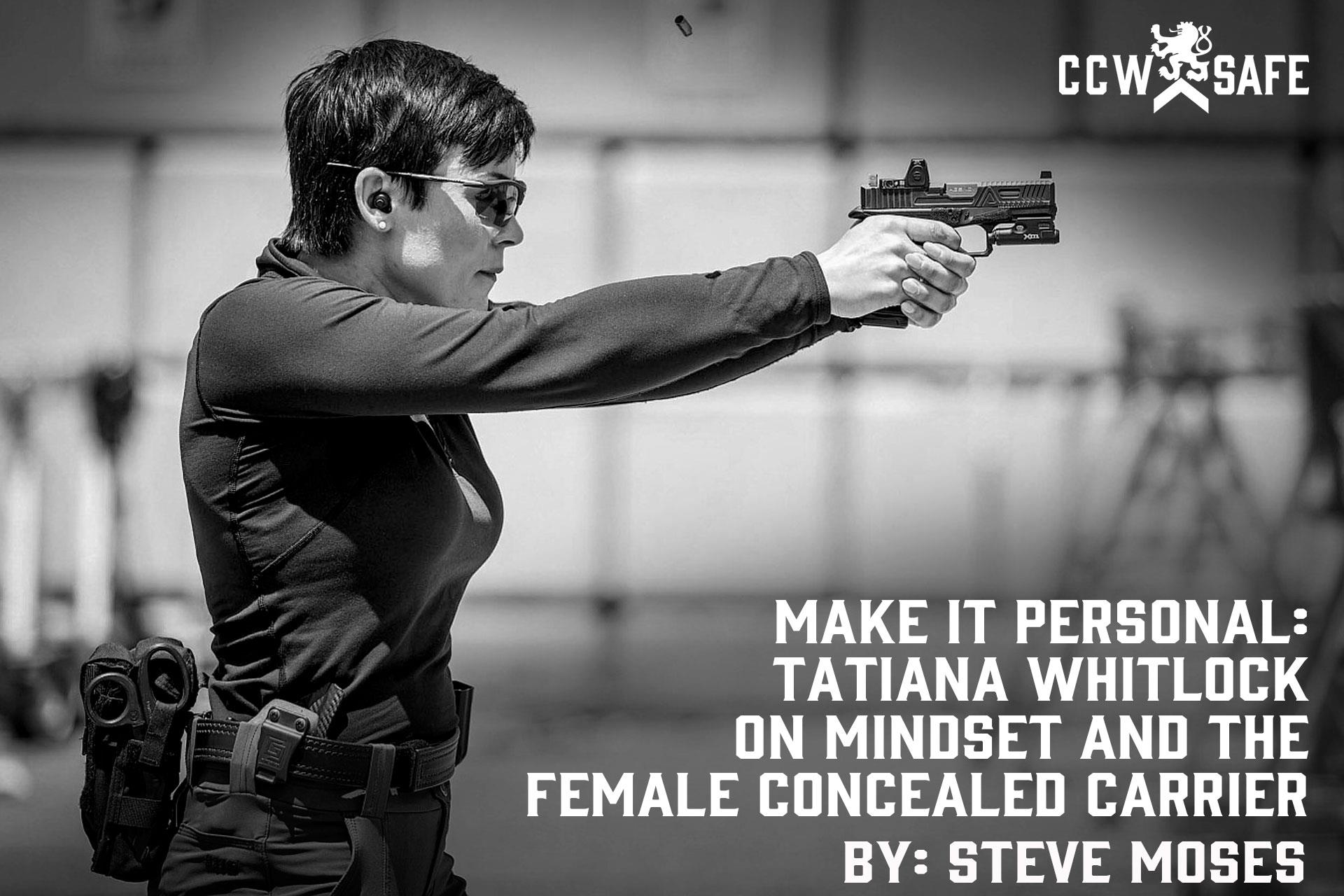 Posted on April 5, 2021 by Steven Moses in Training

MAKE IT PERSONAL: TATIANA WHITLOCK ON MINDSET AND THE FEMALE CONCEALED CARRIER PT. 1

By now, CCW Safe members should already be familiar with Tatiana Whitlock. She has appeared on multiple podcasts with Shawn Vincent and Don West as well as in several articles written by Shawn Vincent. She is a member of the Walther shooting team, an Account Strategist for San Diego marketing agency Fidelitas Development, Director of Training at the Howell’s Indoor Range and Shooting Academy in Gray, Maine, and Director of Training for A Girl and a Gun, which is a national women’s shooting league. Tatiana is an annual instructor at the Rangemaster Tactical Conference, which is where I first met her.

I recently interviewed Tatiana and requested her insight into steps that female concealed carriers might take to not only understand what a strong survival mindset is but take advantage of it. Before any reader can take umbrage with my use of the term “survival,” please take note that I am fully aware of some who instead prefer words like “fighting”, “combat”, and even “winning.” I purposely chose “survival” because I believe that there is more to proper mindset than just defending ourselves in actual physical combat with another person who is attempting to harm or kill us. Deterrence and de-escalation come to mind. Set out below are some great takeaways from my conversation with Tatiana Whitlock.

Steve:   Let’s talk about the term “mindset.” How do you define mindset, especially when we are talking about female concealed carriers? It is hard for me to fully understand what that might look like from their perspective of persons that are typically smaller and less aggressive than their male counterparts.

Tatiana:    The definition of mindset has many different meanings, and the term “mindset” has become a blasé word that has lost much of its weight and brevity due its overuse in the training community. Another word that is often overused and misinterpreted in the female training community is the word “empowered.” Both are words that are used all the time when marketing to female shooters.  The definition of mindset ideally should come from a process of internalizing unique to each individual. Mindset is the core reason why female concealed carriers are motivated to learn how to defend themselves. Most women joining the training community and training with me will simply say that they are here for self-defense purposes. We can get to a more exact definition quickly by drilling down deeper to find out what mindset means to each individual. It will come down to a very personal reason for each person.

There may be a story from a previous life experience that resulted in their decision to never let that happen to them again. Never again will they allow themselves to experience that level of violence or amount of fear.  For others, it may be that they are acutely aware of what has happened to other women and want to make sure that it can never happen to them. Mindset in the women’s training community is far more than “rah, rah, we are awesome!” followed by high fives and giggles. Instead, it comes from a very deep place in each individual, and the initial realization of what it means can be a very sobering moment. Mindset is an anchoring place, and for each person the root experience is unique to them. Women often experience a powerful feeling once they understand what this mindset means to them, as it plays a huge part in their ability to play a major role if it ever becomes necessary to defend themselves and possibly their loved ones.

I mentioned earlier the need to “drill down deeper” earlier with students to help them identify what it is they wanted from a training class. Standard answers are usually “I want to defend myself” and “I want to be safe.” I tell them that is not enough, please keep going. I might then hear “I want to keep my family safe.” My response to that is this is still not enough, please keep going. I keep the students drilling down to the root, which will be sense of self, a sense of self-preservation, and a sense of self-worth. At some point, the students will start drilling me and asking me what my motivation is. My response is: “I carry a gun so that no one can take me from this earth but God.” The students will almost always look around the room, and then nod.

Rangemaster instructor Lynn Givens has another response that I like: “I do not carry a gun so I can impose my will on someone else. I carry a gun so someone else cannot impose their will on me.” Women should have a similar short, concise mission statement that starts the moment that they get up in the meeting. Have your gun on your person when you can, and make sure that you have less lethal tools such as pepper spray on your person when you can’t.

Steve:   How does each person cultivate their own individual mindset?

Tatiana:   We cultivate mindset by going through a variety of visualization drills. I do a lot of these drills in my classes. The goal is to hit some memory center or emotive cues not to bring people to tears but instead to make it real. We will go through an exercise where they must visualize a scenario such as they are walking alone through a parking garage, then with an adult peer such as a co-worker or sibling, and then keep escalating from there. Eventually they are with their family, including children that are right behind them.  Each subsequent scenario is more and more personal, and it can become quite emotional for a student who is visualizing not only herself being threatened but also her family.

By the time we are done they have now built that foundation and are typically far more able to elicit the necessary defensive skills and apply them. The myelination process (editor note: increase in the fatty sheath that surrounds neuronal processes which increases the efficiency of electrical transmission and enables information to be transmitted and processed faster) is deep and can root those skills in place where they can get to them if needed.

This builds confidence in one’s ability to execute a critical task on demand. By the end of the day our beginning students now understand why they bothered with training. Mindset in the form of a strong mission statement that is unique to each person and the ability to apply core skills makes sense to the students because they now understand what reality might look like. Once this is done, it is hard for each student to not take those actions each morning that continues to cultivate their individual mindset.

Part two of this article addresses Tatiana’s response to my questions of why is it okay to feel fear, and how do I overcome my fear and do what I need to do.