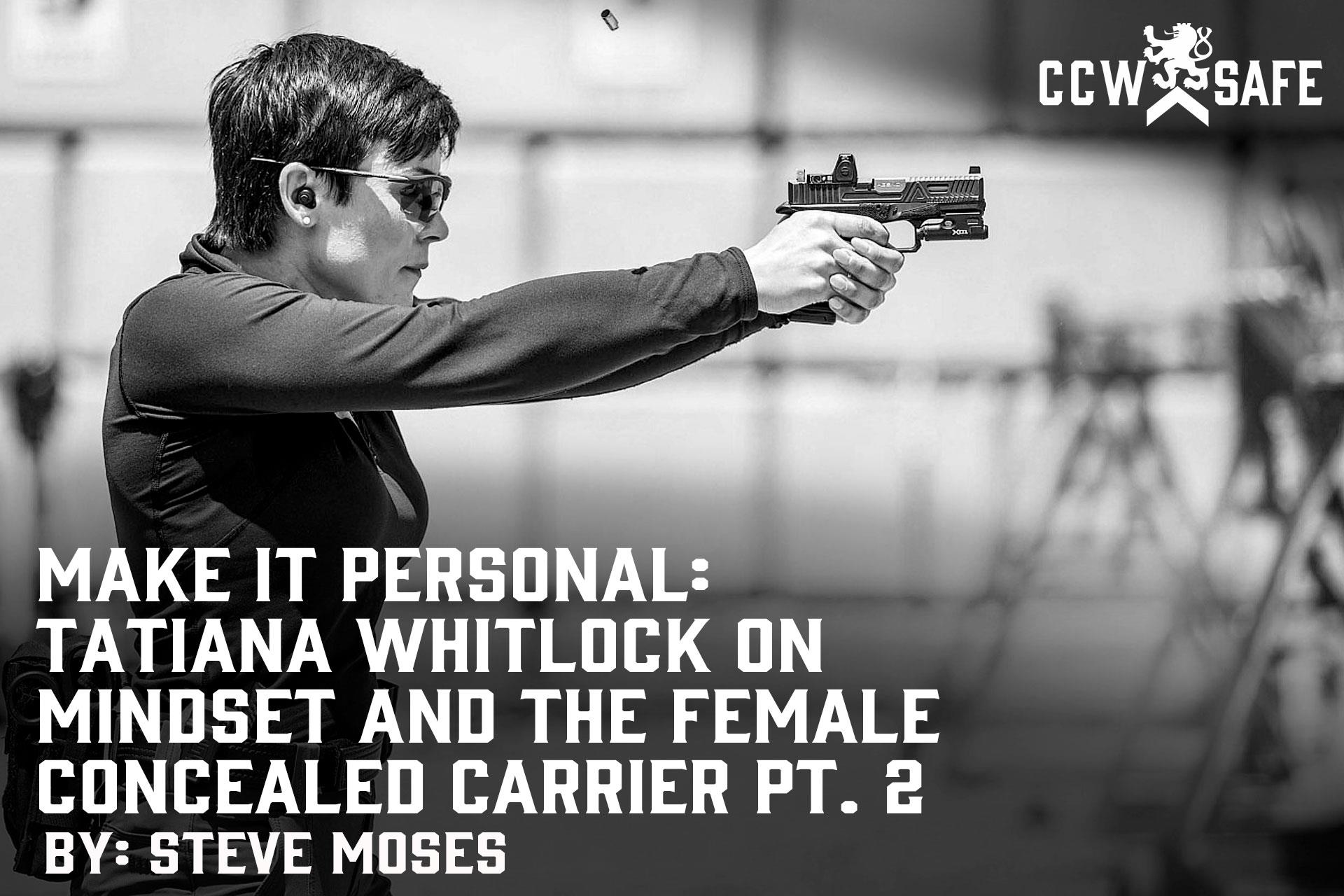 MAKE IT PERSONAL: TATIANA WHITLOCK ON MINDSET AND THE FEMALE CONCEALED CARRIER PT. 2

Steve:   I believe that bravery is not the absence of fear, but more of a willingness to act upon something that needs to be done regardless. My law enforcement career was relatively drama-free compared to some other officers that I know of, but I did experience fear on the job. What advice do you have for female concealed carriers who will almost certainly experience fear under certain circumstances?

Tatiana:   Fear/Intuition is your body’s way of giving you a bit of a head start. Everything we do to train space, distance, and more opportunities for ourselves the better. The problem is that we are culturally trained and conditioned to ignore our intuition and doubt ourselves and our natural responses to circumstances. We can literally rationalize our way into a place of passivity. This can be deadly from a woman’s standpoint.

Steve:   I try to impress upon our students that fear is natural and nothing to be embarrassed of. I found that whenever our Special Response Team was making a high-risk forced entry that when we were moving up to the final assault position that I was scared. Fear is a very real thing. It helps when I remember that true bravery is not allowing your fear to stop you from doing the things that need to be done regardless.

Tatiana: You can harness fear. It should be acknowledged and not pushed aside. You simply can’t ignore it. It is a useful tool, and we would not have survived as a species if we did not have that emotive response to danger.

Steve:  How do you overcome fear enough to fight back? I think you have touched on that already, but perhaps you could elaborate some more.

Tatiana:   Put yourself in training situations, classes, lectures, etc. that push you and allow you to expand well beyond your comfort zone. I am not a big fan of staying in your comfort zone. For instance, take that next class where you know that you won’t be the top student. I don’t want to take a class where I know that I am going to be the top student or will be able to ace it without a problem. I want to push myself to the point that I am literally failing because I am attempting to perform past the boundaries of my current skillsets. This means I am attempting to perform at a level that I am unable to continuously maintain. You must be willing to push yourself to levels where you may fall on your face in class in front of your peers, which may mean participating in classes in which you are uncomfortable.

For most people, the fear of failure in front of others is a real thing. However, what we are doing is training the brain to get “comfortable” with fear and confident that if you find yourself in a fearful situation that you can go ahead and push through it. We are fearful, we act anyway, and the benefits derived in terms of confidence start to outweigh the negatives of failing a drill, performing a skill or technique incorrectly, or throwing a shot.

This can allow the student to quickly overcome any normalcy bias and act more quickly. Individuals that show up to classes and put in the hard work, diligently practice afterwards, attend lectures, read books, and watch or listen to podcasts fare especially well. These people stay educated, and since they are always pushing their boundaries are always just a little bit better than they were the day before. These people are performing close to the top of their game and are more likely to have the ability to override their fear if caught up in a life-threatening situation. Overcoming fear is a form of personally induced conditioning in which the trained female concealed carrier can benefit from the fear response because of the body’s release of chemicals that can enhance physical performance.

Steve:   Do you think that competition is a good tool for persons wanting to become inoculated against “freezing up” because of the anxiety and fear of performing poorly in front others?

Tatiana:   Absolutely! It doesn’t matter whether it is a competition or a potential encounter with another person who might be dangerous, stress chemicals are stress chemicals. The brain does not care if it is a competition or a lion trying to eat you. Competition is a safe, structured environment where not only are you forcing your body to perform under stress but at the same time you are developing and maintaining critical skillsets specific to gunhandling, manipulation, accuracy, and speed while you are solving problems (such as following directions, managing the stage, and complying with all rules of the overall match). This applies to force-on-force exercises and shoot-house classes.

Steve:   This has been a great interview. It is hard for me to fully appreciate the impact that culture has on the female mindset. As an instructor, I am going to have revise my lesson plan so that I can do a better job of covering the subject of mindset in classes in which we have female students. Thank you so much for making my job easier!

Tatiana:   It has been my pleasure.