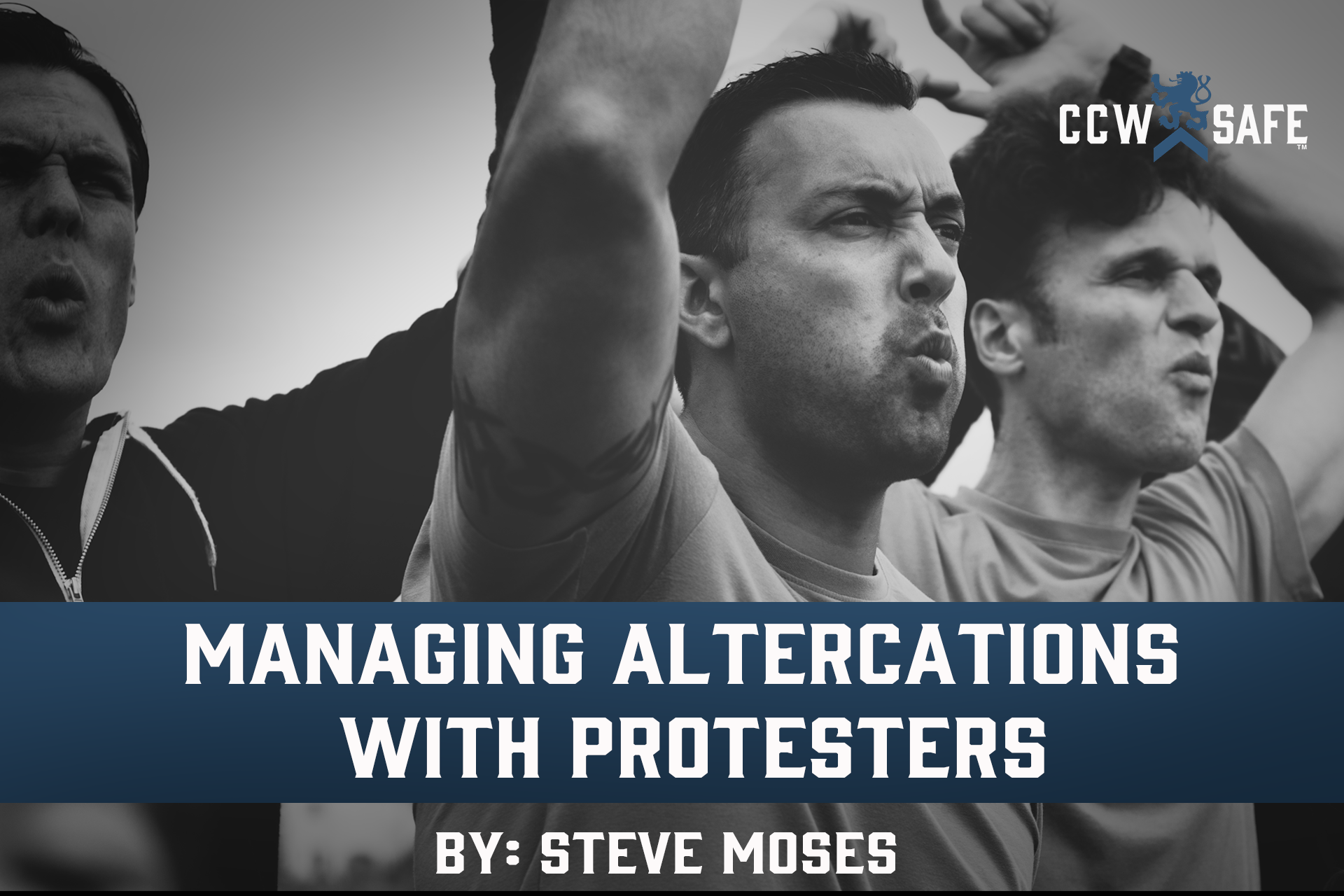 I have never had an altercation with a protester. Even if I had, my limited experience or experiences would not make me an expert on the subject. The only reason that I am writing on this subject at all is my belief that many concealed carriers have given little or no thought to how they might manage an adversarial verbal exchange with what I am going to generically refer to as a protester. I have absolutely no issue with a protest that is both peaceful and lawful.  However, there may be persons within a group of protesters whose motivations also include general anarchy.

Since it is difficult to tell what the intentions of every single member within such a group are, there is much to be said for being prepared for the worst possibilities. I have heard realtors say that the three most important factors when it comes assessing the desirability of a specific property is “location, location, location.” It might not be unreasonable for concealed carriers to describe the three most important factors when it comes to mitigating the amount of risk to life and health posed by one or more protesters with questionable intent is “distance, distance, distance.”

I believe that there is nothing to gain by entering into an argument with another person, and that is especially true if that person is a protester. I have seen over and over a heated exchange suddenly turn into an assault where one person was savagely attacked by as many as six or seven protesters. If only it were as simple as simply keeping one’s mouth shut in order to avoid getting engaged into an argument with a protester. Simply standing in place quietly while another person shouts in one’s face is sometimes not enough. This seems to be a consistent response by a person when confronted by a protester. That is, they sometimes just stand there while a protester blocks their path and then patiently wait and likely hoping that the protester will soon finish yelling and then amble off. On occasion, a well-intentioned person will make a polite attempt to de-escalate the situation, but a de-escalation attempt does not work if the antagonistic party is not willing to be de-escalated. On multiple occasions I have observed a protester attack anyway if their goading does not achieve the desired effect.

I am very much of the opinion that one of the most important skills that a concealed carrier can possess is the ability to move and manage distance based upon the existing circumstances. A concealed carrier who sees group activity that differs from the norm at a distance might well be best served by immediately increasing their distance from the crowd.  Tempting as it might be to “hang around” at the edges and just watch the excitement (which is sometimes almost an irresistible urge), not being in the same place when something bad suddenly goes down is a good way to avoid having future deep regrets.

What about the protester or protesters who suddenly come out of nowhere with the express purpose of engaging the concealed carrier? In most instances those persons actually did not come out of “nowhere”, but events like that can happen to even persons who constantly try to be aware of everything that is going on around them.

While I have never been accosted by protestor, over the years I have been confronted maybe a half-dozen times by persons who appeared to be agitated. Sometimes I was aware of the cause for their agitation and other times I was not. I found that by changing my direction and briskly walking off at an oblique angle was all that it took to apparently catch the other person by surprise and permit me to safely disengage while keeping them in my peripheral vision. On occasion, I would hear some trash-talking take place while I was creating distance, which I just ignored. I have no idea exactly what my accosters were thinking when this took place, but I was quite certain that the action that I had taken was not what they expected.

Granted, in the midst of a protest the mentality and motivation of the players are likely different, and persons caught up in the moment can be seen on videos or even national television on a near daily basis in the act of assaulting and even murdering others. To that end, it would not surprise me at all if my taking the action described above failed to dissuade a protestor (or protesters) from pursuing me. It is my opinion that the same action described above provides all or some of the following benefits:

Again, I have never been accosted by protestors and everything stated within this article is based upon theory, not actual experience. Having said that, my default action if imminent contact with a possible protester is likely is always going to be to MOVE unless there is reason to momentarily hesitate in order to gain additional information so that I can then MOVE as soon as possible in a direction that I believe to be the safest.