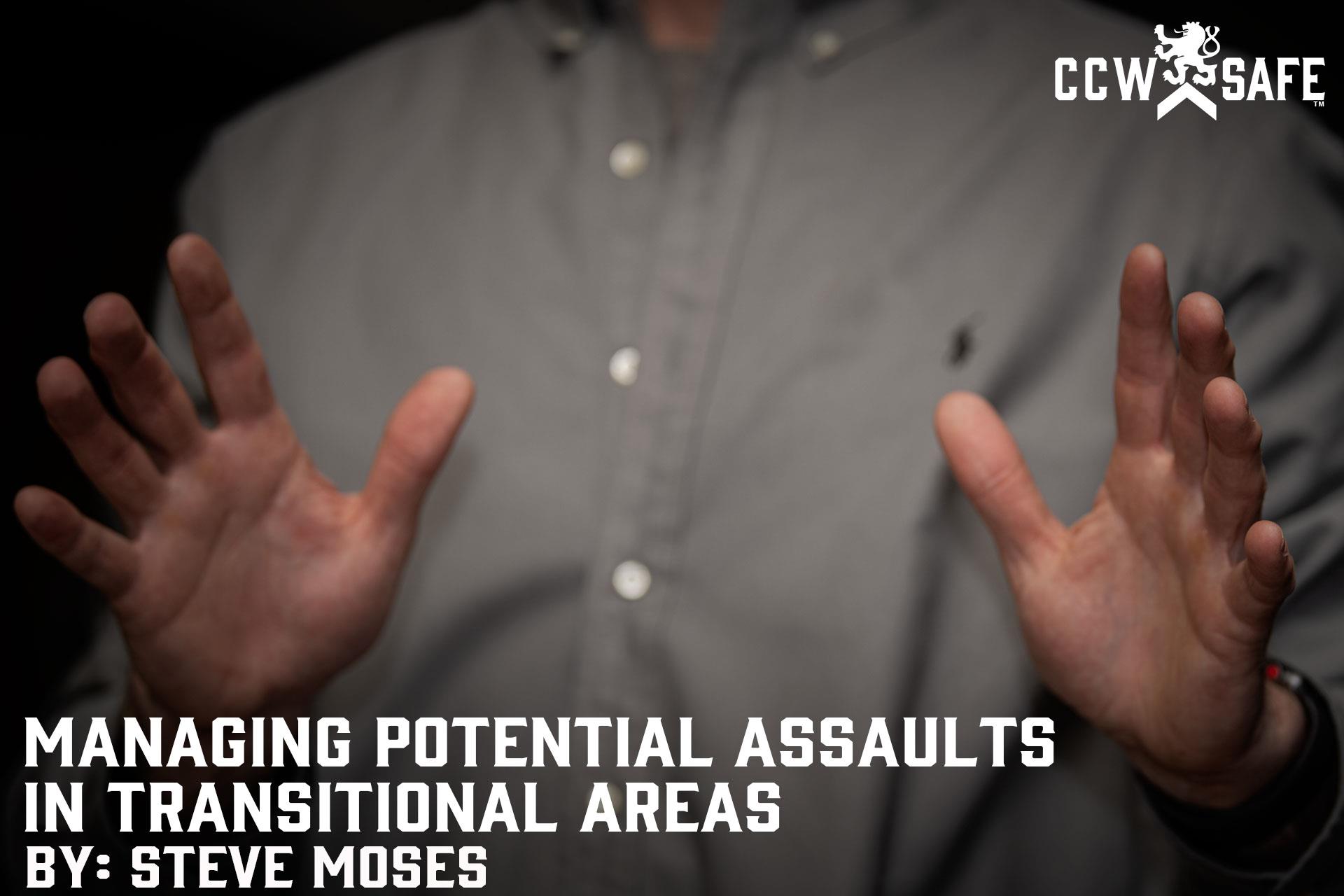 Posted on November 15, 2021 by Steven Moses in Uncategorized

“Avoid-Deter-De-Escalate-Disengage-Defend” is advice that is often given to concealed carriers with much emphasis placed upon Avoidance, Deterrence, De-Escalation, and Defense. What I see less commonly discussed is the subject of Disengagement, and yet active disengagement is a hard-wired response to danger inherent to virtually every living fish, reptile, amphibian, bird, and mammal on Planet Earth.

Transitional areas might be defined as any area in which a concealed carrier might occupy that represents a bridge between a home base and a temporary destination. Examples of transitional areas are streets, sidewalks, parking lots, parking garages, and gas stations. For instance, if I need to leave my house and drive to an office building or a grocery store, I will need to get in my car (which could be in a parking lot or parking garage if I live in an apartment or condominium), drive on a road, street, or highway, and park in a parking lot. From there I would walk to my destination and then literally retrace my path assuming that I did not need to stop off and get gasoline, which would require my spending more time in another transitional area.

The problem for concealed carriers in transitional areas is that it is common to be around people that they do not know and their ability to constantly manage the distance from other persons is compromised. It is not uncommon to me to be anywhere from four to thirty feet from others in transitional areas. How well can we manage our distance from others while grocery shopping, waiting to check out at Wal Mart, when seated in a restaurant, putting gasoline in our vehicle, or immediately after parking in a lot open to the public? The problem for concealed carriers in transitional areas is that the chances of encountering someone who might wish them harm for whatever reason (robbery, road rage, personal or political conflict, sexual assault, kidnapping, etc.) are much greater than they are in the home or office.

Once the decision to engage has been made (that is, the aggressor has selected me as his or her target and is about to or has started to close in on me) I no longer have the opportunity to escape their detection and any prior attempt on my part to deter them has failed. While de-escalation might be possible if the initial motivation of the aggressor was road rage or personal or political conflict, it likely will not work if the motivation instead is robbery, sexual assault, or kidnapping. That pretty much just leaves disengagement or defense, and disengagement (if possible) by far has the fewest downsides.

I think that making the decision well in advance to disengage if a confrontation appears imminent is critical to success. The “OODA Loop” theory developed by a military strategist named John Boyd explains in depth the four steps of effective decision making, which are Observe, Orient, Decide, and Act. The person in an encounter that works through the loop the fastest will typically have an advantage over the other. A trained person can go from Observe to Act (which in this case is suddenly changing direction and walking away) in an incredibly short amount of time since very little time was spent on making a decision.  In most instances a potential aggressor has only a few options available to them, which are to discontinue their approach, follow, rush, attempt to cut off their target, or even produce a firearm. A positive (for those who are predisposed to think that way) is that not only has the aggressor’s intent been revealed but that it occurred at a greater distance.

I have not given a lot of thought to specific technique when it comes to disengagement other than to initiate it immediately if being approached by a person or persons whose intent is questionable. For the most part, persons closing distance with bad intent on another person are usually displaying non-verbal pre-assault clues which can range from conspicuously obvious to relatively subtle. I can either start moving without saying a word or initiate movement upon saying something to the effect of “do you mind staying back?” Anytime I discuss this subject with some of my peers one or more will suggest saying something different like “can you give me some space?” or something similar, which can work also. My preference will always be to start with a polite request and avoid any statements that might cause another person to think that they have been “disrespected.”  The majority of the time the approaching party will comply for the simple reason that the majority of people in the United States are decent persons not interested in assaulting others. It is the persons that will not comply that are the problem, and the sooner that I can take an action that may reveal his or her ultimate intent, the better.

While living in downtown East Dallas for two years I had numerous encounters with “unknown contacts,” which is a term that Craig Douglas uses when teaching a block of instruction that he calls “Managing Unknown Contacts.” Those encounters took place on sidewalks, outside of a bus stations, restaurants, inside of stores, on parking lots, and once at a gas station. I quickly discovered that the terrain often dictated how and where I moved.  My preference has always been to start arcing around the questionable person, but there have been times when I took off at a right angle and once when I actually turned around and went back the way that I came (that was the only way that I could gain distance).  At no time did I lose visual contact with the other person. There were three occasions when the other person continued to move in on me in which I sharply said: “Stay Back!” at which time the other person immediately turned around and walked the other way.

What if disengagement does not work? That is where lawful self-defense comes to play. This article was written for the purpose of asking concealed carriers to focus on the part that disengagement plays in successfully breaking contact and to give some thought about how they might go about it. If I am forced sometime in the future to use less lethal or deadly force in order to save my life or that of a loved one I would definitely like to be able to say that I first made a concerted effort to disengage, or that I was unable to disengage which therefore left me with no other option to defend myself but to use force.