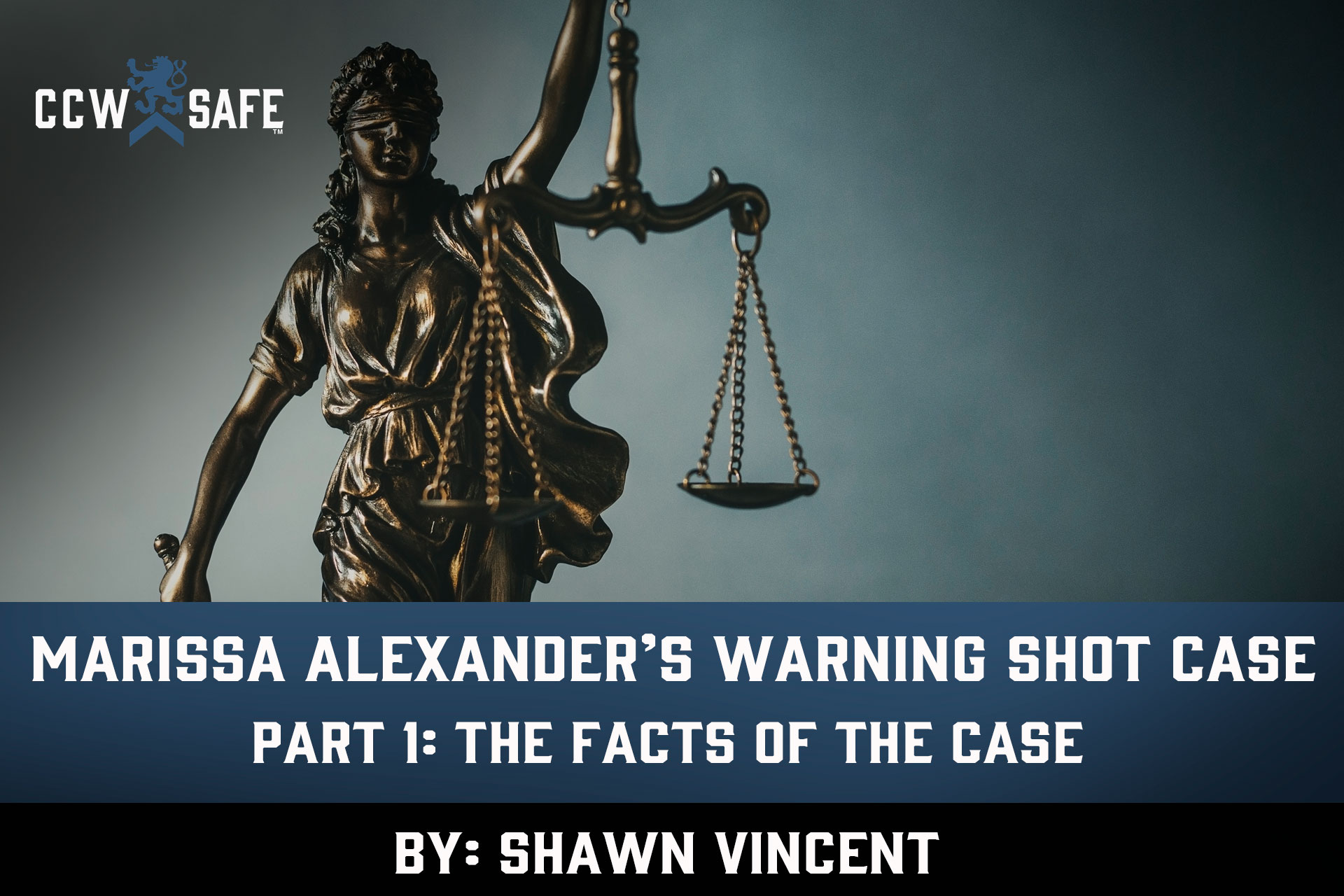 Posted on December 13, 2019 by Shawn Vincent in In Self Defense

Part 1: The Facts of the Case

Marissa Alexander spent 1065 days behind bars for firing a single warning shot while in her own home — a shot that injured no one. Not long ago, she shared her story on the CCW Safe podcast, giving us a rare look into the mind of a defender who was at the center of a controversial self-defense shooting. For concealed carriers, Ms. Alexander’s story provides some important lessons pertaining to dealing with threats of violence, retreating and re-engaging during a conflict, dealing with law enforcement, and the dangers of firing warning shots. Her long journey through the legal system, which included an immunity hearing, a trial, an appeal, and a plea, illustrates the difficult legal fight that can ensue from a self-defense shooting, even a shooting that resulted in no deaths and no injuries.

But before we get into all that, here are the facts of the case:

In the summer of 2010, Alexander had given birth to a premature baby. She claims that physical abuse from her estranged husband, Rico Gray contributed to the early labor. Alexander had obtained a restraining order against her husband, a contact with no violence order that permitted communication but forbid hostile interaction.  In the days following the birth, Alexander was staying with her mother while she recovered from the difficult labor.

On August 1, Alexander went to the marital home she had once shared with Gray to retrieve some items. While she was there, Gray arrived, accompanied by his two sons from a previous relationship. While looking photos of the newborn on Alexander’s phone, Gray discovered some text messages that, as Alexander explains, sent him into a “jealous rage.” She says Gray cornered her in the bathroom and attempted to choke her. She fought her way free and ran to the garage where her car was parked, but she realized she didn’t have her keys, and she claims she couldn’t get the garage door to open. Unable to escape, she retrieved her pistol from the car, and she went back into the house.

Gray was still there, and Alexander encountered him in the kitchen. The children were heading out the front door. He saw her firearm, and seemed unperturbed. Alexander claims Gray threatened to kill her. She fired a single shot. A “warning shot” she called it, but unlike a shot straight in the air, this shot was in her estranged husband’s direction, a few inches above his head and a few inches to his left. The bullet entered the wall above the refrigerator, next to the arch where Gray was standing, and it pierced the ceiling in the next room.

Gray left. While Alexander finished collecting her things, Gray called 911 and reported the shooting, and the story he told police was one of Alexander threatening him with a gun in the presence of his children. Law enforcement tried to reach Alexander on her cell phone, but she missed the calls. Eventually, her sister reached her, and informed her that the police were outside. Apparently, her husband said she was barricaded in the house with a weapon. There was a rumor that the police considered calling the swat team. When asked why she didn’t call the police, she answered, “To be honest with you, I didn’t think I did anything wrong.”

Police questioned Alexander for a number of hours, and feeling confident that she was in the right, she answered their questions without the advice of a lawyer. Soon she was arrested, and by the end of the day, she was booked in. Eventually, the State’s Attorney in Jacksonville, Florida would charge Alexander with aggravated assault with the discharge of a weapon, a charge which, at the time, carried a twenty year mandatory minimum sentence.

The state made an offer for a lesser charge that would carry only a three year sentence, but Alexander, adamant that she was justified, pushed forward with her legal defense. She testified at a self-defense immunity hearing where her lawyers asked a judge to throw the case out, citing the state’s controversial stand-your-ground law. The judge did not grant immunity. Later, after a two day trial in May of 2012, a jury found Marissa Alexander guilty, and the judge had no choice but to impose the mandatory minimum sentence of 20 years.

Alexander appealed her conviction, and three years later, the appellate court agreed that the jury at her trial had been improperly instructed. Faced with the prospect of a second trial, and having already served 1,000 days behind bars, she finally accepted the state’s offer of three years, and she pled to a lesser charge. With credit for time served, in 2017 she spent a final 65 days in jail.

Over the next several weeks, we’ll take an indepth look at the Marissa Alexander case with an emphasis on identifying the lessons learned for concealed carriers. Next week we’ll focus Alexander’s claim that Gray threatened to kill her, and we’ll explore when a verbal death threat can and cannot justify the use (or the threatened use) of deadly force.