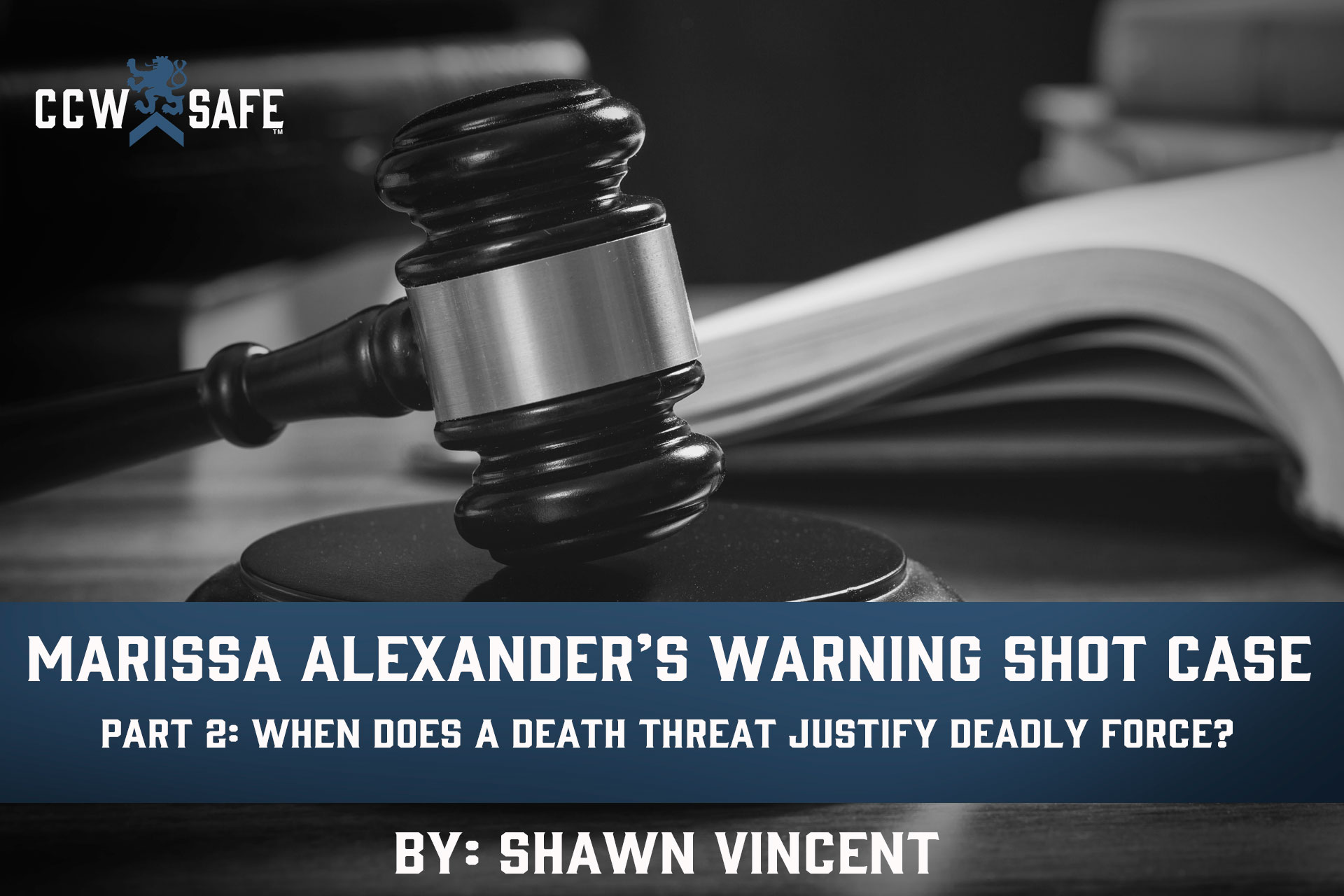 Posted on December 20, 2019 by Shawn Vincent in In Self Defense

Part 2: When Does a Death Threat Justify Deadly Force?

From Alexander’s point of view, the facts were on her side. Just moments before she fired the warning shot, according to Alexander’s testimony, Gray cornered her in the bathroom of their marital home and, in a “jealous rage,” attempted to choke her. She says the abuse she suffered previously caused the premature birth of her baby just nine days earlier, and she had successfully petitioned the court for a contact with no violence restraining order against Gray, which he had just violated. When she escaped his clutches, Alexander, a licensed concealed carrier, retrieved her pistol from her car in the garage. When she encountered Gray again in the kitchen, he saw the pistol and threatened to kill her. That’s when she fired the single warning shot, which penetrated the wall several inches away from where her husband was standing.

Unfortunately for Alexander, not everyone saw things from her point of view. If she was truly in fear for her life, why did she return to the living quarters of the house after escaping to the garage? Why did she linger in the home after Gray retreated from the warning shot? (She had been staying in another home with her mother while recovering from childbirth.) Why didn’t she call 911 to report the event?

Police responded to the shooting after Gray called 911, and because Alexander wasn’t answering her cell phone, police became concerned that they were dealing with a volatile individual who had barricaded herself in the home with a firearm. She had to surrender herself to the police who had surrounded her house. After questioning, she was arrested on assault charges and ultimately spent 1065 days in jail.

In a recent CCW Safe podcast, Alexander says that she believed her estranged husband when he threatened to kill her, citing the long history of violence in their relationship. The police, obviously, didn’t find the threat credible; neither did the prosecutor, nor the judge at her self-defense immunity hearing, nor the jury at her trial.

Don West is a veteran criminal defense attorney and National Trial Counsel for CCW Safe. I asked him whether a verbal death threat is enough justify the use of deadly force. He says that depends on whether the person issuing the threat actually imposes an imminent threat of great bodily harm or death and has the capability and intent at that moment to carry out that threat.

“Just because somebody says, ‘I’m going to kill you,’” Don says, “even if you accept that to be true, that is not from my perspective in and of itself enough for you to pull out a gun and shoot somebody.”

Granted, Alexander didn’t shoot Rico Gray, but she did shoot towards him, missing him only by a matter of inches. Firing a gun towards someone is using deadly force, whether anyone is fatally wounded or not, and we have written before that, as a general rule, you’re not legally allowed to display weapon in self-defense if you weren’t otherwise legally justified in using deadly force. That goes for discharging a firearm as well.

What Don is suggesting, and what a judge and jury eventually decided, is that — notwithstanding the verbal threat — true intent or imminent ability just wasn’t there, and therefore, Alexander’s warning shot was not reasonable. “Ultimately, from the jury’s perspective, all of that had to be reasonable. There’s this overriding analysis that looks at the totality of the circumstances that takes everything into account, and a jury has to answer the question ‘Was the response to the threat reasonable?’”

In this case, the totality of the circumstances includes the fact that Gray was unarmed, that Alexander had retreated to a place of relative safety and then reengaged, and that she failed to call 911 to report the shooting.

The lesson for concealed carriers is that a verbal death threat alone is not enough to justify the use of deadly force; there must also be true intent and imminent ability to follow up on the threat. When the defender is armed and the aggressor is not, like in the Alexander case, the imbalance of power makes a self-defense claim even harder to justify. Moreover, the threat and the decision to use deadly force will be judged in the full context of the encounter, and your behavior before and after the event will have an impact on whether others find your actions reasonable.