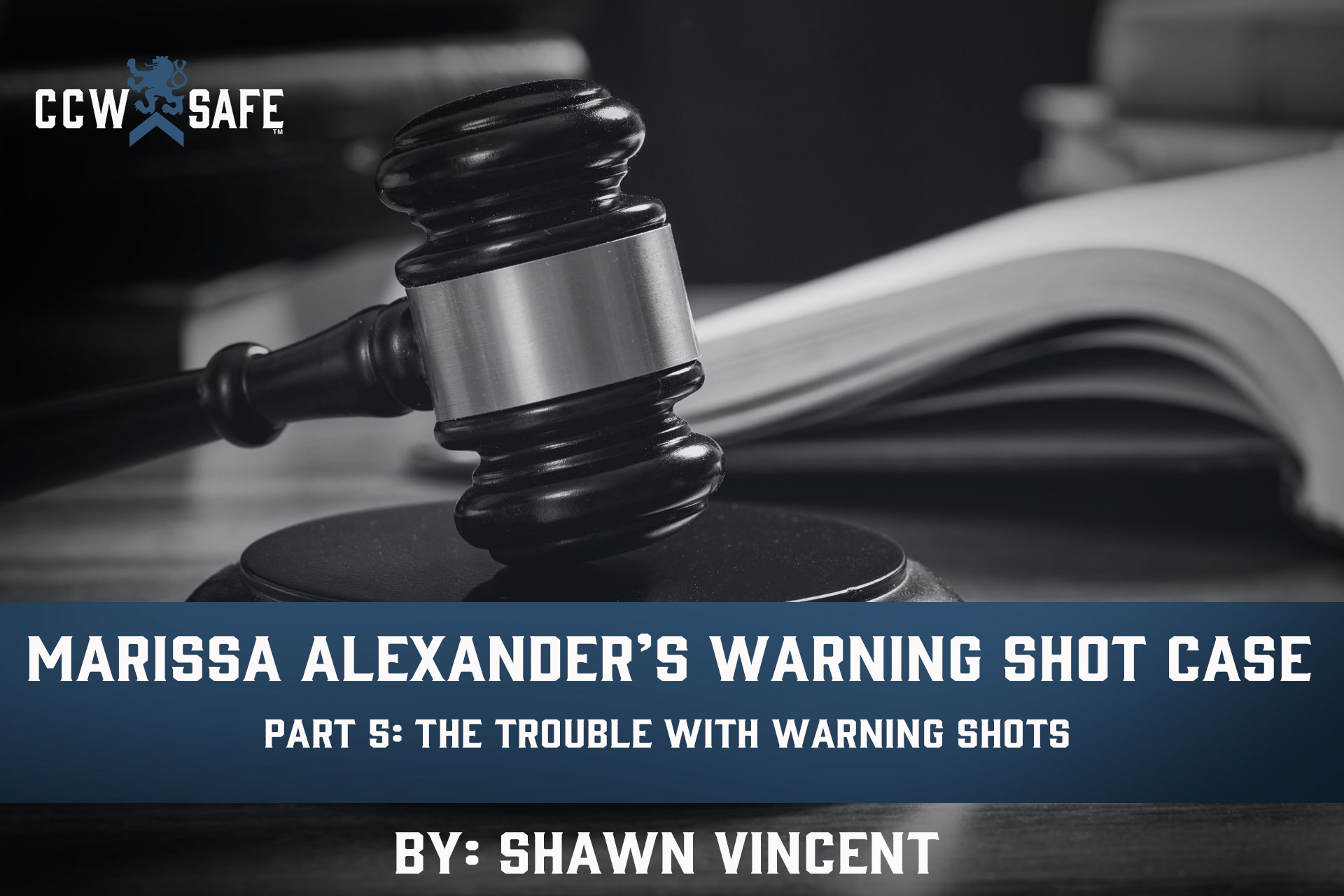 Posted on January 10, 2020 by Shawn Vincent in In Self Defense

Part 5: The Trouble With Warning Shots

After a violent encounter in which Marissa Alexander’s estranged husband, Rico Gray, tried to choke her, Alexander retreated to the garage and retrieved her pistol from her car. Then she went back into the house where she encountered her attacker again.

“So that was in the kitchen where he came and confronted me,” she says. “He saw me with my firearm, threatened me, and that’s when I fired my warning, my shot. He didn’t see my gun and run. He didn’t do that. He saw it and decided he will threaten to kill me.”

The warning shot struck the wall in the kitchen a few inches above the refrigerator and just to the side of an arch where Gray was standing. The bullet entered the ceiling in an adjacent room.

We’ve written about a few of the problems Alexander had with her self-defense claim: the fact that Gray was unarmed, the fact that she left a place of relative safety to re-engage, the fact that she failed to call 911 and report the shooting. But it was the actual firing of the warning shot proved to be her biggest mistake. After a short two-day trial, a jury convicted Alexander of aggravated assault with the discharge of a firearm. She ended up serving 1065 days behind bars.

Alexander’s case drew national attention because, between the shooting in August of 2010 and her trial in May of 2012, the shooting of Trayvon Martin dominated the headlines. For many, it seemed completely unjust that George Zimmerman would use Florida’s controversial stand-your-ground law to justify shooting a young black teen while Alexander, a black woman and victim of domestic violence, would be denied that protection, even though the shot she fired killed no one and injured no one.

While Alexander’s sense of injustice is not completely unwarranted, it does tend to short thrift the seriousness of firing a gun in self-defense — even if it was intended only as a warning shot.

Not long ago, I spoke to CCW Safe National Trail Counsel Don West about brandishing. “When we talk about brandishing,” he says, “we are talking about an aggressive act that is a crime in and of itself, and it can have very serious consequences.” Aggravated assault convictions can result in significant jail time. The general rule is that if you’re not justified in using deadly force, you’re not justified in displaying your weapon in a threatening manner.

If that’s true for brandishing a weapon, then it’s certainly true for discharging your firearm. “Firing a gun is deadly force,” Don West says. “The entire criminal justice system looks at it differently because when the bullet leaves the barrel of a gun, it’s death in the air.”

During a CCW Safe podcast, Marissa Alexander said, “To be honest with you, I didn’t think I did anything wrong. I was in my home and nothing happened.” Clearly she was mistaken. When she pointed the gun at Gray, she committed aggravated assault, and when she fired the weapon, it triggered an enhancement, which at the time in Florida, could result in a 20-year mandatory minimum prison sentence.

Don West says, “When you draw a gun and you point it in the direction of somebody, and you fire the gun, you have committed a crime right then, a very serious crime — unless you have the legal justification to do that.” And it’s not up to the shooter to determine whether firing a weapon in self-defense is justified; it’s ultimately up to law enforcement and the justice system.

To this day, Alexander maintains that firing that warning shot saved her life. The jury, perhaps because of some of the mistakes we mentioned, wasn’t convinced. Nonetheless, Alexander’s statements suggest she feels she deserves some credit for restraint — for not shooting Rico Gray. Objectively, the warning shot did end the encounter, and ending an encounter without someone being maimed or killed is certainly preferable to a  homicide. Nonetheless, for Alexander, her “restraint” meant that she faced aggravated assault charges, rather than murder charges.

The lesson for concealed carriers is that firing a warning shot in a self-defense scenario is a serious event, and unless it is determined to be justified by a law enforcement agency with jurisdiction, it is a serious crime. Do not take firing a warning shot lightly. Unless you feel that you would otherwise be justified in taking a life — that is, unless you or another is facing the imminent threat of great bodily harm or death — then you won’t be legally justified in firing your weapon as a warning. Instead you’ll be guilty of aggravated assault.

After serving her time in jail, Marissa Alexander became an advocate, speaking out about issues related to self-defense and domestic violence. When she spoke to CCW Safe about her experience, she said that in a life-threatening situation, “your options are life and death, or prison and freedom. I mean, essentially, at the end of the day, that’s what it’s going to be. You either have to choose between life or death, depending on how bad it is. If you could leave, then you have your life, and you have your freedom. If not, then you risk, ultimately in the end. . . something as tragic as death. And if you survive it, then you could be in prison.”

The most important part of Alexander’s statement is, “If you could leave, then you have your life, and you have your freedom.” Had Alexander made more of an effort to get away, rather than retrieving her gun and returning to the living area of the house, she could have avoided firing her weapon and the prosecution and prison time that followed. As a concealed carrier, if there is any way you can avoid a conflict, you should. It’s the only way to guarantee that you prevail with your life and with your freedom.