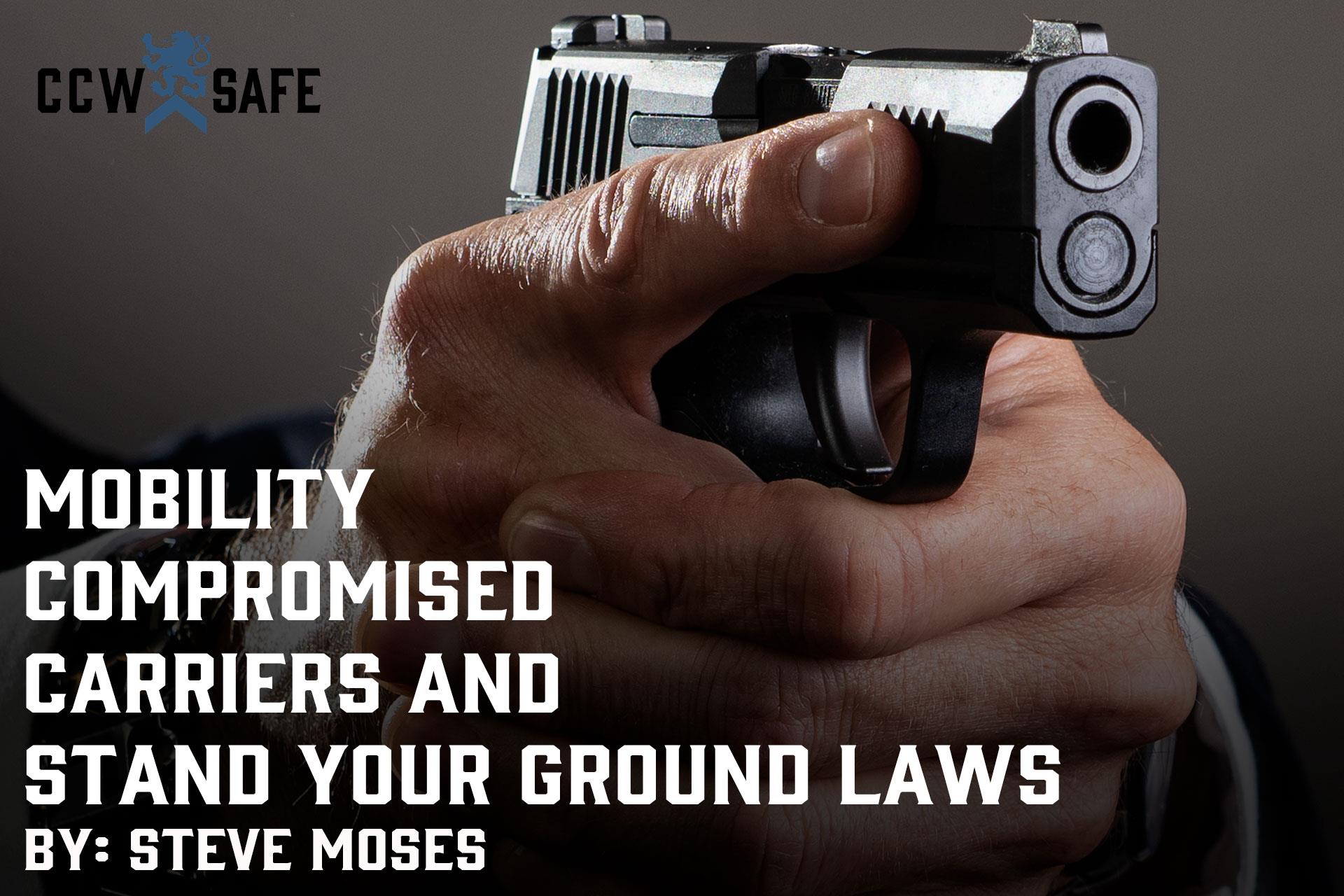 Posted on January 4, 2021 by Steven Moses in Training

In Florida, a person who is not engaged in an unlawful activity and who is attacked in any other place where he or she has a right to be has no duty to retreat and has the right to stand his or her ground and meet force with force, including deadly force if he or she reasonably believes it is necessary to do so to prevent death or great bodily harm to himself or herself or prevent the commission of a forcible felony (www.billofrightsinstitute.org). It is important to note that Stand-Your-Ground laws do not exist in all states and in the states where they do the definitions can vary.

Regardless of the existence of Stand-Your-Ground laws, I always want to avoid shooting another person if possible. Disengaging if possible might be all it takes to resolve a situation without use of a firearm, and no matter how justified a defensive shooting is, people’s lives are changed forever. The CCW Safe machine immediately went into action when a member had to shoot another in self-defense after giving ground and was charged with Murder One in a Stand-Your-Ground state, and it goes without saying that the nearly two-year period that took place from the night that the member was forced to defend himself to the moment that a jury of his peers came back with a not guilty verdict was extremely hard on both the member and his family. It is very much a possibility that had the member not disengaged at the first opportunity that the jury might have come back with a guilty verdict.

There are many concealed carriers who are concerned about the need to first attempt to disengage for the simple fact that they are physically unable to do so while on foot. Causes for these concerns might be advanced age, physical disabilities, recent surgeries that restrict movement, presence of small children, tight confines, or any combination thereof. Their concern is completely understandable. However, as John Steinbeck famously said, “The final weapon is the brain, all else is supplemental.” Cliched as this may sound, I fully agree. A good faith attempt to disengage from an altercation or threatened assault is likely going to be measured in terms of effort and intent, and not necessarily in terms of the amount of distance physically traveled.

Mobility-compromised concealed carriers should identify their strengths as well as their weaknesses. Positives might include a willingness to seek good training, participation in which often results in useful knowledge. Understanding criminal mentality (they do not think the way that we think) and motivation (why would this person be willing to harm me) allows me to identify and avoid those places in which persons that meet those descriptions are likely to be found. Learning to recognize pre-assault cues that indicate anger, looking around for potential witnesses, or an unnatural attention that is directed towards us is important. Recognizing movement on the part of others designed to close upon or intercept us for no apparent legitimate reason is another signal that persons of questionable intent send and one more reason that we might need to go straight to high alert.

And then what? I am not an attorney and nothing that I have written in this article should be considered legal advice. My personal opinion is that there is little to lose if time permits by taking a step rearwards (if in a wheelchair perhaps rolling it rearward a few feet), bringing the hands up and palms-out to a level between the belt and the neck, and asking an encroaching person to please stay back, followed by a sharp command of “stay back” or “you need to stay back” if that fails. It may be necessary to by-pass the polite request and go straight to the louder and sharper command if a suspicious person is moving in quickly at first.

If only a sharp word would always suffice in those situations where less than deadly force is warranted. Keeping a small pepper spray cannister in a location where it can be discretely palmed and made ready for quick use is a good option. I did that less than a week ago while at a restaurant when a drunken male one table away from mine started behaving oddly and began slamming three different cell phones on his table while staring at the persons seated at my table. If given the choice, I always try to hold my pepper spray in my support hand in case I need to draw my handgun with my dominant hand for the simple reason that under pressure speed counts (plus I don’t want to add another step to my draw stroke by having to first drop the pepper spray). As always, concealed carriers should remember that the actions of the other person dictate the best response at the time, which means that attempting to first deal with a fast-charging attacker by employing pepper spray should not be attempted, and that in some instances it might be necessary to actually block a punch and protect the head long enough to gain enough space to shoot from a retention position.

I can already sense some readers shaking their heads and saying that all of that is impossible for them to do. I understand. First, there is a strong possibility that you will get injured to some degree even if you do the technique correctly; however, if the response is performed timely using proper form the degree of injury is likely to be significantly less. Second, there are instructors out there who are doing a great job of teaching their students how to protect their heads from a punch or strike using a non-diagnostic method called by such names as “Default Cover”, “Three-Point Cover”, and the “Cage.” And third, many of those same instructors can teach their students how to shoot from a retention position that makes it difficult for their attackers to strip their handgun away from them.

Quickly observing and identifying potential threats, having a plan in place, verbally interacting with potential threats as soon as possible, and possessing a less lethal tool along with a firearm can go a long way towards not only preventing a deadly force event from occurring but if it does then prevailing in both the physical fight and the legal aftermath that is likely to follow. I always want to be able to say in court that I did not want to fight, that I asked the other person to stay back and they did not, that I truly believed that the other person had the intent, ability, and opportunity to seriously injure or kill me and I am able to clearly articulate those reasons why, and that I had both less lethal and lethal tools on my person but was forced by the circumstances to use deadly force because the actions of the person did not afford me the opportunity to use anything less lethal.

I can feel the toll that age and significant injuries are taking on me, and every year I feel my physical abilities decline. I also do not feel more vulnerable to being criminally assaulted now than I did ten years ago. After all, there has always been someone meaner, bigger, stronger, and perhaps even more skilled with firearms than me that could take my life. What that same someone most likely does not know is that I have a pretty good idea what their plans might be, and they have probably never considered the possibility that I might have been prepared for them.