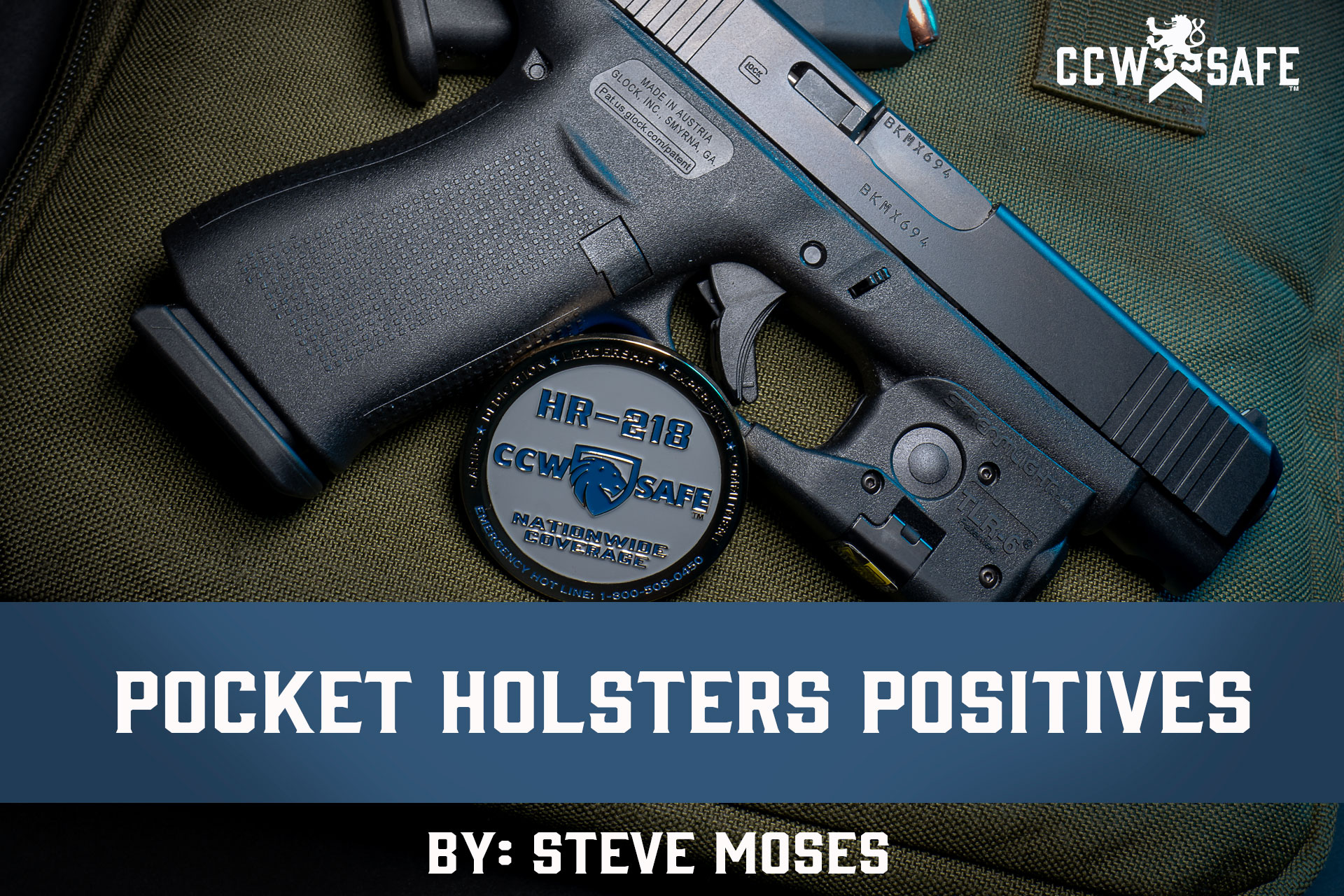 Posted on December 2, 2019 by Steven Moses in Training

A typical front pocket holster is made of leather, kydex, or nylon and is designed so that a concealed carrier can carry a small revolver or pistol in a front pocket. A properly designed pocket holster will conceal the handgun, allow it to be immediately deployed, hold the handgun in an upright position that makes it more accessible, and cover the trigger area so that the trigger can’t be pulled inadvertently while the handgun is still in the pocket. Satisfactory holsters that I have owned are the Sticky MD-4, the DeSantis Nemesis, and the Galco Pro 158B.

As usual, there is no free lunch.  Only smaller handguns can be carried in a pocket holster. Larger handguns either won’t fit completely in the pocket or are prone to excessive printing. In the event a concealed carrier is caught by surprise by a robber, armed or otherwise, it is nearly impossible to perform a quick draw in the event the attention of the criminal is momentarily diverted.  A concealed carrier seated in a vehicle will find it difficult to access the handgun without significantly altering their body position. In the event that the concealed carrier is set upon by another with a knife, screwdriver, blunt object, or even fists, an attempt to gain access to the handgun mid-struggle may mean that they suffer a damaging blow by not using both hands to protect themselves. It would appear, as my grandmother was prone to saying, that the juice was not worth the squeeze.

I have different clothes for different reasons. The weather may be hot or cold, or dry or wet. The occasion may be casual or formal. I have different handguns for much of the same reason. And when it’s the proper time to carry a small handgun, I have different holsters, too. My first choice for a holster will always be one that I can carry on my centerline and one I can carry on my right hip. These holsters will be robust, comfortable, and equipped with stout loops that I can run my EDC Foundation belt or a leather dress belt through in order to firmly affix that holster to my body. However, there are occasions where using one of these two holsters are less than ideal, and that is when I find that a quality pocket holster fits the bill just fine.

Are there children or others in the house that should be kept away from firearms? I make sure all of my firearms are locked up and carry my Smith & Wesson 442 .38 Special revolver in a pocket holster that goes into the front pocket of my shorts or pants. Is it time to mow yard, sit on the front porch, or do other errands outside in the yard? Again, the 442 goes into a pocket holster. If I need to go to the doctor’s office, hospital, or other place that I can’t carry, I put the revolver in the pocket holster and insert into my waistband in the same place that I normally carry an appendix holster. Upon arrival, I leave the handgun in the holster and remove both and then store under my seat in a locked handgun lockbox that is secured by a cable to the bottom of the driver’s front seat. Upon my return to my vehicle, I place the holstered revolver in my waistband while standing next to my vehicle, then climb inside and drive off.

If I have concerns about doing that because I don’t want to be seen doing that or the area simply does not seem safe, I will get in my car, immediately lock the doors, then drive off to another area where I can stop, get out, and return the holster handgun to my waistline. I am not a fan of holstering from appendix position when seated, most especially when using a holster that is not designed for inside-the-waistband carry.  Of course, carrying on the hip instead of the appendix position is just as doable. I would caution concealed carriers to avoid carrying a handgun in this manner as their primary method of carry. Since the holster is not firmly anchored, it probably won’t maintain the same cant angle and height above and below the waistline. This may affect occasional presentations from the holster, and in the event that the concealed carrier ends up grappling with an attacker the odds of losing control of the handgun increase.

We do not get a lot of really cold days in East Texas, but they are not unheard of. It is difficult to access a concealed handgun under a zipped parka. However, it is not that difficult to access a small handgun carried in a pocket holster in the pocket of a parka or jacket. I was recently contacted by a reader who asked for assistance in using a handgun carried in what he referred to as a “man purse”. He had significant back issues that made belt carry untenable, and his biggest concern was stopping at gas stations while traveling in his motor home.

My suggestion: carry a small handgun in a pocket holster and keep your dominant hand in the same pocket while using the gas pump. Hardwired Tactical instructor Darryl Bolke is an advocate of pocket carry for specific situations, and as I understand it did a demonstration at the recent HITS Pat Rogers Memorial Revolver Round Up in front of multiple students whereby he started in from a relaxed position with his hands in his pockets while another instructor stood by with a timer. On the signal he drew a small revolver from a pocket holster and parked a single round in the head of a target three yards away (typical armed robbery distance) in less than 3/4ths of a second!

Important: concealed carriers who decide to add occasional pocket carry to their repertoire should never return the handgun to the holster while it is still on their person. There is simply too much that can go wrong that can contribute to a negligent discharge. This is especially true for the majority of pocket holsters that tend to collapse when empty. The concealed carrier should remove the holster, place the handgun in it, and then carefully return both to their original location.

As I stated earlier, there are definitely pros and cons when it comes to pocket carry. For me, the pocket holster fits that niche where carrying of a larger (and likely more effective) handgun is difficult as well as when the temperatures are dropping, and cold-weather garments are a must.   As always, concealed carrier should pick and choose handguns and support gear that works best for them.