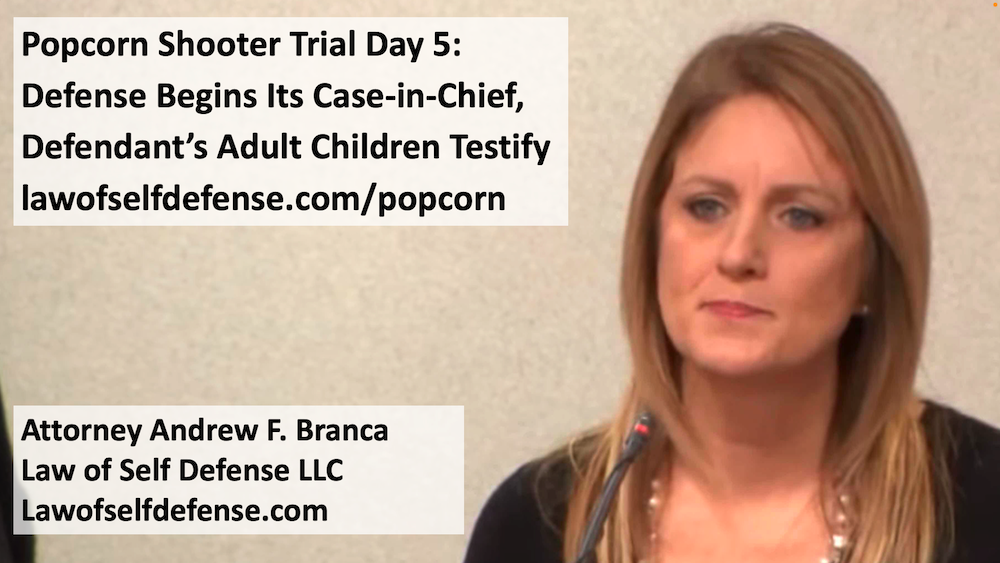 Posted on February 21, 2022 by Andrew Branca in Uncategorized

Yesterday was the fifth day of testimony in the murder trial of Curtis Reeves, the retired Tampa SWAT Captain who shot and killed Chad Oulson in a local movie theater in January 2014 after the two men had a verbal altercation that became physical.

This was the day the defense began to present its case-in-chief, and calling its first witnesses.  Perhaps ironically, the first two defense witnesses were actually police officers involved in the investigation, and the third was the man who had installed the theater security camera system and collected the hard drives that captured video of the shooting.

The day closed out with testimony from the defendant’s two adult children.  The first of these was the defendant’s daughter, who testified largely about her father’s increasingly frail condition as he aged.  The second was the son, himself a police officer, who actually arrived at the scene of the shooting just as the fatal shot was fired, and who attempted to provide emergency care to the fatally shot Chad Oulson.

It’s worth noting that there exists a general rule that leading questions are not permitted on direct questioning of a witness called by a party, but only on cross-examination of that witness by the other party.

Yesterday the defense took full advantage of this opportunity with both of the detectives they called as witnesses.

Unfortunately for the State, Detective Smith’s direct testimony as a witness called by the defense went little better than had Detective Proctor’s cross-examination testimony the day before.

Over the course of nearly two hours of direct questioning by defense counsel Richard Escobar he obliged Smith to concede again and again and again that his conduct in the investigation of this event was little more than an abject failure.

This was particularly true in the context of Smith’s collection of the hard drives containing the video of this event.  Rather than securing these drives on the scene immediately following the shooting, which he could have done, Smith delayed securing them until they had already been shipped by the theater to its corporate headquarters in Alabama.

When Smith finally did secure a sealed box provided by corporate and purporting to contain the relevant drives, he didn’t bother to open the container and inspect its contents prior to storing the container in evidence.

When the container was ultimately unsealed and opened, it was found to contain 10 hard drives.  Unfortunately for Smith, testimony later in the day from John P. Silis, the video system installer who had collected the drives for corporate, revealed that in fact he had collected and sent 15 hard drives.  Five drives, then, had not ever been secured by Detective Smith.

Arguably the strongest indication that Smith’s testimony on direct questioning by the defense was enormously damaging to the State’s narrative of guilt is that the State declined to bother to cross-examine Smith at all.

The next defense witness was also a detective involved in the investigation, this time one from the cybercrimes division.  The primary focus of the defense in calling Detective Brossone was with respect to his role in securing Chad Oulson’s cell phone.

You’ll recall that the State has made much of the fact that Curtis Reeves’ DNA was not detected on the phone.  The absence of DNA is not proof of much, as DNA is often not left behind in detectable quantities, but had Reeves’ DNA been found on the phone, this would have corroborated Reeves’ claim of having been struck by Oulson’s phone as the initial physical aggression in their confrontation.

The defense thus drew from Detective Brossone’s testimony as to the various ways the collection of the cell phone was not done in a manner optimal for ensuring the preservation of uncontaminated DNA on its surface.

As was the case with Detective Smith, the State did not bother to cross-examine Detective Brossone at all.

Next up as defense witness was John P. Sllis, the man who had installed the theater’s security cameras, and who was called by the theater to collect the system’s hard drives and ship them off to corporate in Alabama.

The State did finally engage in cross-examination with this witness, for a mere three minutes or so.

The fourth witness of the day was Jennifer Shaw, the adult daughter of defendant Curtis Reeves. Her testimony on direct was focused on her father’s increasingly frail and weakened condition as he aged.

A key facet of the defense, of course, is that Reeves’ age of 71 years at the time of the shooting and related infirmity made him exceptionally vulnerable to grave bodily injury when attacked by the 6’ 4”, 220 pound, 43-year-old Chad Oulson.   Shaw’s testimony was patently intended to buttress that argument.  At least at one point of her testimony about her aging father, an emotional Shaw was visibly on the verge of tears.

Cross-examination of Shaw by ADA Scott Rosenwasser came across to my eye as rather petty and mocking, which was a rather ugly look. (You may recall Rosenwasser from the trial of Michael Drejka, the “handicap parking spot” shooter.)

Certainly the State does not want the defense to convince the jury that an acquittal is mandatory because of Reeves’ purported age and infirmity—age and infirmity by themselves are not a license to kill, after all—but this cross could have been managed in a more effective manner than that chosen by Rosenwasser.

The final witness of the day was Matt Reeves, the adult son of Curtis Reeves who is himself a Tampa police officer.  Ironically, Matt had arranged to meet with his parents at the theater to join them in watching the film “Lone Survivor,” and arrived moments before the fatal shot was fired.  It seems likely that if Matt had arrived only minutes earlier, the confrontation between Curtis Reeves and Chad Oulson would have gone quite differently, and without fatal outcome, if it had occurred at all.

Matt actually helped lay the fatally wounded Oulson on the floor of the theater and initiated first aid to Oulson, before a nurse Derek Friedhoff took over.  Because he was on scene for the shooting, Matt had some modest contribution to make as an eye witness of the scene and event, including testifying to the theater as being “pitch black” and “very loud,” evidence favorable to the defense.

Matt also provided testimony as to the increasing frailty of his aging father, along much the same lines as had Curtis Reeves’ daughter Jennifer Shaw.

Cross-examination of Matt was conducted by lead ADA Glenn Martin.  As had Rosenwasser, Martin’s cross was done in a rather petty and mocking way, which struck me as less than optimally effective.

Indeed, with respect to the cross-examination of both daughter and son, the State’s position seemed to be that the 71-year-old Reeves was as healthy and robust as he might have been decades earlier—a ridiculous proposition to anyone who simply observes Reeves in the courtroom.

At day’s end, it appeared to my eye that Matt Reeves was finished as a witness following his re-direct by the defense, but news reports are indicating that he may actually return as a witness on Monday morning—presumably to be subject to re-cross by the State, perhaps preceded by more re-direct by the defense.   The defense re-direct certainly had been interrupted by several lengthy sidebar discussions with Judge Barthle upon repeated objections by the State, so perhaps there is further work to be done with this witness.

That’s it on the Reeves trial for the weekend folks.  On Monday morning I expect to once again be live streaming the proceedings with commentary and analysis over at the Rekieta Law YouTube channel, and I’ll share a link that morning for those of you wishing to join in the fun.

Attorney Andrew F. Branca is in his third decade of practicing law, specializing in self-defense law of the United States, where he is an internationally recognized expert.  Andrew has contributed in this context by the Wall Street Journal, National Review, the Chicago Tribune, the Washington Post, and many others, including nationally syndicated broadcast media.  Andrew is also a host on the Outdoor Channel’s TV show The Best Defense and contributor to the National Review Online.

Andrew is a former Guest Instructor and subject matter expert (SME) on self-defense law at the Federal Bureau of Investigation’s National Academy at Quantico and the Sig Sauer Academy, an NRA Life-Benefactor member, an NRA Certified Instructor, an IDPA Charter/Life member (IDPA #13), and a Master-class competitor in multiple IDPA divisions.  Andrew teaches lawyers how to argue self-defense cases as a certified instructor with the Continuing Legal Education (CLE) system in numerous states around the country.

In addition to being a lawyer, Andrew is also a competitive handgun shooter, an IDPA Charter/Life member (IDPA #13), and a Master-class competitor in multiple IDPA divisions.