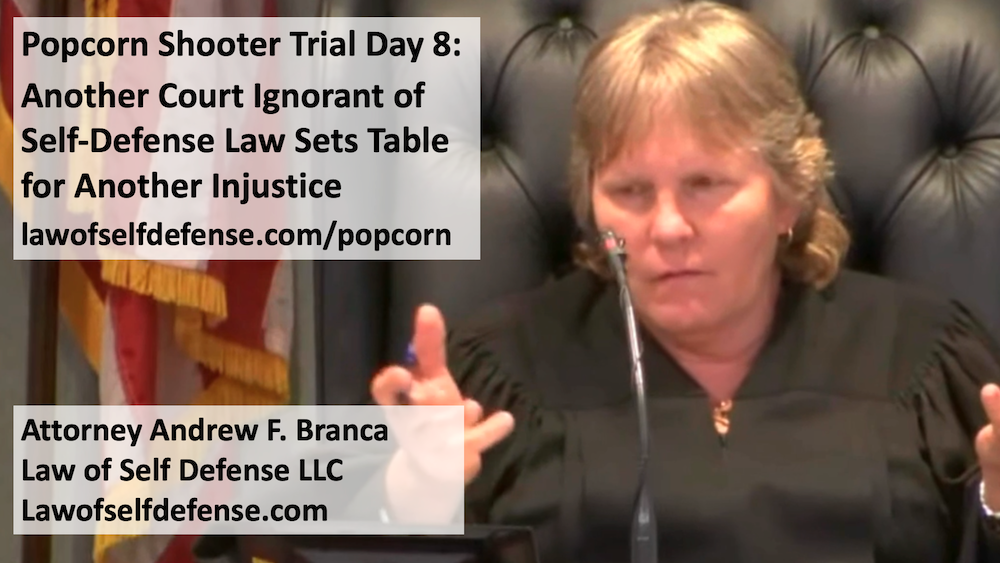 Posted on February 24, 2022 by Andrew Branca in Uncategorized

Yesterday was the eighth day of testimony in the murder trial of Curtis Reeves, the retired Tampa SWAT Captain who shot and killed Chad Oulson in a local movie theater in January 2014 after the two men had a verbal altercation that became physical.

The reason there were only three was largely because of the extensive arguments made outside the hearing of the jury prior to the testimony of the latter two experts.  Unfortunately, much of the argument preceding Dr. Bedard’s testimony revealed a substantive ignorance of fundamental aspects of self-defense law on the part of the court, the same type of ignorance we’ve seen lead to injustice in verdicts in other recent high-profile cases. We’ll focus our commentary and analysis here on that apparent ignorance.

The testimony of Dr. Michael Foley was almost certainly of the highest quality in terms of substance, but unfortunately was catastrophically bad in terms of presentation.  That’s because this testimony was delivered to the jury in the form of a previously recorded video, shown on a large screen television in the courtroom yesterday.

Further, the testimony consisted largely of lengthy ongoing narrative descriptions of radiological images of Curtis Reeves’ skeletal structure and joints.  The result was a very difficult to understand audio and a very difficult to observe video (especially as seen over the live stream by folks like me not in the courtroom).

Because of the video presentation of this testimony there was no real substantive direct and cross examination worth commenting on.

The testimony of the next expert witness, Dr. Micheal Knox, was preceded by nearly an hour of argument between the parties, outside the hearing of the jury, about the extent to which Knox should be permitted to make use of photos of mannequins in the theater to illustrate the concept of backlighting.

Here Prosecutor Rosenwassen argued that because the photos with the mannequins could not perfectly replicate the circumstances of the event, could not perfectly reflect what defendant Reeves had actually observed, they were misleading, prejudicial and not probative, and therefore the photos using those mannequins should not be admissible as the demonstrative exhibits offered by the defense.

Defense Counsel Richard Escobar responded by noting that a demonstrative exhibit was by its very nature never an exact replicate of the real thing, that the photos were not being offered as evidence of exactly what Reeves had seen but only to illustrate the concept of backlighting, and therefore were important demonstrative exhibits that would inform the jury.

All of this took a full 50 minutes of argument—and ultimately the relevant photos would actually be put in view of the jury for a totality of much less than 5 minutes, at the very close of Knox’s direct testimony, conducted by Defense Counsel Escobar—and much of even that brief exposure was directly the result of the images being kept in the jury’s view as the State demanded yet another sidebar with Judge Barthle.

The brief showing of the mannequin photos was, however, preceded by nearly two hours of direct questioning of Knox on the subject of the incompetence of the criminal investigation into this shooting.  So, really, Knox’s testimony was perhaps 95% crime scene investigation critique, and perhaps as much as 5% display of photos the parties spent an hour arguing about.

Thankfully, Prosecutor Rosenwassen’s cross-examination of Knox was only about 5 minutes in duration. Not surprisingly, given that even the State has conceded that the investigation was a train wreck, and he certainly did not want to focus on the mannequin photos against which he had so forcefully argued.

The final witness of the day was Dr. Roy Bedard, the defense use-of-force expert.  And as occurred with Knox, once again the parties spent about an hour outside the hearing of the jury arguing about the scope of testimony to be allowed by Dr. Bedard.

Sadly, it was this argument that revealed that once again we have a criminal court apparently ignorant of substantive use-of-force law, in a self-defense case.  Indeed, so confused was the argument by the State, defense, and Judge Barthle, that it’s difficult to intelligently summarize here—but I’ll make my best effort.

First, however, we may as well make sure that all of us here properly understand the legal concepts that were mangled yesterday in this court room argument preceding Dr. Bedard’s testimony.

Two of the elements of any claim of self-defense are Proportionality and Reasonableness.

As you can see, there are various levels of force defined as being reasonable under different conditions of stress.  This use-of-force continuum concept is commonly used in training police and security officers, and also not infrequently for civilians—although the application for civilians is arguably less appropriate.

The reason the use-of-force continuum may be less appropriate for civilians is that police and security are often operating under a base set of assumptions that don’t apply in the civilian context.  For example, police and security are often permitted to be the initial physical aggressors in a confrontation, and the use-of-force continuum assumes this to be the case.  In contrast, civilians are never permitted to be the initial physical aggressor.  Similarly, police and security generally don’t have a duty to retreat if the circumstances otherwise justify their use of force, but civilians very well may have such a duty.

Also, with respect to the facts of this case in particular, Reeves obviously used deadly defensive force, so arguably many of the lower stages of the use-of-force continuum are irrelevant.

In the argument preceding Bedard’s testimony Prosecutor Glenn Martin argued that the use-of-force continuum should not be admissible, because it was inapplicable to the civilian context, and Reeves was a civilian when he shot Oulson.  Martin was particularly vehement that Bedard not be permitted to argue that if “X” force was threatened by Oulson, then “Y” defensive force was justified by Reeves.  Only the jury can make the call on what is reasonable, argued Martin.

Further, Prosecutor Rosenwassen argued that there was not even evidence in the record that Reeves had ever been taught this concept of a use-of-force continuum, given how long ago his police career had occurred.

In counter-argument, Defense Counsel Dino Michaels argued that Reeves had been a police officer for some 27 years, that the use-of-force continuum was commonly taught to police, and that Bedard ought to be able to at least draw his own illustration of this concept for the jury.

What we cannot discard is the applicable Florida law that applies in this case, particularly the “two buckets of force” framework reflected in that law.  Indeed, the prosecution’s argument illustrates a profound misunderstanding of what aspects of reasonableness fall within the province of the jury, and what aspects are simply matters of law and therefore outside the province of the jury.

Florida law specifically provides that deadly defensive force is reasonable and permissible and legally justified if it is being used to stop a deadly force threat or a forcible felony. Period.  If those facts exist, the legal outcome is a matter of law, not a matter of jury discretion.

But once the jury has decided that it believes that Reeves was reasonable in perceiving an imminent deadly force threat, the result of that conclusion—that his use of deadly defensive force was justified—is outside the discretion of the jury, but rather is simply a function of law.

That being the case, if Bedard was going to be prohibited from covering the multi-level use-of-force continuum, he certainly must be permitted to cover Florida’s “two buckets of force” framework reflected in Florida statute, and noting that the use of deadly defensive force against a deadly force threat is reasonable purely as a matter of law—just as Judge Barthle would be instructing the jury prior to deliberations.

Again, whether Reeves reasonably perceived that he was facing a deadly force threat is up to the jury. If they decided he was, however, then Reeves’ use of deadly defensive force was reasonable as a matter of law.  And Bedard ought to be able to testify to that before the jury.

Instead of a conclusion reflecting that proper understanding of Florida use-of-force law, we got from Judge Barthle a request to the parties to come to some kind of compromise on this matter of law.

The correct answer is to look to the actual law. And that’s the job of the judge.  And the judge here is Judge Barthle.

Separately from all that nonsense, Bedard presented competent testimony on a variety of use-of-force issues, well worth watching if somewhat longer than necessary, followed by a relatively brief cross-examination by the State.

That’s it on the Reeves trial for the moment, folks.

Also, I’ll once again be doing live stream analysis and commentary over at Rekieta Law’s YouTube channel.  You’ll be able to find today’s live show for the ninth day of this trial at:

Attorney Andrew F. Branca is in his third decade of practicing law, specializing in self-defense law of the United States, where he is an internationally recognized expert.  Andrew has contributed in this context by the Wall Street Journal, National Review, the Chicago Tribune, the Washington Post, and many others, including nationally syndicated broadcast media.  Andrew is also a host on the Outdoor Channel’s TV show The Best Defense and contributor to the National Review Online.

Andrew is a former Guest Instructor and subject matter expert (SME) on self-defense law at the Federal Bureau of Investigation’s National Academy at Quantico and the Sig Sauer Academy, an NRA Life-Benefactor member, an NRA Certified Instructor, an IDPA Charter/Life member (IDPA #13), and a Master-class competitor in multiple IDPA divisions.  Andrew teaches lawyers how to argue self-defense cases as a certified instructor with the Continuing Legal Education (CLE) system in numerous states around the country.

In addition to being a lawyer, Andrew is also a competitive handgun shooter, an IDPA Charter/Life member (IDPA #13), and a Master-class competitor in multiple IDPA divisions.