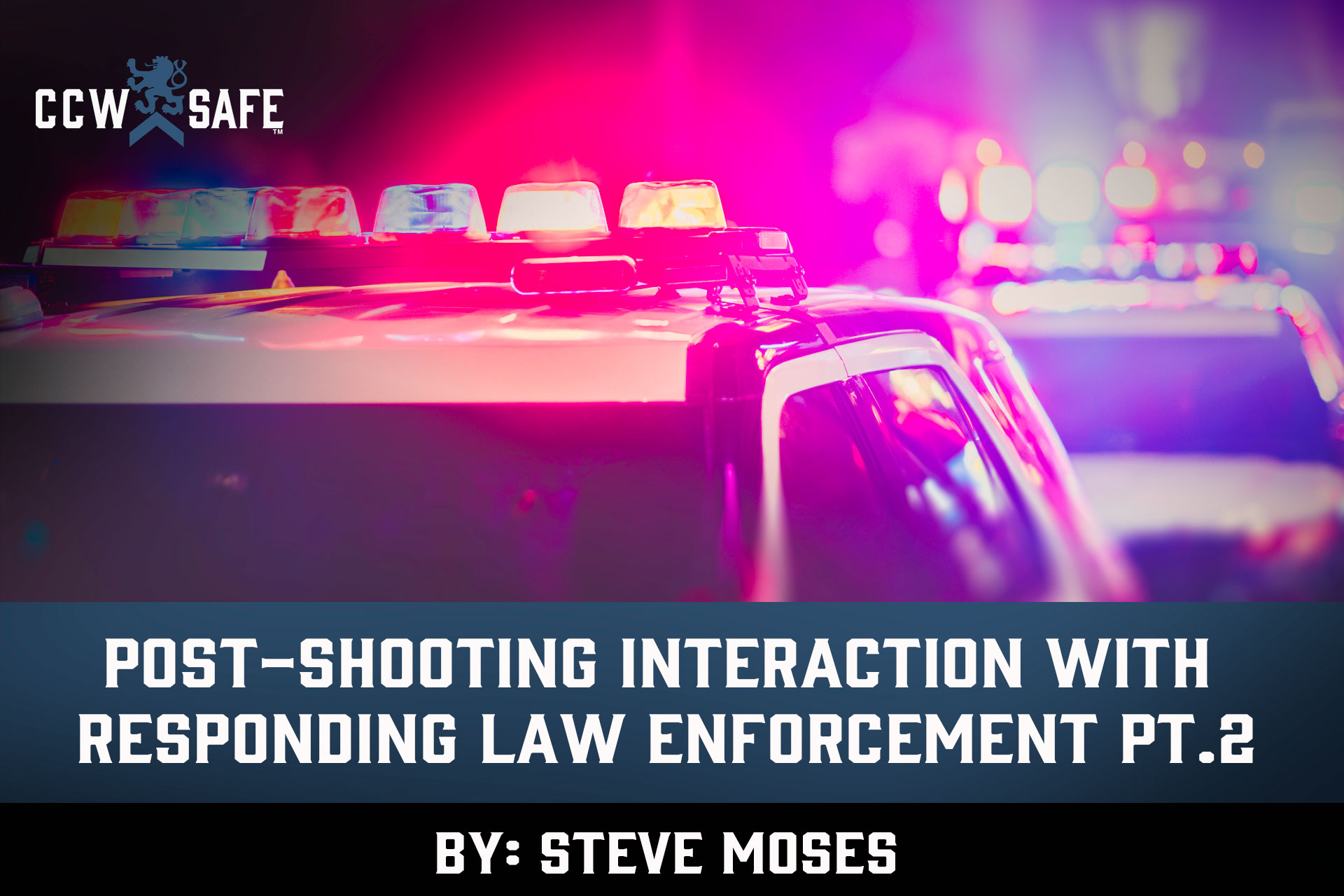 Posted on November 11, 2019 by Steven Moses in Training

In Part One of this article, I discussed the fact that concealed carriers should consider themselves to be in danger perhaps two additional times after having had to use a handgun in self-defense. First was with the criminal actor, second might be with armed concealed carriers who might rush to judgement and think the that the concealed carrier is the bad guy, and third is with responding law enforcement.

Readers should take note that the recommendations made in this article are based in part upon the totality of the circumstances of the situation and do not take into consideration the wide variety of variables. These might include location (convenience store, parking lot, gas station, home, etc.) and other people in the immediate vicinity (friendly, possible accomplices, hostile crowd). Having said that, set out below are some considerations:

The concealed carrier should move into a safer position that allows them to observe the criminal, reduce the chance that they might be flanked by a criminal accomplice, and that allows him or her to watch for other threats, concealed carriers, persons willing to assist, and responding law enforcement. This might include backing up to a wall in a structure or taking a position so that the concealed carrier can both keep an eye on the downed threat (if applicable) and spot incoming police or others from a safe distance.

The concealed carrier should secure the handgun as soon as possible. A proper holster will allow this to be done safely with one hand, but if not the handgun can be laid on the ground and then stood on. It is in the best interest of the concealed carrier if he or she is not holding the handgun when police arrive. My preference would be to holster the gun and keep it under concealment. If necessary I can maintain my grip in case I need to draw it quickly should a resumption of the attack appear imminent.

The concealed carrier should immediately call 911 if possible or ask others to do so.  This is important.  Good guys call 911, bad guys don’t. Request assistance for any victims, yourself, and even the attacker. Information should probably be limited to the fact that you were attacked, shots were fired, the attacker is down (or ran off), whether medical assistance is required, and a brief description of your physical appearance. Critical information such as location, type and color of your car if relevant, your location in a building, etc., should be provided, but not a detailed explanation of what happened. My personal opinion is that if asked, I will tell 911 that I was the victim and that I shot at the attacker in self-defense. I think that it is very important that responding law enforcement has a general understanding of what took place prior to arrival, but no more than that until the scene is safely secured and I have CCW Safe involved and met with my attorney.

Body language is important. If an off-duty officer was involved in a shooting, he or she would probably hold their badge and ID up in the air for responding officers to see. Since this is typically not an option for concealed carriers, one possibility is to keep your phone up to your ear and start waving in the air with the other arm in order to catch the attention of the officers and direct them to your location.

Move slowly and deliberately. Comply with all orders issued by responding officers.  If in doubt, ask them what you want to do. This is especially important if the concealed carrier has laid the handgun on the ground and is standing on it. I would let the officers know that I have in my possession a holstered handgun and would like to know what they want me to do.  I am going to keep my hands away from the location of my handgun and refrain from touching it if they ask me where it is.

Stay calm, refrain from explaining what happened in detail other than you were attacked and in fear for your life, identify any witnesses who may have been present, and if you know where the attacker may have dropped or tossed a weapon, point it out. Call the CCW Safe Hotline as soon as possible, and then turn it over to the professionals. It would be pretentious of me to pretend that I know what a concealed carrier might be going through at this moment and provide further advice. The purpose of this article was to shed light on some actions that a concealed carrier might take in order to lessen the chances that they might get shot by mistake after being forced to defend themselves from a violent criminal actor.

Now is the time to visualize interacting with law enforcement after a possible use of a defensive firearm.  What do you think it might look like, and what would you say? I am a firm believer that having a plan in place is never a bad thing. More than likely if it a concealed carrier finds him or herself in this situation, it will not play out exactly like we thought. However, it is easier to modify an existing plan than come up with a new one during what may be the most challenging event that we ever have to deal with in our life.