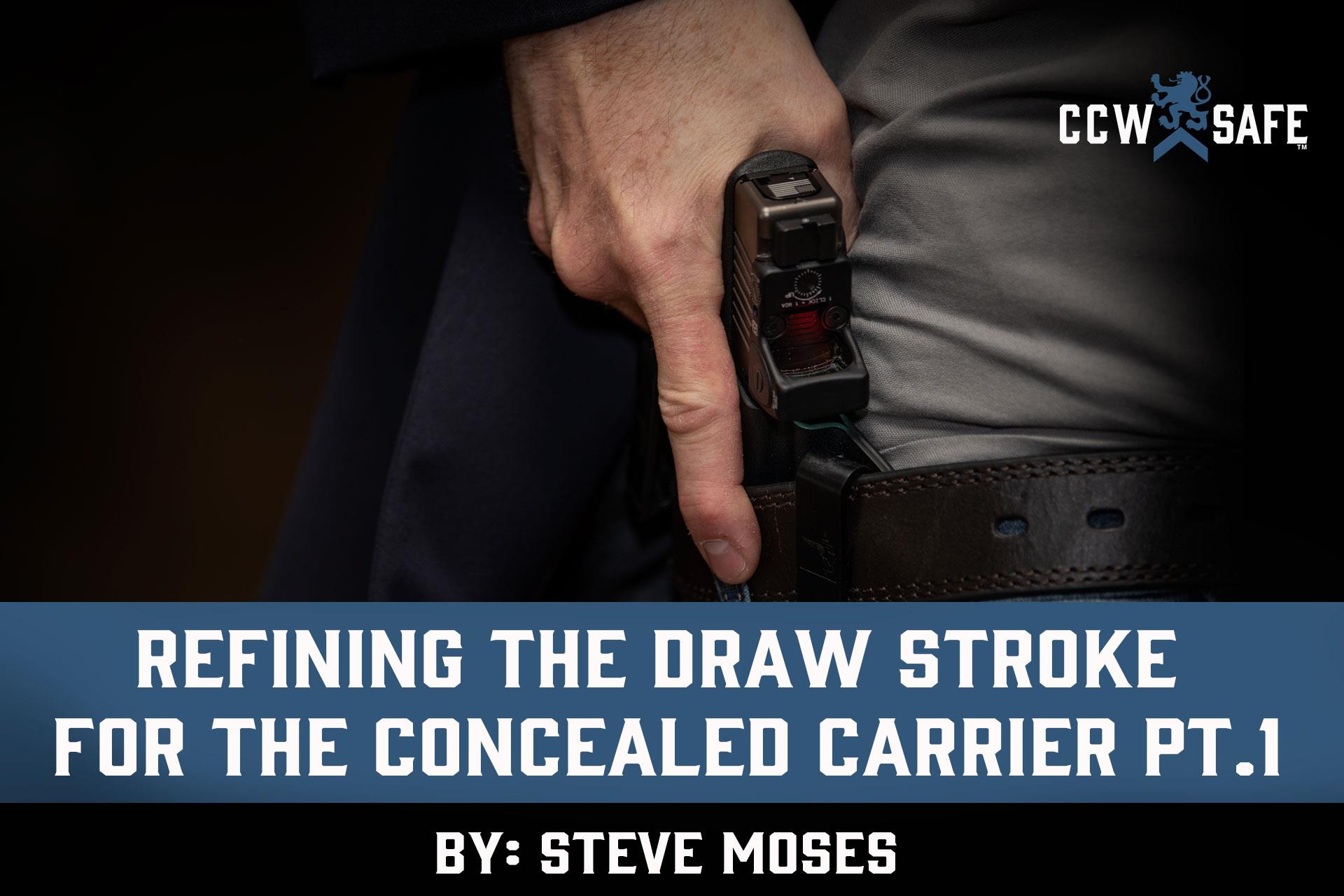 REFINING THE DRAW STROKE FOR THE CONCEALED CARRIER PT.1

REFINING THE DRAW STROKE FOR THE CONCEALED CARRIER PT.1

A concealed carry weapon is a handgun that is typically carried in a holster under an open or closed cover garment, where it should remain until such time its owner has need for it. Many concealed carriers do not fully take into consideration the fact that they almost never control the pace at which a violent attack takes place. The concealed handgun should remain concealed until such time that the concealed carrier legitimately believes that his or her life or health (or in some instances that of a third party) is in jeopardy. Readers familiar with some of my past articles may recall that I consider the litmus test for determining whether my life and health are in jeopardy is a sincere belief that the other or others have the ability, opportunity, and intent to severely injure or kill me and my only option is to defend myself.

It stands to reason that I should not draw my concealed handgun unless another person has given me reason to do so because of their actions. This presents a challenge. What if the other person suddenly and unexpectedly draws a concealed handgun? What if a group of young men whose demeanor suggests that they are looking for trouble suddenly starts closing on me, and in spite of my command to stay back they simply charge me? I could go on and on, but hopefully the message is clear: concealed carriers should be able to quickly access their handgun and get the muzzle between them and the perceived deadly threat quickly enough to put it to good use if the circumstances call for it.

I have been a defensive firearms instructor for 26 years, shoot competitively with other shooters, and am the match director for a local action pistol shooting match. The reason that I am mentioning this is that I have observed hundreds, if not thousands, of persons in the act of shooting handguns after drawing them from their holster.  It takes three to five seconds for a large percentage of them to get their handguns out of the holster and in position to fire their first shot.  Veteran instructor Tom Givens has done extensive research on civil sector gunfights and found that many such events are over in three seconds!

The secret to a quick draw is part equipment and part technique. Let’s start with equipment. There is a world of difference between a properly designed concealment holster and one that is not, and shooters who believe that any holster that halfway fits their pistol will do at some point may realize that if they end up in the fight of their life, the last thing they need is to be simultaneously fighting with their holster in order to get their handgun into play.

Concealed carriers who agree with me that that the ability to quickly draw a concealed handgun from the holster on demand is a good thing will benefit from owning a well-made kydex or high-end leather holster that is designed so as to provide good retention, acceptable concealment under a cover garment, and assist in establishing a good grip (proper height on belt, angle, and sufficient distance between the handgun frontstrap and the belt). In addition, a good belt that is capable of supporting the holstered firearm is a must. My business partner and I typically keep several belts in reserve during our Defensive Pistol classes as it is not uncommon for students to disregard our recommended equipment list and show up with belts that are extremely flimsy.  In anticipation of being asked this question later, I wear an EDC Foundation Belt and mostly use JM Kydex and Keepers Concealment holsters.

Proper gear is only part of the solution. Good technique is equally, if not more, as important.  The challenge that lies in good technique is that it is not available for purchase through Amazon Prime. I have watched a few shooters develop into great shooters without taking instruction, but they are the minority. I don’t think I would have ever figured all of this out by myself without assistance from others (perhaps I am a slow learner).

Good technique is that which places a premium on economy of both motion and effort. What I need to do is eliminate unnecessary movements and take shortcuts that get me to my ultimate objective sooner, which is to align the muzzle of my handgun with my target fully prepared to press the trigger and achieving an acceptable level of accuracy. Part Two of this article will talk about how that might be achieved based largely upon a 45-minute telephone conversation that I recently had with Spencer Keepers, one of the best handgun shooters I know and holder of a Gabe White Turbo Pin and Todd Lewis Green FAST coin.

Spencer has spent way more time than me studying the smallest nuances of achieving a fast draw and is capable of drawing a handgun from concealment and getting a first round hit under 1 second, including reaction time to a start signal. I would be first to say that being able to shoot that fast would be nice, but I for one do not believe that it is necessary to do that in order to survive an armed encounter with a violent criminal. However, taking some time in order to understand the mechanics of the fast draw can go a long ways for concealed carriers whose goal is to simply be fast enough on the day that violence shows up unannounced.