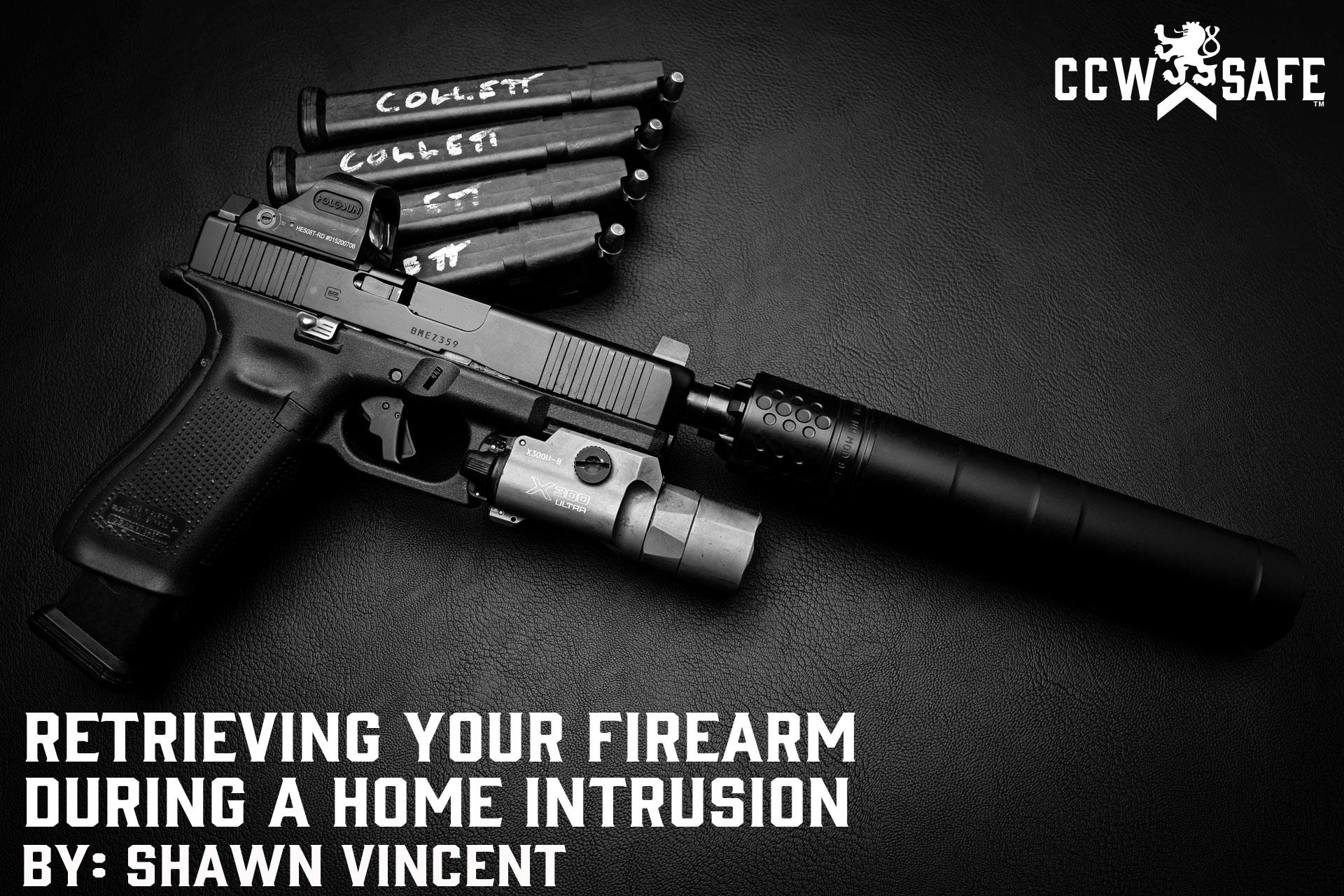 Posted on April 8, 2022 by Shawn Vincent in In Self Defense

Retrieving Your Firearm During a Home Intrusion

Firearms instructor Claude Werner credits his friend and colleague John Hearne with the term “ninjas coming from the ceiling” to describe what some clients envision a potential home invasion will look like – men clad in black, shattering windows, splintering doors, and repelling down walls. The truth is much less “lurid,” Claude says. While Claude has found examples of coordinated armed home invasions, he notes that such extraordinary events are exceedingly rare. Most intrusions are one or two people, and the intruders often take their time scoping out a property “in a shark-like fashion” before breaking in.

Years ago, Claude conducted a statistical survey, assessing five years’ worth of self-defense cases that were reported in the NRA’s “Armed Citizen” column. He found that in the vast majority of the reported cases, the defender had time to retrieve a secured weapon before encountering the intruder. Claude says, “If somebody starts rattling your front doorknob, or you hear noise in your basement, that tends to be an alert for people who are armed to go and get their gun.”

Firearms instructor Steve Moses, who once encountered an intruder in his home, chooses to keep a small handgun on his person most of the time, but Steve is a seasoned professional, and he acknowledges that such vigilance isn’t necessary for many home defenders. Steve does stress, however, that although most intrusions don’t occur within what Claude calls “reaction time,” armed defenders need to be able to get to their firearm quickly and have it ready to deploy in a matter of just a few seconds.

For Claude, this means “I don’t want to have the gun in one place, the magazine in another, and the ammunition in a third in the classic way that people are often taught … that you have to keep your pistol and ammunition separate.” Claude stresses that home defenders shouldn’t be fumbling with ammo during a home intrusion. “Once you decide to get the pistol out,” he says, “you need to be able to pick the pistol up and get it into action and ready to use very, very quickly.” That said, Claude also emphasizes the need to have your weapon stored securely. Steve Moses says, “There are gun vaults in which you can have a handgun mounted on a nightstand or in a locked gun box, and you can either enter a very quick combination or even place your hand over it to register your fingerprint to gain quick access to your handgun.”

Once an armed home defender decides how to make a firearm secure and easily accessible, the question of which room in the home to secure the weapon becomes very important. The defender will have to decide whether to make their stand in the room where they store their weapon or to move to another position in the home. Both Claude and Steve agree that it is often best to meet the intruder in the room where you keep your weapon. Steve recommends taking a “hard corner” along the same wall as the door to gain a tactical advantage should the intruder enter the room. If there are other loved ones in the home, the defenders will want to position themselves between the intruder and the people they are protecting, and Steve says it’s a good idea to move everyone else to a single, locked room. Claude says this tactic requires the defender to know how to move effectively and safely through the home while carrying a firearm – a skill he feels isn’t stressed enough in traditional self-defense training.

For those who do feel comfortable moving safely through their home with a firearm, both Claude and Steve discourage defenders from initiating contact with an intruder. We’ve documented several cases (Ted Wafer, Greggory Farr, and Charles Dorsey to name a few) where armed defenders met intruders at the front door with tragic personal and sometimes legal consequences. Instead, a defender should find a defensible place between the intruder and others in the house, secure a hard corner, and allow the intruder to come to them. Tactically, this gives defenders the advantage, and it gives them more time to assess the true nature of the threat. Don West, criminal defense attorney and National Trial Counsel for CCW Safe, says that by waiting for an intruder to make contact before engaging, a defender reduces the legal risk associated with a self-defense shooting if deadly force is ultimately required.

Claude’s statistical survey covered self-defense events that happened over 20 years ago. In the subsequent two decades, there’s been a huge proliferation of relatively inexpensive home security devices such as wifi cameras and motion detectors. Claude says this technology gives you as a home defender more “knowledge about what’s going on outside of your home” and “that increases the amount of time that we have to make our preparations.” The more prepared a home defender is, the better the odds that they will have what Claude calls a “positive outcome.”

The lesson for armed home defenders is that in the vast majority of real-world home intrusion scenarios, defenders who keep their firearms secured yet quickly accessible almost always have plenty of time to retrieve their firearms and make them ready before engaging in a confrontation with an intruder. Installing and maintaining simple digital wifi security devices can increase the time a defender has to retrieve their weapon and take a defensive position, and the best place to take a defensive position is in a “hard corner” between the intruder and any other person in your home that you need to protect. If that hard corner is not in the room where you keep your firearm, you’ll want to practice moving effectively and safely between the two positions with a loaded gun.