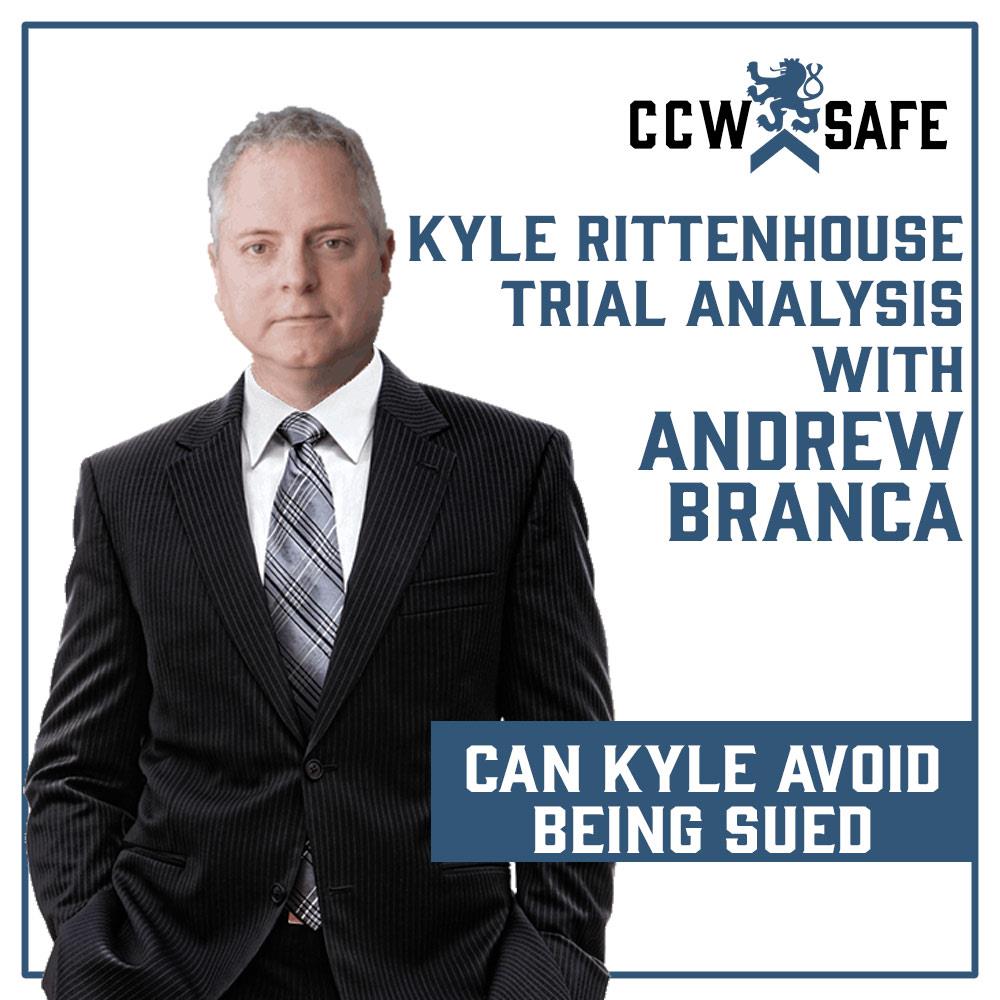 Posted on November 23, 2021 by Andrew Branca in Uncategorized

Kyle Rittenhouse has been acquitted of all the criminal charges against him, the only possible verdict consistent with justice in a case with this evidence and law. Having been acquitted in criminal court, he is now free of any possible criminal liability for his actions in lawfully defending himself on August 25, 2020.

Now, however, there remains the possibility that he might be sued in a civil suit, either by survivor Gaige Grosskreutz for the vaporization of his bicep when Kyle shot him in self-defense, or by the families of Joseph Rosenbaum or Anthony Huber in wrongful death actions for Kyle’s killing of those two men, again in self-defense.

In particular, I’m getting a lot of inquiries as to whether Kyle Rittenhouse might find protection from any such civil suits under Wisconsin’s self-defense immunity statute.  So, that will be the focus of today’s content.

There are certainly lawsuits that are flying around this case, but I believe they are entirely focused on seeking compensation from the government of Kenosha, largely on the legal premise that the authorities had constructively, if not formally, deputized the men present with AR rifles and therefore is responsible for their conduct.

It’s not much of a legal argument, but I guess you work with what you’ve got.

In any case, I’m unaware of any civil suits filed against Kyle—but such suits certainly could be filed, so I’m getting a lot of inquiries as to how the civic court dynamics might play out here, and whether Kyle might avail himself of the state’s self-defense immunity statute.

Self-defense immunity is best thought of as a way to arrive at a determination of privileged use of force in self-defense in a relatively cost-effective and timely pre-trial hearing and possibly avoiding the tremendous cost and risk of a full-blown trial.

Absent self-defense immunity, a full-blown trial is the only way to combat a prosecutor intent on bringing you to trial on a use-of-force charge.  He brings you to trial on a criminal charge based on your underlying use of force—murder or manslaughter, for example, if you’ve shot somebody dead—and you raise the legal defense at trial of self-defense—sure, I shot him dead, but I meet all the conditions required for lawful self-defense (or, more accurately, the state can’t disprove any of those conditions beyond a reasonable doubt), and therefore the killing is legally justified (or privileged, as Wisconsin prefers to put it).

This traditional way of combating a charge of unlawful use-of-force can work, as we’ve just seen in the case of Kyle Rittenhouse, and have seen in many other cases, including that of George Zimmerman.

But a full-blown trial is an incredibly costly and time-consuming affair—and risky.

In terms of cost, a case involving a killing charge—as both Rittenhouse and Zimmerman’s did—can easily burn through $200,000 before it even gets to trial, just in pre-trial expenses.  Then the trial can readily be a multiple of that cost.  I’m reliably informed that the Zimmerman defense billed out at close to $2 million.

In terms of time, it’s not unusual for a case involving a killing charge to take a year or a year-and-half to get from event to trial, and then perhaps consume more weeks at trial.  During all this time the defendant’s life is essentially frozen—one does not make too many long-term plans when there’s a decent prospect you might be spending the rest of your life in a cage.

And, of course, there’s risk.  I often tell the clients in the cases I consult on that anyone we put in front of a jury has perhaps a 10% chance of being convicted, no matter how innocent they may be.  That’s just the “noise” in the system and a reflection of the reality that juries are dangerous and unpredictable creatures.

Nearly all of that cost, time, and risk of a full-blown trial can be side-stepped through the wonders of self-defense immunity.

Note: These are very often mistakenly referred to as a “Stand-Your-Ground hearing.”  Any time you hear that phrase spoken you can be fairly certain the speaker has no idea what they are talking about, and what is really being heard is not stand-your-ground but self-defense immunity. There’s no such thing as a hearing to determine stand-your-ground.  There may be a hearing to determine self-defense immunity.”

So, the person facing the legal liability for a use of force event demands a pre-trial self-defense immunity hearing.  There is no jury at this hearing, as no jury is selected until the trial, and we’re still pre-trial.  Instead, we have a kind of “mini-trial” at this hearing where the defense will argue their narrative of self-defense, the state will argue against self-defense, and the judge will act as both judge and as finder of fact (the role taken by a jury at a trial).

In this “mini-trial” the defense has the burden to prove self-defense by a preponderance (majority) of the evidence to the satisfaction of the hearing judge (who is usually the same judge who will be the trial judge, should things go to trial).  If they convince the hearing judge that they’ve met their burden, the judge grants immunity from criminal prosecution and/or civil suit.

Indeed, while Wisconsin law does provide for self-defense immunity, it does so only in the civil context, and not in the criminal context.  So, a defender can demand that pre-trial hearing, successfully argue self-defense, and be granted immunity from a civil suit—but that does nothing to immunize them against criminal prosecution.

Of course, Kyle Rittenhouse was just acquitted, so under the doctrine of double jeopardy he’s already “immune” from criminal prosecution—all he needs now is civil immunity.  So I guess he’ll be taking advantage of the Wisconsin self-defense immunity doctrine for civil liability, right?

Wisconsin Immunity Is Wrapped Within Its Legal Presumption

Unfortunately, the self-defense immunity process I described above, with the mini-trial and so forth, isn’t available as unconditionally in Wisconsin as it is in other states.  Instead, Wisconsin wraps its self-defense immunity privilege in a blanket of completely unrelated self-defense law doctrine—the doctrine of a legal presumption of reasonableness in the use of force in the context of an intruder into highly-defensible property.

This essentially gives that defender every one of the legal elements needed to justify his use of deadly force on the intruder—the only element not presumed is the element of Innocence, and that one’s kind of baked into the cake if a homeowner is facing off against an intruder.

So, if you’re defending your home, occupied vehicle, business against a forcible and unlawful intruder, and also meet a few other conditions, and also avoid a few specific exclusions, you get the benefit of being legally presumed to be privileged to use deadly defensive force.

Wisconsin has both.  But rather than keeping these two doctrines separate, as every other state with both does, Wisconsin buries its civil self-defense immunity privilege into the conditions for its legal presumption of reasonableness statute.

That means that all the circumstances, conditions, and exclusions of the Wisconsin legal presumption law now also apply in the context of qualifying for Wisconsin’s civil self-defense immunity.

In other words, you only qualify to even request pre-trial  civil self-defense immunity hearing in the first place if your use of force occurred in the context of defending your home, occupied vehicle, or business from a forcible and unlawful intruder.

Unfortunately for Kyle, none of his use-of-force the night of August 25, 2020, involved him defending his home, occupied vehicle, or business from a forcible and unlawful intruder—so he doesn’t even qualify to request a pre-trial civil self-defense immunity hearing in the first place, and so would never even have the opportunity to argue for immunity at all.

No Self-Defense Immunity for Kyle: But It’s Not ALL Bad News

Bottom line:  No self-defense immunity possibility exists for Kyle as a means to protect himself against possible civil suits in this case.

The good news is that I don’t think any such civil suits have been filed against Kyle by either survivor Gaige Grosskreutz or the families of Anthony Huber or Joseph Rosenbaum—and I’m not sure I would expect there to be.

The arguments for civil liability would be substantially less compelling than the argument for criminal liability, if only because the criminal prosecution was able to kind of link each use-of-force event together through a series of criminal charges specific to each involved “victim.”  In the civil case each of those events would essentially be considered in isolation—and each on its own merits looks wildly like lawful self-defense.

At the same time, of course, Kyle arguably has a counter-suit opportunity against at least Grosskreutz—not sure how that works in the context of a wrongful death suit brought by the family of Huber or Rosenbaum, but of course their own aggressive conduct in those fights would mitigate civil liability in any case.  I don’t expect Kyle to initiate a suit, but I would expect a counter-suit to be filed in response if any civil suit is filed against Kyle first.

It’s my expectation that the civil suits in this case will continue to focus on the government of the city of Kenosha, and its various agencies, particularly the police.  The central argument here appears to be that the city in effect deputized the people, like Kyle, walking around armed with ARs, and so the city should be responsible for damages that result.

It’s not a great argument, really, but it has a couple of things going for it.

First, the city has deep pockets, so plenty of money.

Second, it’s OPM—other people’s money.  Meaning, the politicians who might pay to settle any of these suits are not reaching into their own pockets for the payoff, they are reaching into the pockets of Kenosha taxpayers.

Third, politicians love the option of spending other people’s money to make their own political and legal problems go away.

So, it wouldn’t surprise me in the least if the city of Kenosha agreed to rather lavish settlements with Grosskreutz or the families of Huber and Rosenbaum—it’s what governmental agencies who find themselves in these circumstances tend to do.