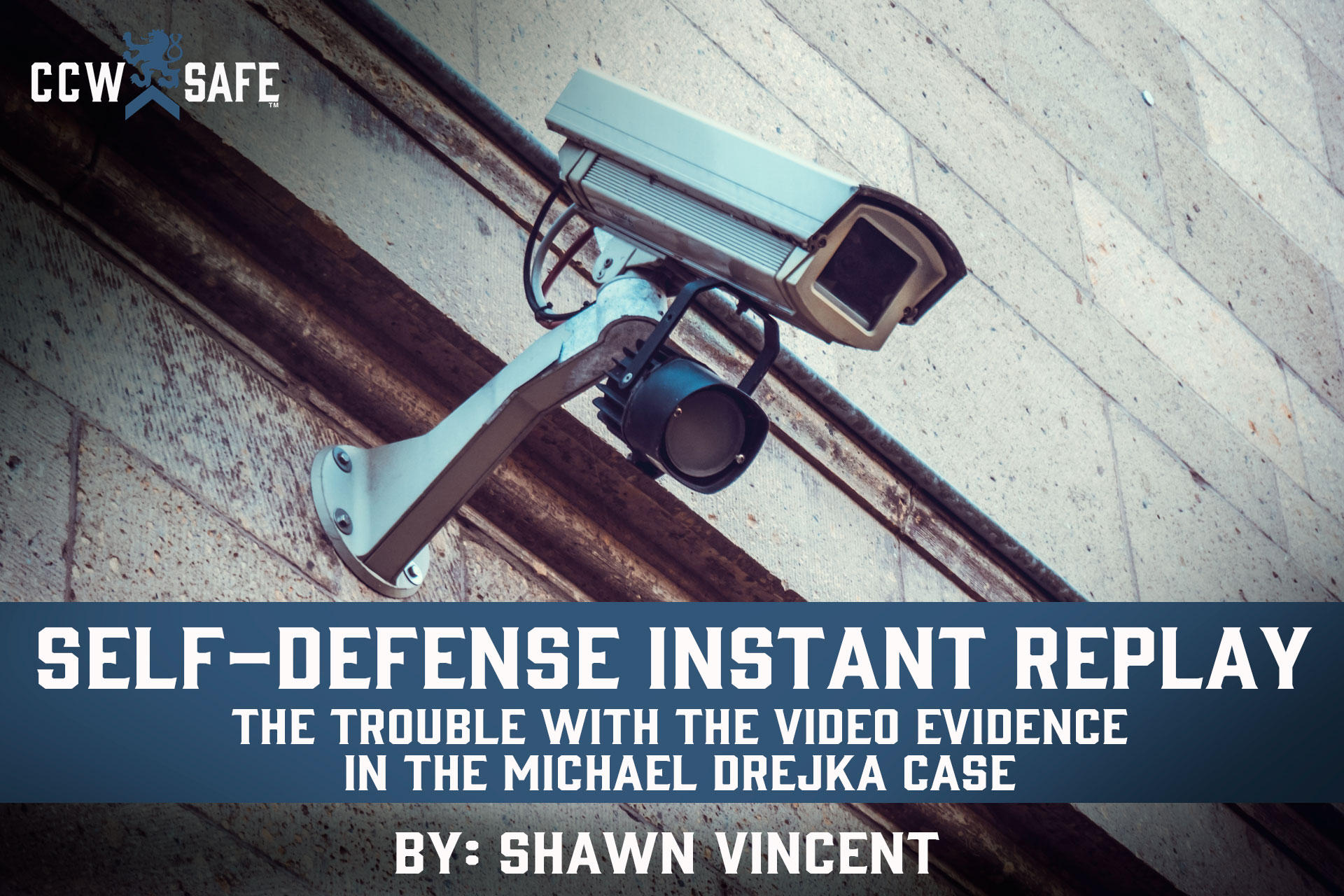 Posted on August 16, 2019 by Shawn Vincent in In Self Defense

The Trouble with the Video Evidence in the Michael Drejka Case

Michael Drejka faces trial on Monday, August 19, for the fatal shooting of Markeis McGlockton. Drejka shot McGlockton a little over a year ago during an argument over a handicapped parking space at a Clearwater, Florida convenience store. The shooter claimed self-defense. Initially, Pinellas County Sheriff Bob Gualtieri declined to file charges, citing Florida’s “stand-your-ground” law. However, after an investigation — not to mention public protests and broad national media coverage — the State Attorney charged Drejka with manslaughter.

Central to the trial will be the grainy surveillance video that captured the shooting. On the video, Drejka can be seen (but not heard; there is no audio) arguing with McGlockton’s girlfriend. McGlockton exits the store, sees the conflict, walks briskly towards Drejka and shoves him violently to the ground. Drejka sits up, retrieves a pistol holstered at his waist, aims, and fires a single round. McGlockton clutches his chest where he has been shot, lumbers back into the store, and collapses and dies at the feet of his five-year-old son.

There is no question about whether a jury will see the video. They will. But a judge recently heard arguments about how much of the video jurors would watch. Prosecutors wanted to show jurors the video of McGlockton dying as his terrified son looked on. Drejka’s lawyer, John Trevena, fought desperately to keep it out, saying “it’s really not relevant, and it’s highly prejudicial.” The judge agreed, and the heart-breaking scene won’t be shown during trial.

However, the defense and prosecution also disagree about the speed at which the video should be shown.  Prosecutor Fred Schaub wants to show the video at a reduced speed. “Every sport,” he says, “slow motion video determines what actually occurred, what actually took place. Somebody can say, ‘he was doing this, he was doing that.’ You can see what actually occurred in slow motion video.” For the defense, Trevena says, “If it’s not real-time, then it’s not really representative of what occurred — at least as the defendant perceived the events.”

During that pause, which lasts less than two seconds, McGlockton steps back and turns slightly away. It gives Drejka what prosecutors call “time to reflect.” He had a moment to reconsider whether McGlockton posed an imminent threat before he pulled the trigger. At trial, jurors will put themselves in Drejka’s position and ask themselves what Drejka was thinking in that moment. Played at regular speed, that pause passes quickly. Played in slow motion,  however, that pause seems to last much longer, giving the impression that there was more time to reflect.

The judge sided with the prosecution; he’ll allow the video to be slowed when presented to the jury.

Don West, veteran criminal defense lawyer and National Trial Counsel for CCW Safe, says that video can be a double-edged sword in a self-defense case. “The only thing the video can show is what it captures,” West says, “and video is often of poor quality, and it doesn’t always show the whole story.” That’s the case in the Drejka trial. The video is grainy. It doesn’t include audio. It only shows the shooting from one perspective, and it is not the shooter’s — and now it won’t even be played at the speed at which the event happened.

The prosecutor used a sports analogy to justify showing a slow motion version of the shooting at trial. It’s an instant replay. It sounds like Monday-morning-quarterbacking. The lesson for concealed carriers is that, if you are ever involved is a self-defense scenario, you could be Monday-morning-quarterbacked, too. Every action you made, whether shown frame-by-frame on video or revealed with forensic evidence, will be painstakingly analyzed. Being prepared to withstand such scrutiny means maintaining a  high state of situational awareness whenever you carry. You must adopt a mindset that establishes that any use of deadly force must appear reasonable — not just from your point-of-view — but from practically any point of view.