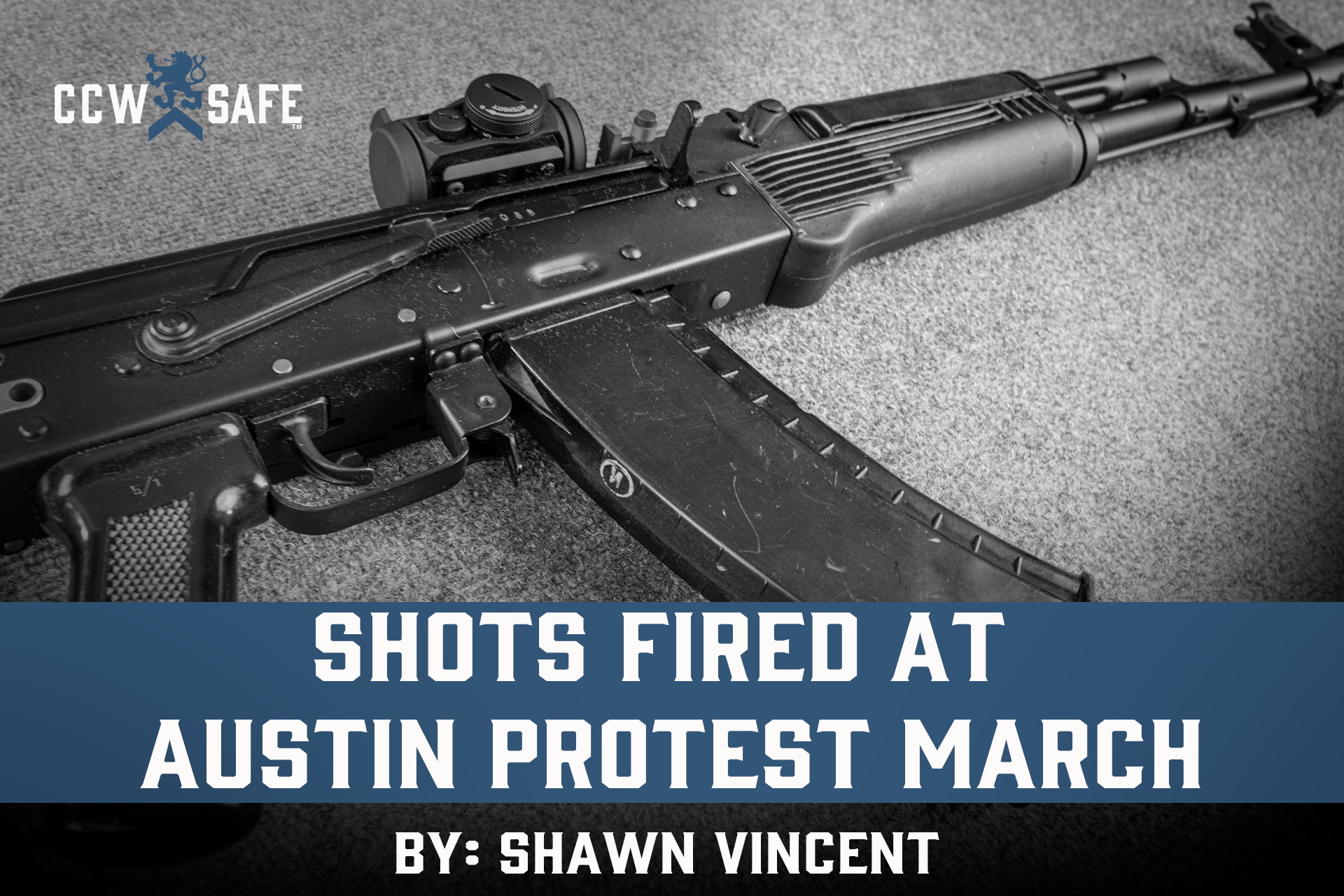 Posted on August 14, 2020 by Shawn Vincent in In Self Defense

Shots rang out at a Black Lives Matter march in Austin, Texas on the night of July 26. There were three people involved, each with his own firearm. One had an AK-47 and fired no shots. Another had a pistol, fired several shots and killed a man. The third fired shots that harmed no one. Who was justified? Who was not?

Perhaps you’ve encountered this story in the news. 28-year-old Air Force veteran Garrett Foster attended a Black Lives Matters protest. A staunch supporter of the Second Amendment, Foster carried his AK-47-style rifle during the march, which is his legal right to do in Texas. According to reports, he had carried a rifle at other recent protests without incident.

On July 26, however, Sgt. Daniel Perry, an eight-year Army veteran, was driving a rideshare vehicle when he turned into the crowd of protesters. According to a New York Times Report, Austin’s police chief, Brian Manley, told reporters that, “as the motorist turned, a crowd of protesters surrounded the vehicle, and some struck the car.”

As reported by KXAN, Perry’s attorney issued a statement that reads: “An individual carrying an assault rifle, now known to be Garrett Foster, quickly approached the car and then motioned with the assault rifle for Mr. Perry to lower his window.” Perry did, thinking Foster, dressed in a tactical vest, was a police officer. When Perry realized Foster was not law enforcement, according to the lawyer, and when Foster began to raise the weapon, the Army sergeant fired multiple shots, killing the armed protester.

After the shooting, Perry fled the scene and immediately called 911 to report the shooting when he reached a safe location. As he drove away, another individual in the crowd fired multiple shots at the fleeing vehicle. No one was injured by those shots.

As of this writing, although police investigations are underway, no one has been charged in connection with these incidents, and the legal justification of each of the armed men remains in question.

Recently, I spoke to Don West and Steve Moses about this case. Don West is a criminal defense attorney and National Trial Counsel for CCW Safe, and Steve Moses is a well-regarded weapons instructor and veteran of law enforcement.

We’ll start with Garret Foster’s decision to openly carry his AK-47 rifle at the rally.  Foster’s grieving brother told reporters from USA Today that Foster had a license to carry in Texas. “We’re an open carry state,” he said. He’s right, and there’s a history of gun rights groups in Texas openly carrying rifles during Second Amendment demonstrations. KVUE, in a report about Texas gun laws, quotes Chapter 411, Subchapter H, of the Texas Government Code, telling viewers that, “Texas does not prohibit the carrying of a shotgun or rifle in public and you don’t need a license to have one. “ Going by the book, Don West agrees: Foster was breaking no laws by choosing to carry his rifle to the protest.

Legal or not, and all politics aside, Steve Moses questions whether bringing a rifle to a protest is a wise choice. “We’re seeing people that are choosing to openly carry long guns in a situation in which normally they would not have,” Steve says. “ Anytime that anyone, regardless of their intent, does that, I think that they are putting themselves into a position where they can unintentionally or inadvertently cause themselves to get caught up in a bad situation.”

The Houston Chronicle once reported about a man who carried an AR-15-style rifle into a Texas shopping mall, terrifying a number of patrons and prompting calls to the police. The man was arrested for disorderly conduct, and considering Texas’s gun laws, the case went all the way up to the East Texas appellate court.  A Jefferson County prosecutor wrote in a pleading, “It is ludicrous to expect that any person would know (he) was exercising free speech rather than putting people’s lives in imminent danger.”

That prosecutor’s sentiment perfectly opens the conversation about whether Sgt. Perry was justified in shooting Foster in self-defense. The big question is whether Perry had reason to fear Foster and his AK-47.

Steve Moses says that before deadly force is used, “the other party has to have the ability to cause serious injury or death, the opportunity to do so, and the intent to do so.” As a trainer and firearms competitor, Steve says that, “a person who has a rifle at a low ready position can bring that muzzle up and, at a relatively short distance, get a shot off in somewhere between one-half and three-quarters of a second.” By all objective assessments, Foster had the ability and the opportunity to imminently cause Perry’s death.

That means the only remaining question is whether Foster had the intent. Foster’s brother said, “he would never threaten somebody. He was one of the most kindhearted people. . .” By all accounts, Foster was a good-natured individual (he had been a caretaker for his girlfriend who was a quadruple amputee), but Perry had no way of knowing any of that.

Don West suggests that Perry, as a soldier, would have been familiar with an AK-47 and what it could do, and his training put him in a better position than most to assess the threat Foster presented. “This isn’t anything more than a pretty straightforward self-defense analysis when you look at it in that regard,” Don says. “How it looked to Perry becomes the critical factor. Whether Foster really intended to shoot is not what makes Perry’s actions justifiable, it’s how it looks to Perry and whether his belief that Foster intended to shoot is reasonable. Even if Foster didn’t intend to shoot Perry, he did a whole lot of things — by approaching the car and lifting the gun — that made it look like he was.”

Police continue to investigate the shooting, but they have, as yet, made no arrest. Based on the facts we know, it appears Perry has a very strong case for self-defense, and may very well be found justified.

Now to the matter of the final shots fired at Perry’s vehicle as he fled the scene. Don West says, “You can only use deadly force in the face of an imminent threat of great bodily harm or death, and so far there are no sufficient facts that I’ve heard to actually support the notion that the spectator was under such a threat when he shot at the vehicle fleeing.“

This incident echoes some of the facts of the Michael Dunn shooting of Jordan Davis in the famous “Loud Music Shooting.” At Dunn’s first trial, the jury failed to reach a unanimous decision regarding whether Dunn was justified for shooting and killing 17-year-old Jordan Davis; however, they all agreed that Dunn was unjustified for firing shots at the teenagers’ vehicle as his friends fled the scene. They found Dunn guilty of three counts of attempted second degree murder for the shots that harmed no one.

Despite Foster’s brazen yet legal decision to open carry a rifle at a protest, and despite the fact Sgt. Perry has admitted to killing Foster, it may be that the third party who fired harmless shots in the immediate aftermath of a homicide is the least justified in his actions with his firearm. This is all speculation based only on the facts we know; the investigations are still open, and no one  has been charged or formally exonerated.

The lesson for concealed carriers is this:  How and when you carry a firearm, and whether you are justified in using that weapon in self-defense, is entirely contingent on the immediate circumstances. As a concealed carrier, you have the responsibility to maintain situational awareness at all times. Even if it’s legal to open carry a firearm, consider how your decision to open carry might be interpreted by strangers around you who don’t know your intentions. Don’t use your firearm in self-defense unless you perceive a threat that has the immediate ability and intent to inflict serious harm or cause your death. Finally, understand that as soon as a threat is no longer imminent, the legal justification for firing your weapon immediately vanishes.