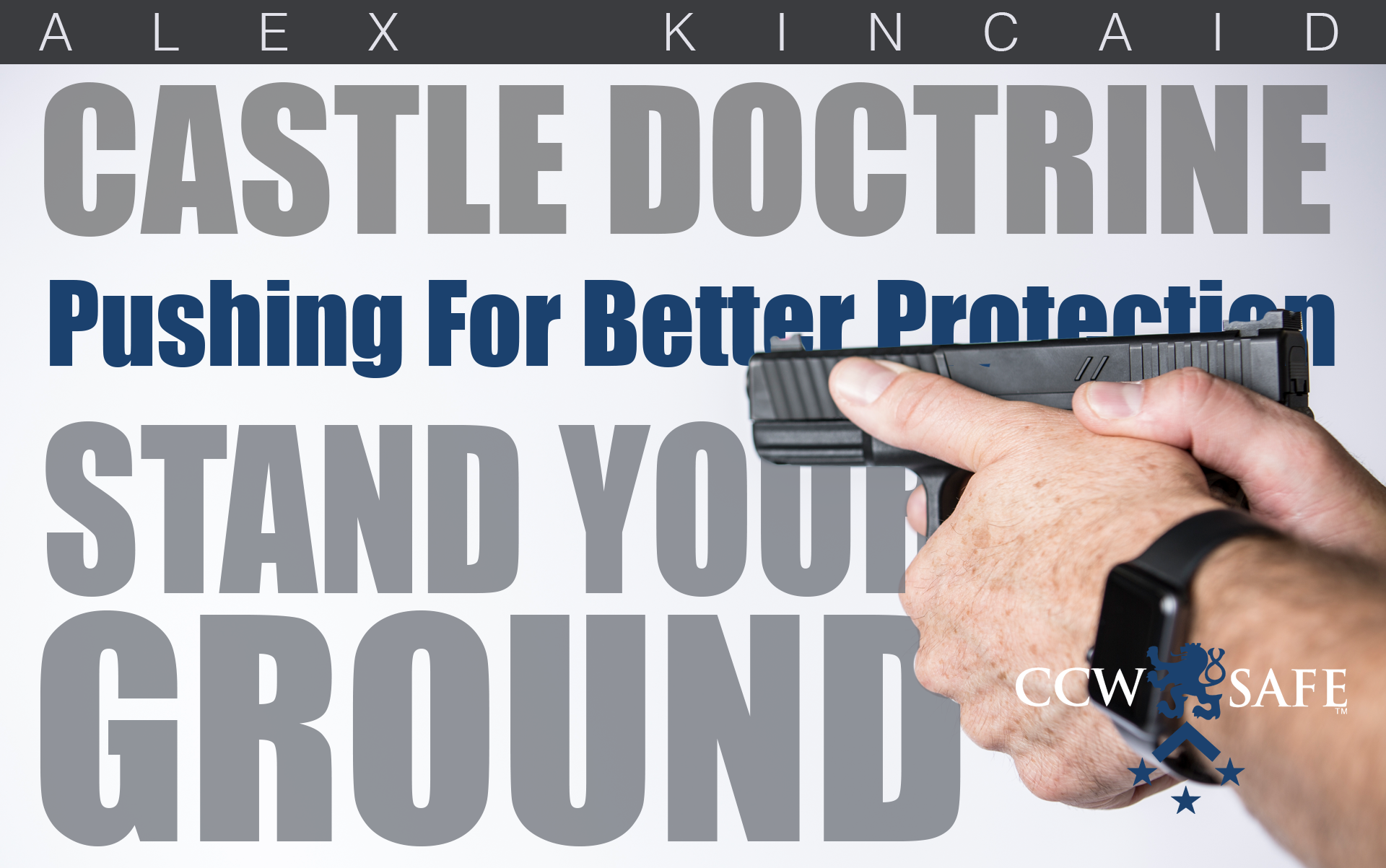 Posted on November 20, 2017 by support@ccwsafe.com in Alexandria Kincaid

Before 1895, it was unclear whether Americans had a common law duty to retreat before using deadly force.  But after a man by the last name of Beard shot a man by the last name of Jones when he came on the Beard property, concealed firearm in his pocket to aid him in stealing a cow, the United States Supreme Court stepped in to clarify.  The Court decided that Beard had no duty to retreat when threatened on his own property and when he did not provoke the assault by Jones.  Beard V. United States, 158 U.S. 550 (1895).  The Supreme Court slightly modified this decision later on to include that there is no common law duty for a person to retreat from anywhere he or she has a legal right to be.  Justice Holmes, in 1921, wrote the now famous words about the reason behind this basic “stand your ground” rule: “[d]etached reflection cannot be demanded in the presence of an uplifted knife.”  Brown v. United States, 256 U.S. 335, 343 (1921).

About half of our states have turned case law into statute, and codified some type of stand your ground law. The basic premise of a stand your ground law is that it will protect innocent victims who choose to use deadly force when faced with the threat of imminent death or serious bodily injury from prosecution, even if there was a possibility that they could have gotten away instead.

Although castle doctrine laws are similar to stand your ground laws, they have a narrower focus because they only protect people faced with deadly situations in certain locations. Just as a stand your ground law does not force a person to make a split-second decision about whether or not they can turn and run to safely retreat from a potentially deadly situation, a castle doctrine does not force a homeowner to make a split-second decision about whether a burglar intends to physically harm them or just steal a television set.

Both castle doctrine and stand your ground laws are designed to eliminate the need for crime victims to have to take the time to consider whether they could get away from the criminal or whether they have other options to protect themselves, such as calling 911 or hiding in a locked bedroom.  These laws are supposed to protect gun owners, because the time you spend considering your options could result in your death.

However, the actual protection provided by these laws varies greatly. The versions of them that actually protect you from prosecution or from juries hearing about your “other options” are rare.

Some common differences in these laws include:

Too many stand your ground and castle doctrine laws do not always prevent arrest, being held in custody, being charged for homicide and being prosecuted.  On top of it, these laws often do not prevent the prosecution from “back-dooring” in evidence of options available instead of deadly force.  For example, even though a state may have a stand your ground law that states that you do not have a duty to try to escape, the jury of your peers may still listen to evidence of all the other options that may have been available to you.  The prosecutor then may argue that using deadly force, under the circumstances where you could have escaped instead of pulling out your gun, was not what a reasonable person would have done.  The jury can then agree with this argument, find you guilty of some type of homicide, and send you to prison.

Since updating and strengthening its castle doctrine in 2005, Florida’s gun owners have enjoyed a law that whole-heartedly favors the victim, not the criminal, in self-defense shooting cases.  In other words, the law-abiding homeowner, not the intruder, is presumed to have acted reasonably (innocently) and does not need to explain much to law enforcement after using deadly force other than that an uninvited person was in their home.  In states with laws like Florida, if you are in your house or car, and someone comes in uninvited, the law presumes that person intends to harm you.  Put differently, the law “presumes” that you, the person who was not breaking the law and the actual victim in the incident, acted reasonably in using deadly force against an uninvited person inside your own home or a threat encountered in public. You should not be charged for using deadly force under these circumstances, but if you are, the law will also prevent a jury from ever hearing about any other options, such as running into another room, closing the door, and calling 911.  This presumption is what makes Florida’s castle doctrine the mother of all self-defense laws.

Florida was the first state to establish this presumption in favor of those who use deadly force in certain situations, but it is no longer the only one.  Florida’s law has become the statute of choice for other state legislatures looking for a castle doctrine role model.  Most states that have passed a castle doctrine law since 2005 have copied Florida’s statute in one or more ways.  These states include Alabama, Kentucky, Louisiana, Michigan, Mississippi, Oklahoma, Pennsylvania, South Carolina, and Wyoming.

While giving the law-abiding citizen, the actual victim, the benefit of the doubt when faced with a threat to their life or an uninvited person in their home makes sense to many people, not all people agree.  California’s deadly force laws provide us with a good example of an ineffective castle doctrine law.

California, of course, is a state known for its strong gun-control laws.  Surprisingly, California has a castle-doctrine with a Florida-style presumption of innocence written in its “Home Protection Bill of Rights.”  But while California’s law may purport to presume that you, the homeowner, reasonably feared great bodily harm or death from an intruder, its law has a host of other “things” you will need to be able to articulate in order to have the law apply.

For example, in California, your use of deadly force must have been reasonably necessary to defend against any danger, and you cannot use more force than was reasonably necessary to protect yourself.  In other words, the language of California’s statute has been greatly modified by activist judges, case by case, and despite the supposed presumption in a homeowner’s favor as written in the law itself, homeowners will face serious consequences if they shoot unarmed, non-threatening intruders inside their own homes. This is in part because prosecutors, under California’s law, are free to “rebut” the presumption in your favor with evidence that your behavior in shooting an intruder was not reasonable, and a gun-hating California jury of your peers is free to believe that argument.

There are countless examples of a what evidence prosecutors may choose to bring in to a trial in states with laws that allow it:  What if the intruder threw his gun down before you shot, but continued to stand there staring at you? What if you shot when he reached in his pocket to offer you money, but you thought he was reaching for a knife? What if you could have locked yourself in a room or left your home?  What if you had a few drinks in the privacy of your own home before the bad guy broke into your home?  Any of these facts could be introduced at your trial to show that although the law presumes you had a right to be in fear, your fear was not reasonable at the time that you pulled the trigger.

Remember the old saying that hindsight is 20-20?   In a trial in California and many states with similar, supposed castle doctrines, the need for split-second, adrenaline-rushed decision making is not protected when compared to all the other options you may have had…even if only in hindsight.  In contrast, in states with Florida-style protection, a jury would never hear these facts because a judge would decide, before a trial ever begins, that the castle doctrine applies.

Victims of violent attacks should not become prosecuted criminals.  People who are not criminally-minded act the best they can when faced with violent situations, and the law should seek to protect their lives over and above any criminal without questioning every option they may have chosen in the face of a deadly situation.  Working towards strengthening the stand your ground and castle doctrine laws in every state is a valid, justifiable endeavor, and every law-abiding American should support this effort. Many states have non-profit, Second Amendment groups.  Joining these state-level groups is a great way to support the Second Amendment in your home state and learn about the efforts that are needed to update and strengthen the stand your ground and castle doctrine laws where you live.