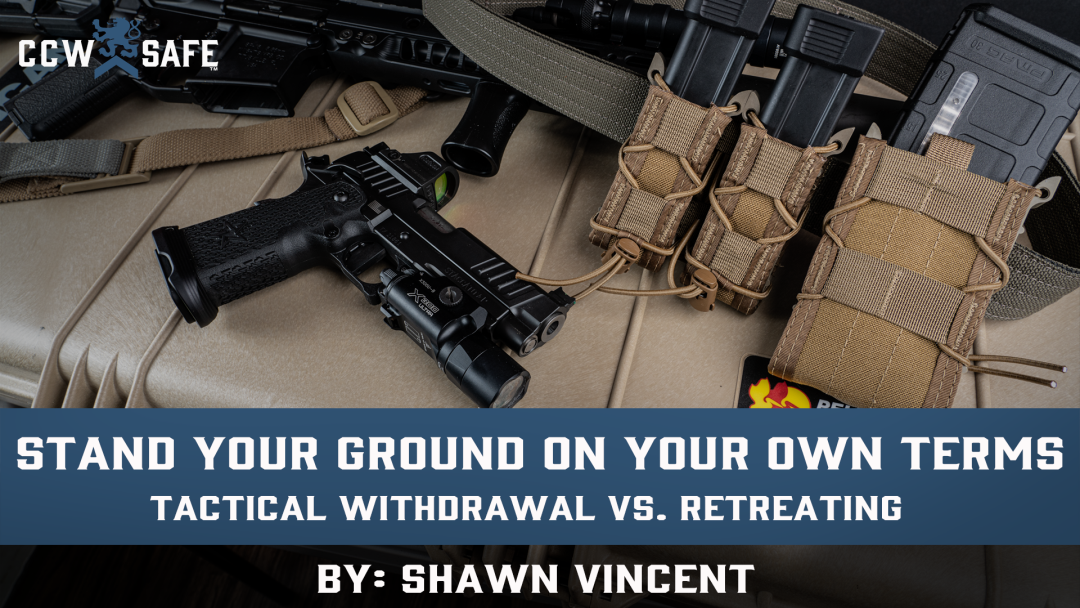 Last week, we revisited the Charles Dorsey case and offered some tactical analysis from Steve Moses, firearms instructor and CCW Safe contributor. If you recall, Dorsey shot a man who broke the latch on the front door and entered the Dorsey home after knocking, ringing the doorbell, and demanding to be let in over the course of a tense thirteen minutes not long after one in the morning. It turned out Espinoza was a guest of the neighbor. Drunk and disoriented, he thought he had been locked out of his friend’s house. It was a tragic misunderstanding.

While we acknowledged that, legally, Dorsey was well within his rights fire at Espinoza after he gained entry to the house, Steve Moses suggested that Dorsey had other options besides waiting at the front door. “He would have probably been in a better situation,” Steve says, “had he retreated along with his wife into a room, got in a hard corner — which is a corner on the same side of the doorway to the room — and then ensconced there and waited either for the police to arrive and take care of the situation or then deal with the person if he came into the room.”

Some took offense to the suggestion that a defender should have “retreated” in his own home, or that he should have just “waited” for police to arrive. I recently spoke to Steve Moses about the passionate and heartfelt feedback we received in response to the article, and he had some interesting clarifications and additional insights.

But before I get to that, I want to make sure you know a little about Steve Moses. He’s been a defensive firearms trainer for over 26 years. He is a recently retired deputy constable. He spent 10 years on a multi-precinct Special Response Team, which meant he worked with a highly-trained squad that served evictions and warrants to people who had failed to voluntarily comply — and that meant sometimes breaching the door and sweeping the dwelling one room at a time. He has multiple instructor certifications, including Rangemaster Advanced Handgun Instructor and Defensive Shotgun Instructor, Red Zone Knife Defense Instructor, Adaptive Striking Foundation Instructor, Modern Samurai Project Red Dot Sight Instructor, and he is a state of Texas licensed Personal Protection Officer Instructor. As part of his training for the Special Response Team, he took 40 hours of SWAT school and took classes on high-risk entry, hostage rescue, high-risk warrants, mechanical breaching, and high-risk entry planning.

As a point of clarification, Steve was absolutely not suggesting that a homeowner retreat from an intruder who had just forced entry right before his eyes. “If I were walking up to that door,” Steve says, “because someone was knocking on it, and then the door burst open, I’d probably stand my ground right there.”

But Steve’s assessment changes if the potential intruder is banging on the door and has not yet breached the threshold. “The thing about staying in that position,” he says, “and being that close to the door, standing my ground — that gives me no time, or no meaningful time to respond to what I may see at any given moment, when all of a sudden the door comes open, the person presents himself. I then have to read all this information. What am I seeing? Can I process what I’m seeing? And can I respond to that effectively?”

We’ve agreed not to use the word “retreat” any more in the context of self-defense unless we’re talking about the legal “duty to retreat” in some jurisdictions. We’ll talk about avoidance, and de-escalation, and “tactical withdrawal,” but we’ll leave “retreat” for very particular circumstances.

Sometimes we have to “go loud,” Steve acknowledges. “But if we’re going to have to fight, and we’re forced into that situation, I’d very much prefer to do it on my own terms.”

Steve’s opinion is based on his time working on the Special Response Team. “I gained an understanding of how important location was when it came to coming into contact with a potential aggressor. There were several entries in which I participated when our team came in contact with persons in the house just inside the threshold, and basically, during those encounters, I felt like that was a relatively level playing field — that is, we saw that person literally as quickly as they saw us.”

“We would then have to clear the house,” Steve continues, “and it was during that time that my blood pressure would typically ratchet up a little bit, because we felt like anytime we went room to room, we knew that if there was a person in a hard corner ostensibly armed with a firearm, they were going to see us before we saw them.”

When you can buy yourself time and safely put distance between you and the threat, generally that increases your tactical advantage. Don West, criminal defense attorney and National Trial Counsel for CCW Safe says that time and distance can also bolster your self-defense claim in the wake of a shooting. “It helps your case,” Don says.  “If you do wind up having to justify your conduct, if you can show that you in all ways acted reasonably, even perhaps more so than the law technically requires, that you didn’t react out of an irrational or unreasonable fear, that you weren’t acting out of anger — all that affects how a prosecutor, and how ultimately a jury would look at the case.”

What we offer in these articles is the benefit of experience. Steve Moses has over a thousand hours of training, and he has live tactical experience most will never have. Don West has represented multiple defendants who faced murder charges in the wake of a self-defense shooting, and he knows what things spell trouble for a legal defense. We explore these cases so concealed carriers and gun owners concerned with home defense can see how real-life self-defense scenarios unfold. We find lessons in those cases so that we all may be more well-prepared if we ever face the nightmare of a home intruder, or an armed robber, or any other belligerent assailant.

One of the things we have learned is that every self-defense claim hinges on the myriad facts unique to that incident. As a concealed carrier, if you are ever in a situation where you feel you need to use deadly force, only you can make that decision based upon the facts as you see them in the moment. The more we understand how others have navigated life-or-death self-defense scenarios and see what consequences they faced, the more prepared we’ll be to make good choices.

Perhaps Steve Moses says it best: “The ultimate objective is that we protect ourselves, we protect our family, and we don’t put ourselves in a situation where we might find ourselves charged with a crime, whether we believe that’s justified or not.”