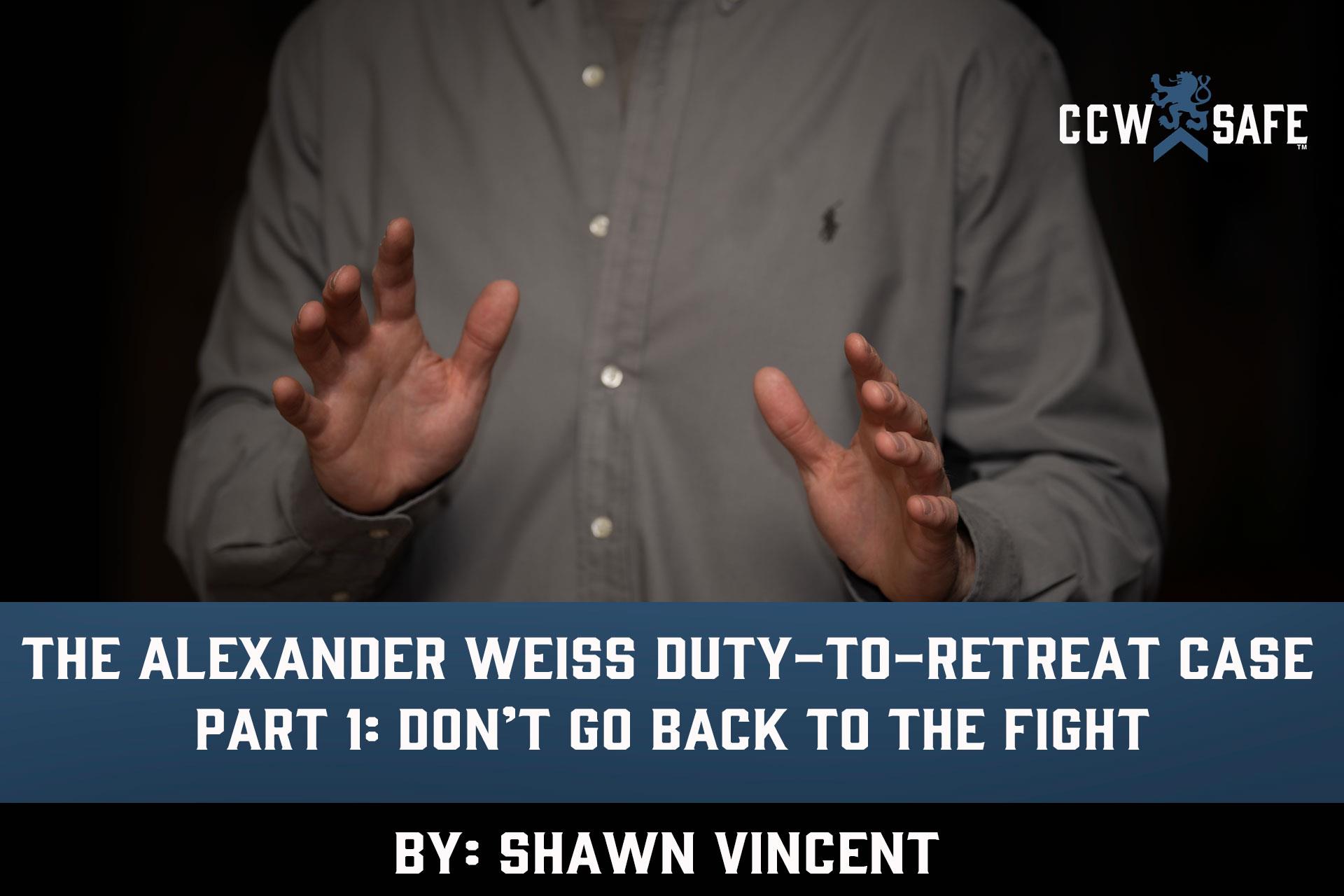 Posted on May 8, 2020 by Shawn Vincent in In Self Defense

Part 1: Don’t Go Back to the Fight

Twenty-five-year-old Alexander Weiss was on his way to referee a basketball tournament in Cannon Falls, Minnesota in January 2018 when he witnessed a silver Chevy Cavalier skid sideways through an intersection and smash into a curb. Weiss drove past the car and pulled over, intent on offering help, but before he had the chance, the driver of the Chevy revved his engine and smashed “pretty forcefully” into his vehicle. Weiss got out of the car to deal with the aftermath of the collision.

A passenger emerged from the other car, Nah Dukart. He was yelling, and according to reporting by the Post Bulletin, Weiss testified that Dukart had his shoulders up and his fists balled. Weiss told jurors that Dukart accused him of causing the crash, and when Weiss threatened to call police, Dukart threatened to kill him.

Weiss went back to his still-running car and retrieved his cell phone and took  his Glock pistol from the glove compartment and slid it into his jacket pocket. Then he engaged with Dukart. “I believe it’s a crime if you leave,” Weiss said in an effort to justify his choice to continue the confrontation.

Things got worse from there. The driver of the silver car, seventeen-year-old Muhammad Rahim, joined the confrontation, and as Weiss backed away, the two got between him and his vehicle. That’s when Weiss displayed his pistol, pointing it to the side and at the ground. According to Weiss, Rahim laughed and said, “That’s not even a real gun,” and then spat on him. After that, Weiss says, Rahim tried to grab the gun, so he chambered a round and held it at Rahiem’s chest. At trial, Dukart said Rahim’s response was, “do it then.” Weiss fired a single fatal shot.

In the aftermath of the shooting, the Olmstead County Attorney’s Office charged Weiss with second degree murder. The key to the state’s case would be convincing a jury that Weiss had the opportunity to flee from Dukart and Rahim’s aggressive behavior but chose, instead, to stay and ultimately shoot Muhammed Rahim. Minnesota is a “duty to retreat” state. Don West, National Trial Counsel for CCW Safe says that duty to retreat laws mean “you have to get out of there if you can without increasing your own risk of harm. If there’s an avenue of escape, you have to take it before you can use deadly force.”

Olmsted County Attorney Mark Ostrem said it like this: “The law requires that deadly force be employed only after attempts to avoid danger have been made and there is no other option.”

The clear opportunity for Weiss to get away was when he went back to his car to get his phone and gun — right after Dukart’s first threats. Don West questions why Weiss didn’t just lock himself in his car and call 911. “You’re pretty safe in your car if they don’t have a weapon,” he says. “This is in the middle of the day and there’s nothing to suggest that his car was disabled, that he couldn’t have just driven away at any point he wanted to.”

The defense argued that it’s illegal to leave the scene of a vehicular collision, which is true, but Ostern countered that “We never really said he had to drive away.” According to reporting from the Star Tribune, Ostern suggests Weiss could have walked far enough away to diffuse the situation while staying in the general area, or he could have gotten in his car and called police. “Instead,” Ostern says, “he went back to his car . . . and then came back out. That’s where things went wrong.”

This has echoes of the Marissa Alexander case. After being attacked by her estranged husband in her own house, Alexander escaped to her garage. She said she couldn’t get the garage door open to leave the house, so she decided to retrieve her pistol from her vehicle and go back inside the home where she encountered her estranged husband once again. She fired a single warning shot and was later charged with attempted murder. A critical weakness in her legal case was her decision to re-engage her attacker after successfully retreating to a safer place and arming herself. She was convicted and spent 1,000 days behind bars.

There is also a parallel with the Gyrell Lee case. Lee and his cousin had been verbally accosted by Quinton Epps throughout the night on New Year’s Eve 2012. Epps kept coming by the yard where they were celebrating, and with each encounter, he became more aggressive. At one point, Lee decided to get his pistol from his car “out of instinct,” he told investigators. He ended up using it not long afterward when Epps shot Lee’s cousin during a fight. A jury convicted Lee of second-degree murder.

Weiss, if you were wondering, was tried twice, but each trial resulted in a hung jury, with some jurors obviously unwilling to convict Weiss when the other party so clearly initiated the confrontation. After two failed attempts to convict, the prosecutor begrudgingly dropped the charges.

All three defenders, Lee, Alexander, and Weiss, left a threatening situation, went to a safer location, retrieved a pistol from their vehicle, and then returned to the threat where they ultimately felt compelled to fire their weapons in self-defense. Whether you have a duty to retreat, as Weiss did, or if you’re in a stand-your-ground state, as were Lee and Alexander, returning to the fight with a gun after you’ve disengaged — especially when there are no other people to protect — is practically always a bad idea. It radically increases the chances you’ll use the firearm, and it drastically undermines your self-defense claim if you do.

As a concealed carrier, if you ever find yourself leaving a confrontation to retrieve your weapon in anticipation of violence, ask yourself if the dispute is really worth shooting someone over. Can you safely walk away?  Whether your state is stand-your-ground or duty-to-retreat, if you escape a conflict with enough time to get a gun, then you can keep going and avoid the confrontation altogether. Don’t go back to the fight. If the aggressor follows you and forces a confrontation, you can make a good-faith argument that you tried to avoid the situation, and your self-defense claim will be built on a more solid foundation.