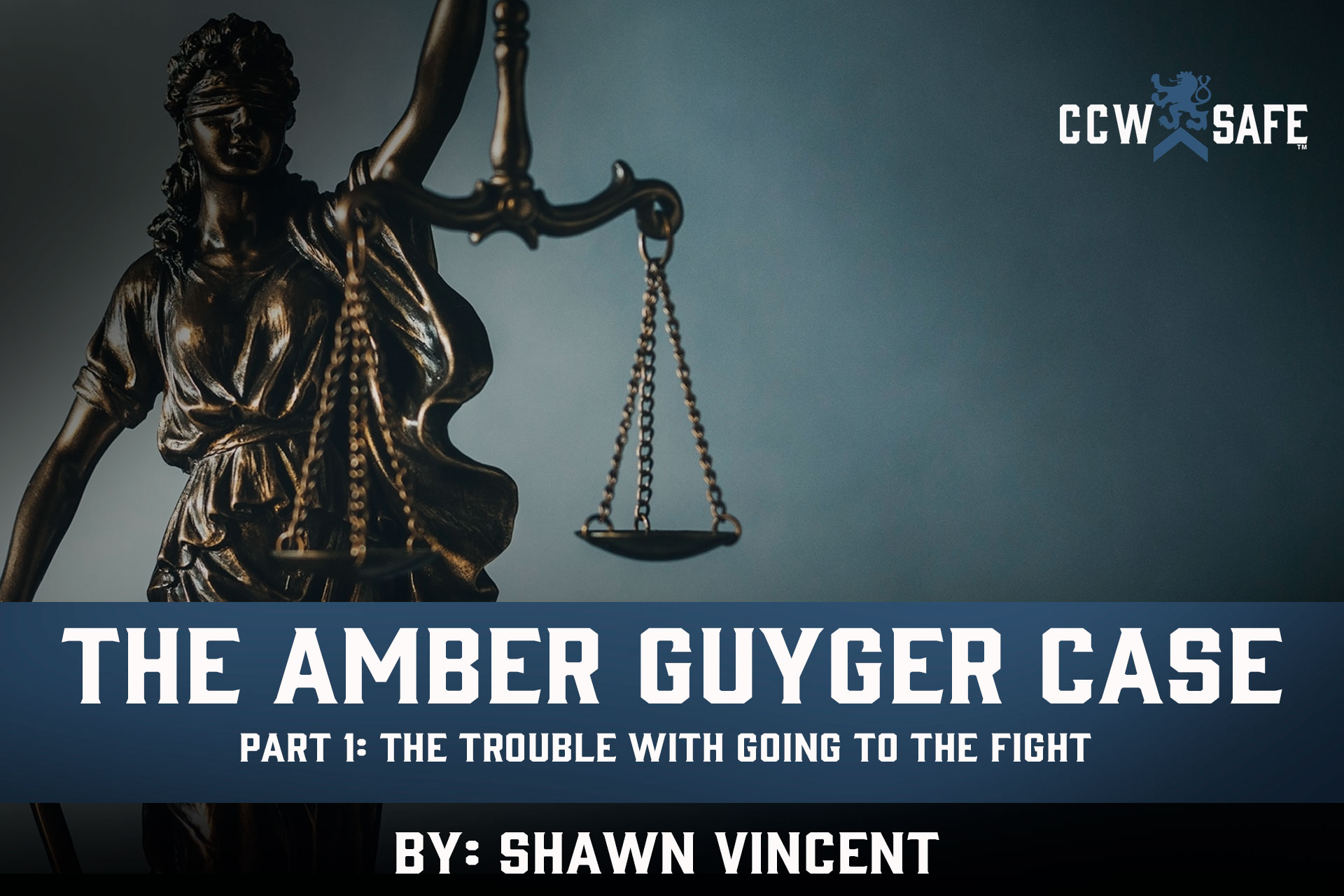 Posted on January 17, 2020 by Shawn Vincent in In Self Defense

The Amber Guyger Case Part 1: The trouble with going to the fight

Part 1: The trouble with going to the fight

Off-duty Dallas police officer Amber Guyger returned home on September 6, 2018, exhausted after a14-hour shift. When she got to her apartment, the door wasn’t locked. Testimony at trial revealed that the hotel-style door locks sometimes didn’t latch all the way. She said she heard shuffling inside. She entered the darkened apartment and encountered a “large silhouette.” Still in uniform, she issued commands, but the intruder did not respond. He came toward her. She fired twice, striking the man once in the chest.

Guyger’s horror during the minutes following the shooting was captured in her harrowing 911 call as it becomes clear to her that she had entered the wrong apartment. She didn’t kill an intruder; she had mistakenly entered her upstairs neighbor’s apartment and fatally shot 26-year-old Botham Jean in his own home. During the call, Guyger pleads with dispatchers to send EMS. She expresses concern that she will lose her job. She says 19 times, “I thought it was my apartment.”

She did lose her job, and three days later, she was arrested for manslaughter. Later, after the story of a white police officer shooting an unarmed black man in his own home made national headlines, a grand jury indicted Guyger for murder. On October 1, 2019, a jury found her guilty, and the next day, they sentenced her to 10 years in prison.

Guyger’s legal defense asserted that she thought she was in her own home, and that she shot Jean in self-defense. The claim sparked controversy, causing victim’s advocates to ask how a shooter could claim protection under the Castle Doctrine when she had entered someone else’s home.

While it sounds counterintuitive, CCW Safe National Trial Counsel Don West says, legally, such a claim could make sense. “If the jury really believes that you’ve made that mistake in perception, then they’re supposed to accept that, and then under that set of perceived realities, decide whether the actions were reasonable.” We know the jury found Guyger guilty, so that suggests that either they didn’t believe she thought she was in her own apartment, or the jury found her actions unreasonable.

Regarding whether or not the jury believed Guyger’s claim, odds are they did. Guyger offered very compelling testimony at trial, and in an interview with reporters, a juror said, “We all agree it was a mistake.”

If that juror’s representation is accurate, and all the jurors agreed Amber Guyger mistook Jean’s apartment for her own, then the logical conclusion is they felt her use of deadly force was not reasonable. If Guyger’s self-defense claim sparked outrage with victims’ advocates, then the jury’s verdict to convict a woman who fired on what she believed to be an intruder in her own home is just as likely to trigger outrage from gun-rights advocates.

While the Castle Doctrine provides broad protections to individuals who defend themselves with deadly force in their own homes, we know from other cases we’ve explored in this series that those protections are not without limits.

Recently, we dissected the Marissa Alexander case where a mother retreated to her garage to escape abuse from her estranged husband, only to be charged with aggravated assault after she returned to the interior of the home with a pistol and fired a single warning shot.

We have also written about the Ted Wafer case where the Deerborne, Michigan man was awoken around 4 am to the sound of violent pounding on his front door. Rather than call 911, Wafer retrieved his shotgun and opened the front door. He shot an unarmed 19-year-old in the head, killing a young woman who was drunk, high, injured, and most likely looking for help. A jury convicted Wafer of second degree murder.

In both the Alexander and Wafer cases, the shooter left a place of relative safety to engage the perceived threat, and that’s exactly what happened in the Guyger case. While jurors may have believed that Guyger didn’t notice she was at the wrong apartment at first, they learned at trial that Guyger heard scuffling sounds inside the apartment and that the door lock had malfunctioned, and it was suggested that, no matter how tired was from her long shift, she should have been on alert that something was amiss.

Prosecutors argued that Guyger’s police training would require her to call for backup before entering a building with a potential burglar inside. Guyger lived alone, and her dog was being boarded at the time, so there was no suggestion that she feared for the safety of someone inside. Instead of calling for help, Guyger chose to meet the potential threat in the apartment on her own.

“I knew someone was moving around inside my apartment,” Guyger testified, “so I wanted just to find that threat.”

Don West says, “It’s a decision she didn’t have to make, and it had the risk of increasing her own danger.”

“Why wouldn’t she maintain her position of relative safety,” Don West asks, “until she had some people with her that could figure it all out?” West stresses that a homeowner has the right to defend themselves in their own home, and there is nothing illegal about entering your home, even if you suspect there is an intruder inside. Nonetheless, the lesson for the concealed carriers is that, if you return home and suspect an intruder is inside, if there is no immediate danger to yourself or another, you can call the police and ask for backup before risking a deadly encounter.

Criminal defense lawyer and CCW Safe contributor Andrew Branca says, “when you go to the fight, rather than the fight coming to you, that’s not going to look much like self-defense to a lot of people.” Presumably, that’s how the Guyger jury interpreted the defendant’s actions. She ignored warning signs and went to the fight. I didn’t look like self-defense, and in the end, they found her use of deadly force was not reasonable.