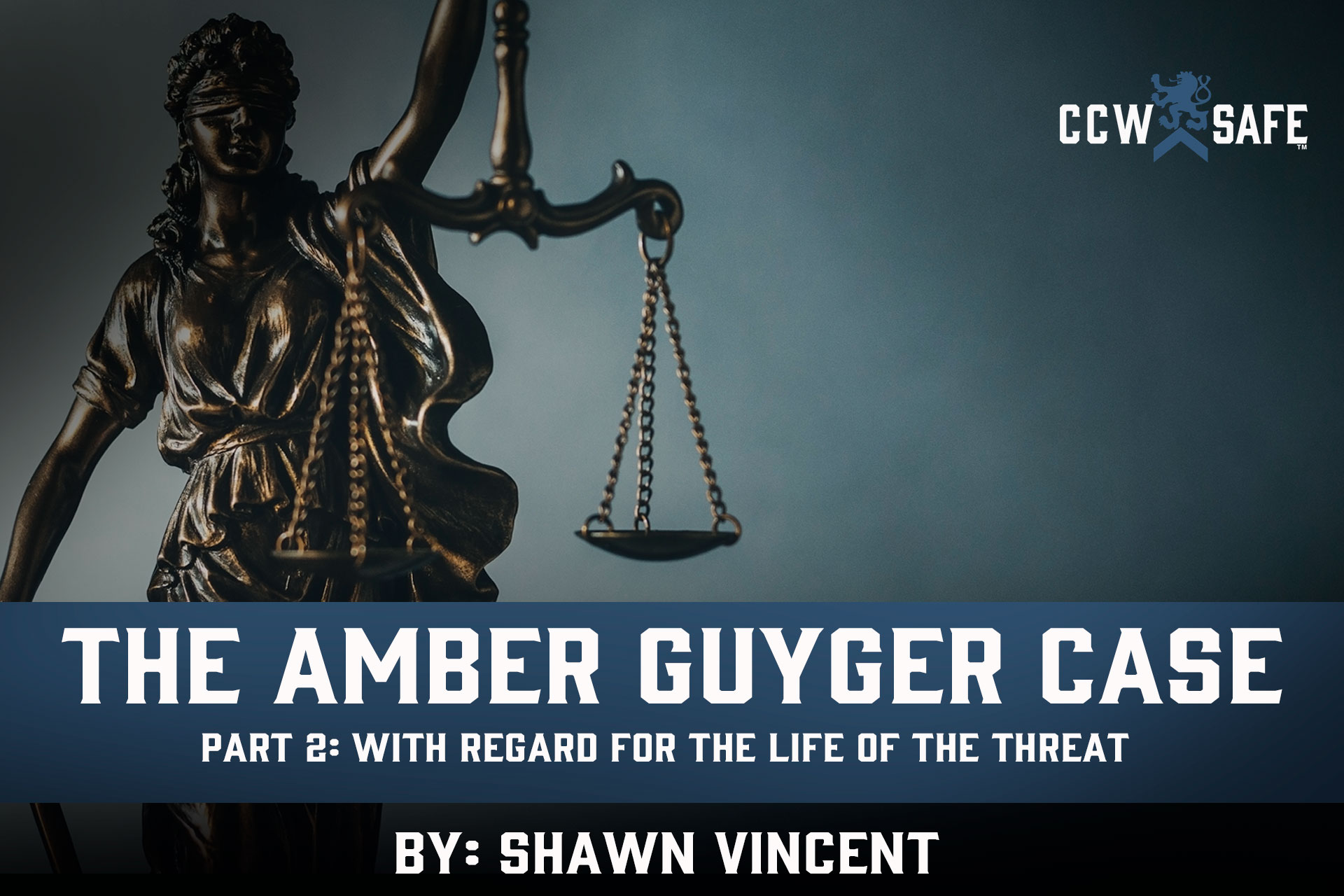 Posted on January 24, 2020 by Shawn Vincent in In Self Defense

The Amber Guyger Case Part 2: With regard for the life of the threat

Part 2: With regard for the life of the threat

After a 14-hour shift, off-duty Dallas police officer Amber Guyger returned home to her SouthSide Flats apartment. Distracted and exhausted, Guyger inadvertently parked on the fourth floor of the garage, rather than the third floor where she lived. She didn’t notice her mistake as she walked down the hall. When she got the door where her apartment would be a floor below, she found it slightly ajar. She heard “shuffling” inside.  She entered the darkened apartment, and she saw a “dark silhouette.” The figure moved toward her. Thinking she was facing an intruder in her own apartment, Guyger fired her sidearm and killed 26-year-old Botham Jean in his own living room.

Ultimately, Guyger faced murder charges for the tragic shooting, and on October 2, 2019, a jury sentenced her to ten years in prision.

At trial, lead prosecutor Jason Hermus, a former Dallas police officer himself, questioned Guyger. “When you aimed and pulled the trigger at Mr. Jean — shooting him in center mass right where you are trained — you intended to kill Mr. Jean?”

That answer caused a potentially big problem for Guyger’s legal defense. In a murder case, defendants often face lesser charges — such as manslaughter — which carry less severe penalties. A big legal distinction between manslaughter and murder is the intent of the shooter. Murder is an intentional act; manslaughter is not. When Guyger said she agreed that she “intended to kill Mr. Jean,” did she admit to murder on the stand?

Don West, criminal defense attorney and National Trial Counsel for CCW Safe, says he believes Guyger misspoke when she gave that answer. Nervous, emotional, and under extraordinary stress, it’s likely that she meant that she intended to shoot Jean center mass, not necessarily to kill him. As the prosecutor must have known, that’s what police are trained to do.

As a concealed carrier, your training is likely similar. “Your goal is not to kill the person,” Don West says. “Your goal is to neutralize the threat. Stop the threat.” Your actions before an after a shooting should reflect that sentiment, because any suggestion of malice or disregard for the value of life could lead to prosecution and conviction on murder charges.

Guyger’s testimony regarding her intentions were not the only things she said that cast doubt on her regard for the life of Botham Jean. Prosecutors pointed to comments she made during a five-and-a-half minute recorded 911 call, suggesting she cared more about herself than the young man who was dying right in front of her. “I’m done,” she says. “I’m f**ked,” and “I’m going to lose my job.”

It would be up to a jury to decide Guyger’s true intentions, and they had other evidence to weigh. The very same 911 call where Guyger expresses concern for her job begins with her pleading with the operator to dispatch EMS, and throughout the call, she can be heard speaking to Jean, saying “come on man,” and “hey, bud they’re coming.” Guyger’s actions bore scrutiny as well. Although Guyger testified that she tried to administer first aid, the prosecutor pointed out that she failed to use the first aid kit that she carried as a police officer.

Don West says that what a shooter says and does following a shooting has no direct bearing on the lawfulness of the shooting itself, but prosecutors can use those words and actions to suggest the shooter had malice or was callous or uncaring about what they had done. In that light, he suggests that if it’s safe to do so, defenders should always render aid, no matter how strange it may feel to try to save the life of the person you believe just threatened your life.

In Guyger’s case, the concern she expressed for Jean during the 911 call, and the emotion she exhibited during testimony clearly had an impact on the jury and helped mitigate some of the negative inferences of her other behavior. Although the jury found Guyger guilty of murder, they only gave her a ten-year sentence. It was a murder conviction with a manslaughter punishment.

One of the jurors spoke to reporters after the verdict. She acknowledged that some people would have a problem with the short sentence, but she said, “Amber Guyger, ever since she killed that man, she has not been the same, she showed remorse in that she is going to have to deal with that for the rest of her life.”

In tearful testimony, Guyger said, “I wish he was the one with the gun and killed me. I never wanted to take an innocent person’s life, and I am so sorry.”  It seems the jury believed her.

The lesson for concealed carriers is that when you decide to holster a deadly weapon, you should also arm yourself with a deep respect for the value of human life. You should think about it every time you carry your weapon, and you should remember it when you encounter situations that could lead to a confrontation. What’s in your heart will affect how you behave and what you say before, during, and after a life-threatening situation. I believe that if you’re honest with what’s in your heart, should you ever find yourself unable to avoid a life-or-death self-defense scenario, it’s much more likely that you’ll be found justified in your actions.