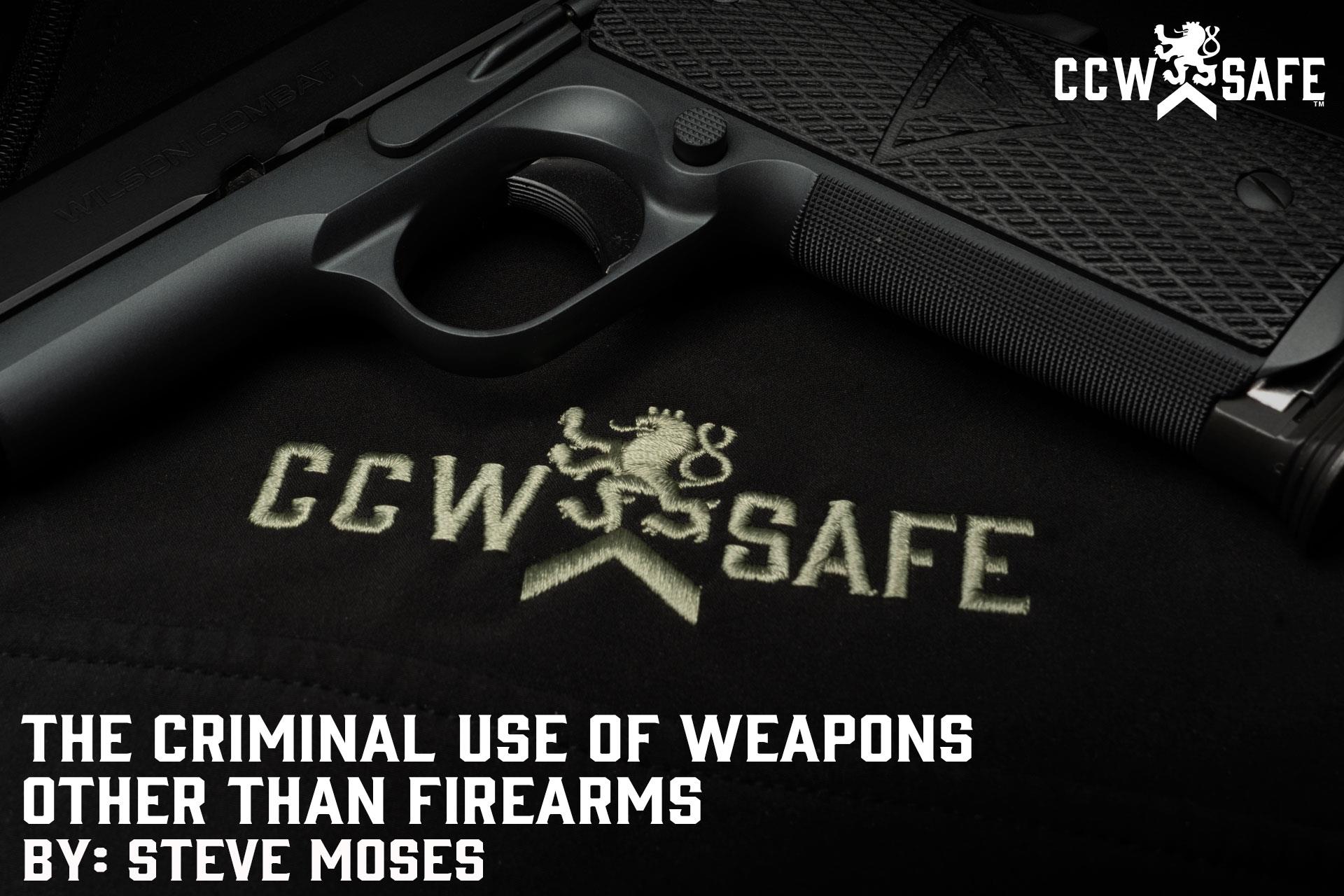 Posted on February 14, 2022 by Steven Moses in Uncategorized

THE CRIMINAL USE OF WEAPONS OTHER THAN FIREARMS

Most concealed carriers are not mentally and physically prepared to defend themselves against a contact-distance assault that may be sprung from only a few feet along with the morale-crushing realization that they are in grave danger and incapable of responding effectively.

Mark Twain was once purported to have said there are three kinds of lies: lies, damned lies, and statistics. I am of the opinion that this means that statistics may be manipulated to support a particular cause. Despite that some of the statistics set out in this article are not perfectly accurate does not mean that they are not telling. It appears that if a concealed carrier is attacked the odds are good that the weapons used against him or her may not involve firearms. What is concerning is that the manner in which weapons other than firearms are used is certainly different from the manner in which firearms are used. The reason is simple. Firearms are distance weapons that do not require actual physical contact in order to maim and kill.

The United States Department of Justice National Crime Victimization Survey for the years between 1993 and 2001 estimated that only 26% of the average annual 8,900,000 violent victimizations involved the use of a weapon. It estimated that firearms were used in 10% of the instances in which weapons were used. Six percent were committed with a knife or sharp object, 4% were committed with blunt instrument, and 6% were either other objects, unspecified, or unknown.

According to the Federal Bureau of Investigation Uniformed Crime Report, edged weapons and cutting instruments (including screwdrivers) were used four times more than rifles in murders in 2017. During that same time period, blunt objects such as hammers and clubs were used to commit 467 murders, and 692 people were killed with hands and feet. These numbers are likely misleading. Injuries sustained in attacks where weapons other than firearms were used are less likely to result in the death of the victim because of advances made in EMS services, rapid transports, pre-hospital trauma life support, and the current skills of trauma surgeons. Crime victims suffering injuries sustained during Aggravated Assaults may suffer emotional, mental, and physical health issues for the rest of their lives.

Concealed carriers sometimes discount the risks of being assaulted when exposed to reports that show a disproportionate amount of violence occurs within certain age groups, genders, races, and locations. While that might be statistically correct, it is important to understand that the stakes are still high even if the odds are low. Those same concealed carriers should avoid becoming complacent. The objective of this article is to shed light on the possibility that if a concealed carrier is attacked there is a reasonable chance that it will involve contact weapons like hands, feet, knives, and blunt instruments.

A standard skateboard deck alone weighs between two and three pounds. Add the truck, bearings, and wheels and the total weight is closer to seven to eleven pounds. A Major League Baseball bat weighs between two and three pounds. Both are formidable weapons in the hands of the wrong person. A medium-sized padlock only weighs about five ounces, but it can be used to maim and kill when inserted into a sock and swung with full force. One was used to end the life of Boston mob boss Whitey Bulger while in prison, with officials stating that the severity of his injuries rendered him almost unrecognizable.

Concealed carriers are encouraged to appreciate the threat posed by blunt instruments, edged weapons, and even fists at distances outside of normal conversation range and be aware of the difficulty that lies with defending themselves when attacked by a person who is capable of using them with deadly effect. As combatives instructor and Firearms Trainers Association member Cecil Burch so aptly put into words: “Too close is farther than we think.” The speed at which an attack can unfold, the ability of an attacker to cover a distance the length of a car in less than the two seconds, the need for the concealed carrier to recognize what is happening and respond by drawing the concealed handgun and firing it accurately with a possibility of the backdrop consisting of a crowd of people, and the relative ineffectiveness of handgun rounds when it comes to quickly stopping a motivated attacker increases the odds that the concealed carrier is going to be struck and knocked down, knocked out, grievously injured, or killed.

On the other hand, a concealed carrier who is willing to train under the right instructors, develop and maintain good gunhandling and marksmanship skills, and, as the late William Aprill so eloquently stated, in possession of “a fully-formed mental map of the expected terrain” has greatly increased the odds that he or she will never become just another statistic.