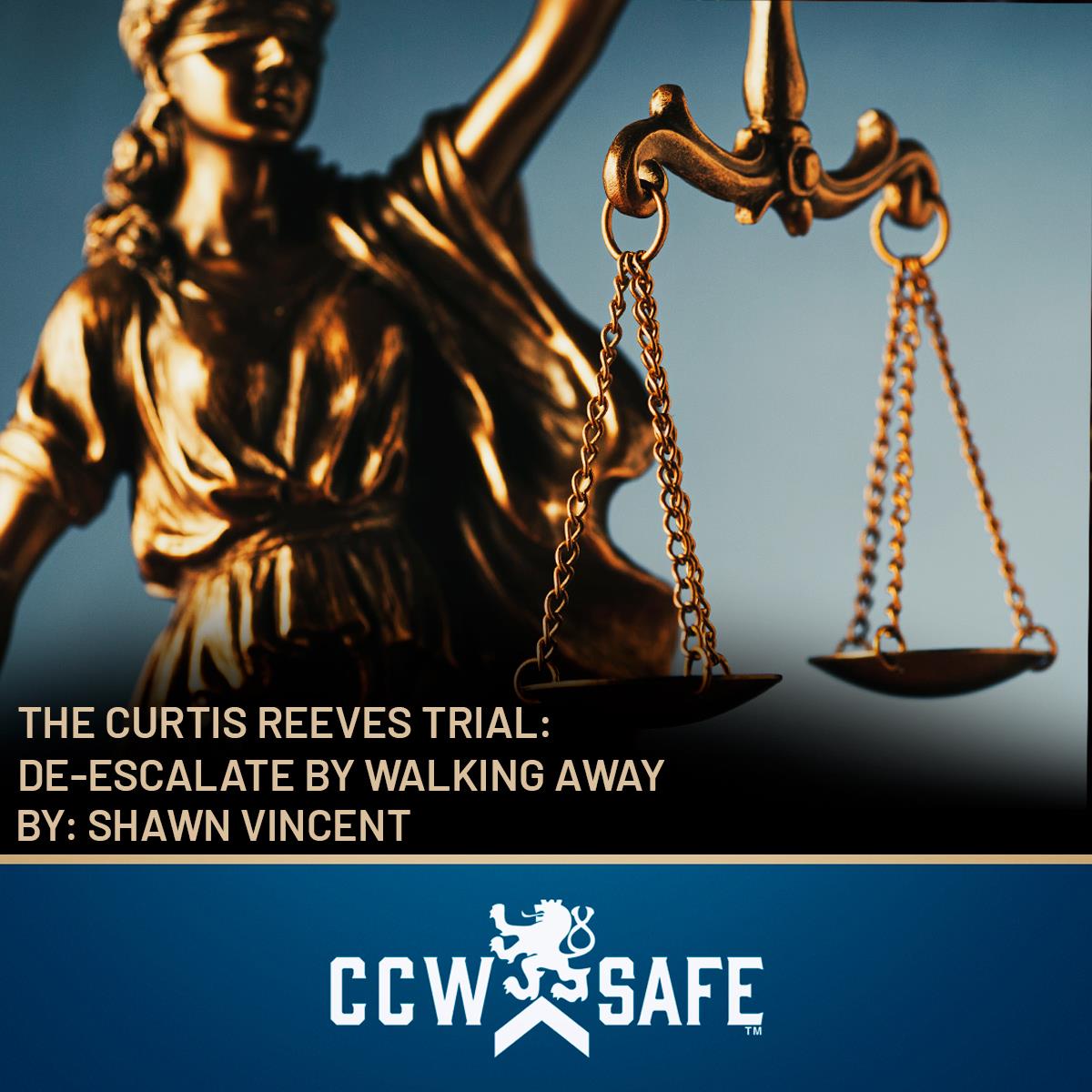 Posted on June 24, 2022 by Grady Epperly in Shawn Vincent

The Curtis Reeves Case: De-Escalate by Walking Away

It can be difficult to know when a verbal confrontation with a stranger might erupt into physical violence. When Curtis Reeves leaned forward to ask the man seated in front of him at a movie theater to put his phone away, he had no idea the confrontation would end with gunfire. Reeves, a retired law enforcement officer with 27 years behind the badge, said he had a lot of experience dealing with loudmouths. “Throughout my career, I’ve dealt with literally thousands of those that didn’t turn violent,” he said, “so I had no reasonable expectation that this one would.”

But it did. Chad Oulson, the man with the cell phone, responded negatively to Reeves’ request. “The ‘F’ word seemed to be his primary vocabulary at that point,” Reeves testified. He decided to report Oulson to management, and by the time he returned to his seat, Ouslon had put his device away. Reeves said, “If I had known you put your phone away, I wouldn’t have involved the manager.”

This statement enraged Oulson, who stood up from his seat and turned to confront Reeves. Oulson was exhibiting “explosive behavior, both verbally and physically,” Reeves said. “He was reaching for me or trying to get over the seat … I couldn’t get up. I was trapped.” Reeves claimed Oulson threw something that struck him in the head – possibly a cell phone. Grainy security video footage shows Oulson grabbing a bucket of popcorn out of Reeves’ lap and throwing it at him. That’s when Reeves drew his pistol and fired a single fatal shot.

In our last article, we discussed how Reeves narrowly escaped a murder conviction for this shooting. Reeves’ calm demeanor in contrast with Oulson’s “explosive behavior” weighed in the defender’s favor, as did the age difference between the 71-year-old and his 43-year-old attacker. While a jury ultimately found the shooting of Chad Oulson justified, the tragedy was completely preventable.

When Reeves decided to report Oulson’s cell phone use to management, Reeves’ wife, Vivian, said, “Let’s just move.” At trial, Vivian testified that they decided not to move because their son was joining them, and they had already told him where they were seated. Don West, criminal defense lawyer and National Trial Counsel for CCW Safe, suggests there was likely more to Reeves’ refusal to move. “In some ways, I have to think he wanted to win this interaction,” Don says. “He wanted Chad Oulson to put his phone away and probably apologize for it. He was smart enough and careful enough to go to the manager, but not smart enough or careful enough to move.” Reeves had no legal obligation to move, but if he and his wife had changed seats, this entire tragedy would almost certainly have been avoided.

Moreover, Reeves chose to re-engage Oulson after he reported him to management by saying, “If I had known you put your phone away, I wouldn’t have involved the manager.” Objectively, the issue had been resolved, and Reeves had nothing to gain by making that statement. At trial, Reeves said, “I think the whole contact I had with him was an attempt at de-escalation.” The truth is that needlessly renewing a conversation with someone who has been verbally confrontational constitutes an escalation – call it a “re-escalation.” Firearms instructor Steve Moses suggests, “Had he just kept his mouth shut, there may have never been a verbal confrontation between the two afterward.”

Don West says, “You can’t control how somebody else responds to you.”  When you approach a stranger, you don’t know what their mental state is, you don’t know their psychological state, and you don’t know if they’re under the influence of drugs or alcohol. When someone is emotionally or psychologically agitated, it’s possible that no amount of verbal interaction is going to calm them down. Don says that sometimes the best thing to do is to “de-escalate by removing yourself from the situation.”

Curtis Reeves shot and killed Chad Oulson in January of 2014, and he didn’t hear the words “not guilty” until February of 2022. Reeves spent time in jail before he was released on bond. He lived for eight years with an ankle monitor on his leg and the specter of life in prison hanging over his head. In the months before trial, Reeves made sure his wife was prepared for life without him, and as they waited for the jury to deliberate, Curtis gave Vivian his wedding ring, anticipating he’d soon be convicted of second-degree murder.

No criminal defendants win a prosecution; they merely survive. Likewise, nobody wins a gunfight because even a justifiable homicide carries significant life-altering consequences. The lesson for concealed carriers is that you cannot predict how strangers will respond when verbally confronted, and any verbal confrontation has the capacity to become violent – which means any verbal confrontation involving a concealed carrier could possibly end with gunfire. If it is true that the only way to win a gunfight is not to have one, then for concealed carriers, the best way to win an argument with a stranger is to simply walk away if you can safely do so.