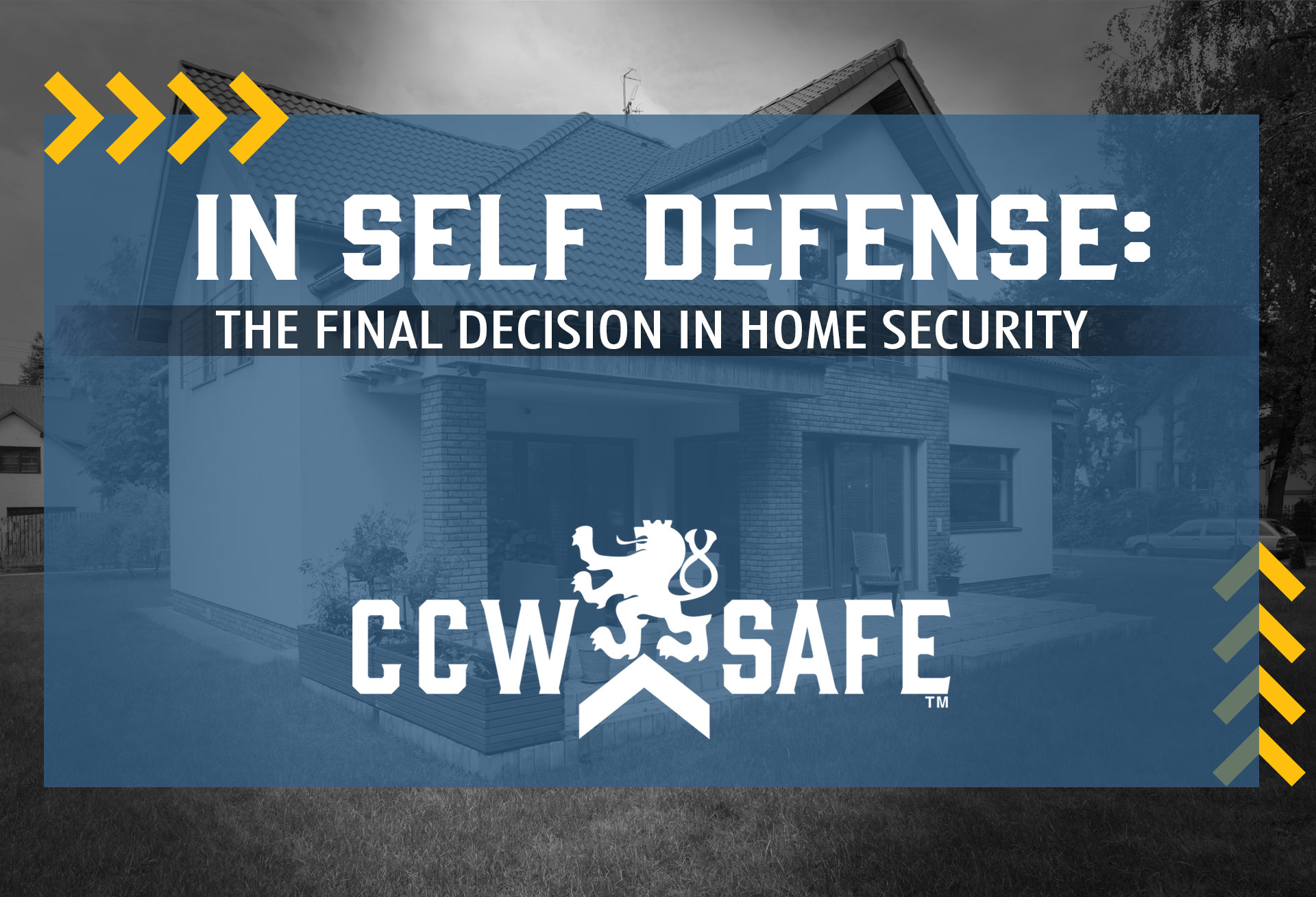 Posted on April 5, 2019 by Shawn Vincent in In Self Defense

The Final Decision in Home Security

The Final Decision in Home Security

Most gun owners keep a weapon for the purpose of home defense. They imagine a nightmare scenario in which an intruder crosses the threshold of their sanctuary with ill intent. They resolve they are willing to meet such a threat with deadly force if necessary. Not all gun owners concerned with home defense, however, make equal investments in other security measures that could deter an intruder or provide alternatives to deadly force.

Don West, National Trial Counsel for CCW Safe and veteran criminal defense attorney, says, “Using your weapon is the final decision to be made in a home defense scenario.” He says an investment of time and money can help you avoid having to make a life-and-death self-defense decision.

Markus Kaarma of Missoula, Montana shot a sixteen-year-old foriegn exchange student who was, most likely, attempting to pilfer beer from the garage refrigerator. Not long before the shooting, Kaarma had been the victim of a more serious burglary where intruders stole his partner’s purse from the garage. A law enforcement officer who lived on the street told her that leaving the door partially open to their darkened garage each night made their home a prime target for a “crime of opportunity.”

At trial, prosecutors made a compelling case that Kaarma intentionally lured a would-be intruder into his garage in an attempt to exact revenge for the previous invasion he suffered. The jury found Kaarma guilty of intentional homicide, the legal equivalent of murder in Montana. He was sentenced to 70 years in prison.

In civil law, there is a concept called “negligent security.” When property owners fail to take reasonable steps to address known criminal threats, they can be held responsible for crimes that occur on their property.  It’s seldom applied against homeowners, but in this case, it can be argued that Kaarma was a victim of his own negligent security.

“Even before he set up the trap,” Don West explains, “they were negligent in doing simple things that would make them less attractive to would be criminals.” Proper lighting and secured doors would have gone a long way to warding off burglars, and such efforts would likely have prevented both the tragedy with the foriegn exchange student and the burglary they suffered previously.

The lesson for the gun owner concerned with home defense is that taking efforts to ensure your home doesn’t look like a “crime of opportunity” can help prevent a deadly self-defense scenario from ever happening in the first place.

You can read a more in-depth analysis of the Markus Kaarma case on the CCW Safe Blog:

Ted Wafer of Dearborne, Michigan awoke at 4:00 a.m. to violent banging on the front door of his home. He grabbed his shotgun and opened the door to investigate.  He had no way of knowing that all the commotion was being caused by a 19-year-old girl named Renisha McBride who was drunk, high, and suffering from head trauma.  She was probably looking for help.  Wafer mistook the dark figure on his porch for an intruder, and he shot her in the head.

Wafer initially told investigators that the shooting was an accident — and it probably was; there is no such thing as “accidental self-defense.” Wafer’s defense lawyer, Cheryl Carpenter, argued passionately at trial and was crestfallen when the jury found her client guilty of second-degree murder. “It was a reaction to the fear he was feeling,” she told a reporter. “I don’t think it’s fair or just that he is now labeled a murderer.” He’s currently serving a 17-year prison sentence.

At trial, it came up that Ted Wafer did not have a security system.  He said he considered buying one, but it was too expensive.  What he could afford, however, was a Mossberg 12 gauge tactical shotgun. Instead of calling the police, Wafer went right for his firearm.  Instead of verbally warning off the intruder, he opened the door to confront her. Had there been adequate lighting on the front porch, Wafer may have recognized that McBride was injured and looking for help.

“People probably wanted to acquit him,” Don West says, “but there are clear stages and steps where better judgement, forethought and planning would have changed this dynamic.”

Ted Wafer’s lesson for the gun owner concerned with home defense is that relying on deadly force without adopting other security measures can lead to deadly mistakes and cost you your freedom.

You can read a more in-depth analysis of the Ted Wafer case on the CCW Safe Blog: https://ccwsafe.com/blog/24735

Byron David Smith of Little Falls, Minnesota shot and killed two teenagers who had shattered a window and broke into his home on Thanksgiving day 2012. At first there was outrage when the Morrison County Sheriff Smith arrested Smith and charged him with first degree murder. The outrage subsided when, at trial, the grizzly details of the homicide became apparent.

Smith, who claims to have been the victim of a robbery before, intentionally parked his car down the street to make it appear that he wasn’t home. He watched on a four-camera security system as the teens cased his home.  Then he waited in his basement for the teens to find him.  When they appeared on the stairs, he shot them in the legs, sending them tumbling to the basement floor where they lay prone and incapacitated. Then he executed them with a deliberate shot to the head.

In many ways, Smith’s case is similar to Marcus Kaarma’s. Both men intentionally made their homes look attractive to would-be burglars in order to exact revenge for previous break-ins. What makes Smith’s case particularly nefarious is he allowed the intruders to cross so many thresholds before he murdered them.  When he saw them on the security monitor, when they broke the window, as they crept down the stairs — at each threshold, Smith could have called police, announced his presence, and declared his intent to defend himself with his weapons.

“You’d know pretty quickly what an intruder’s intention was,” says Don West. “A burglar’s goal is not to have a confrontation. Merely doing something to make it clear that someone is home is going to discourage a burglar.”

Byron David Smith’s lesson to the gun owner concerned with home defense is that every threshold you establish in your home creates an opportunity to ward off intruders and potentially avoid deadly encounters.

The Lesson For Gun Owners Concerned with Home Defense

The lesson for the gun owner concerned with home defense is that your firearm is only one tool available to you, and it should be your absolute last line of defense. As Don West says, it’s the “final decision” in a chain of choices that you can make to deter intruders.  The first choice may be to install proper exterior lighting, and secure your windows and doors. Make every effort to ensure that your home is not a “crime of opportunity.”  Exterior cameras can help assess whether someone is a threat before they attempt to enter your house so you can avoid accidents such as in the Wafer case, and you’ll have time to safely call 911 as Smith should have done. An alarm or verbal warning will let an intruder know they’ve been identified. If they refuse to flee, you’ll be all the more assured that they mean you harm, and an ultimate use of deadly force may be judged to be all the more justified.

If you’ve invested in a firearm for home defense, then you should also make other investments in home security that will deter intruders, and give you more time and more options should someone ever try to forcibly enter your home. If you’re willing to kill someone to protect your family, any other efforts to keep them safe are simple and reasonable by comparison.