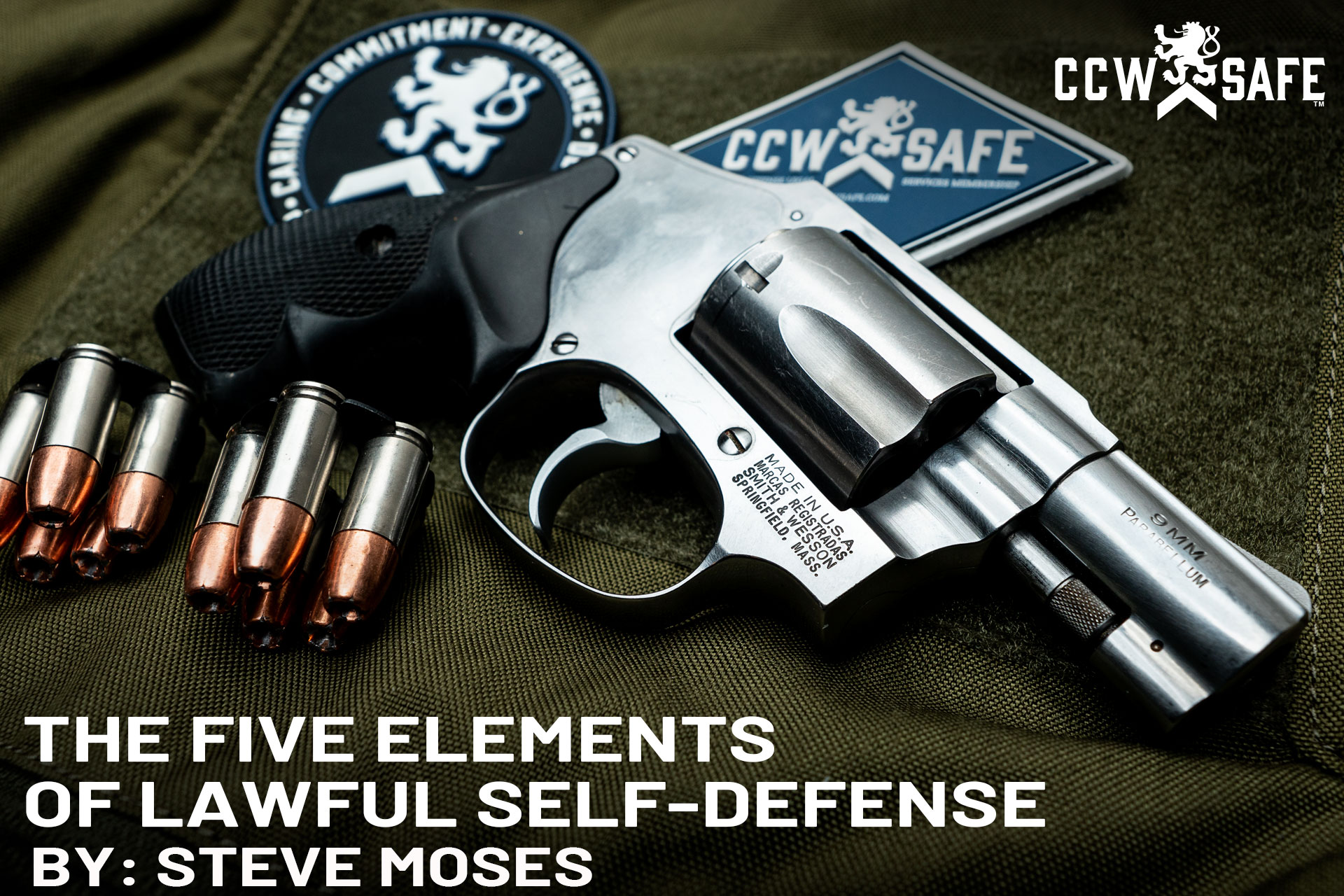 Posted on November 15, 2022 by Justin Collett in Training

THE FIVE ELEMENTS OF LAWFUL SELF-DEFENSE

I recently attended a block of instruction taught by well-known attorney Andrew Branca at the 2022 Annual Rangemaster Conference held at the Dallas Pistol Club in Carrollton, Texas. Andrew is a true subject matter expert when it comes to the topic of self-defense (there are fewer of them than we might think). As a concealed carrier who absolutely wants to avoid shooting another person in self-defense but knows that it  is possibility that he might be forced to, I never miss an opportunity such as this to become better educated when it comes to understanding what it might take to accomplish the following:

Andrew Branca has been practicing law for thirty years with the focus being on self-defense. Andrew is an accredited CLE instructor in more than thirty states. He teaches classes open to the public, provides legal consulting to other attorneys, is the author of several best-selling books, and has produced multiple DVDs.

The principles of self-defense tend to be approximately the same in all fifty states even though terminology and wording may differ. Each state is required to disprove any one of the five elements of self-defense in order to win the case. What this means is that each element is a target, and the prosecution may work hard to find just one element that they can attack. It is not a matter of whether or not the accused threatened, injured, or killed another person as they have already admitted that they did.  However, the accused contends that the action took place because of the direct actions of the other person.  Concealed carriers should be aware that judges sometimes make improper rulings during the trial, and that the win rate for cases that prosecutors take to trial may be as high as 90%. The consequences for unlawfully using a firearm to threaten, harm, or kill another person are harsh. Set out below are some examples:

Concealed carriers should know the five elements of self-defense that are vulnerable to attack and have at least a fundamental understanding of each. Those five elements are:

Innocence: Self-defense is intended to allow an innocent person to defend themselves against an unlawful act of aggression. It is not intended to allow an unlawful act of aggression against an innocent person. Innocence can be lost by initiating the aggression, being the first to threaten to use unlawful force, and engaging in mutual combat. It is important to not act in a manner that might be considered to be mutual combat by third parties whether they are present at the scene or seated in a jury. Concealed carriers should know that is possible to “regain” innocence by making a good faith attempt to withdraw prior to engaging in an act of aggression. The same is true in some states if the concealed carrier unlawfully shoves another and the other person then produces a deadly weapon. I think that concealed carriers need to know that they may be taking on huge risks if they make the decision to confront another person while armed, and if they find themselves on the cusp of mutual combat they need to withdraw immediately and do so in good faith.

Imminence: Imminent danger means that immediate action must be taken in order to avoid being seriously injured, killed, or the victim of certain forcible felonies such as robbery, kidnapping, or sexual assault. In order to qualify as imminent, the attacker must have the ability, opportunity, and intent to commit one or more of the above-described violent criminal acts. I use the word “intent,” but the correct legal term appears to be “jeopardy,” which Andrew described as conduct suggesting that the other party has the immediate intent in addition to ability and opportunity. Imminence is a window that can open and close. Concealed carriers who act before the window opens and after it closes can be prosecuted for having committed an unlawful act.  Concealed carriers may find themselves in what Andrew called the “Zone of Ambiguity” during real-world encounters with a potential threat. I think that concealed carriers might benefit by attending a quality force-on-force training class. We should learn in a training environment how to quickly assess such situations as they are unfolding and become adept at clearly articulating afterwards what took place.

Proportionality: Proportionality refers to the degree of force used in a defensive encounter and focuses upon the amount of force applied by the aggressor against the defender. Deadly force is that force capable of causing death and/or grave bodily injury and typically includes the use of firearms, knives, and other objects depending upon the manner in which they are wielded and ability to cause physical damage. Disparity in size, strength, fighting ability, and numbers can also constitute deadly force. Non-deadly force is a lesser degree of force that might occur in a fistfight between two parties similar in size, strength, and fighting ability where there are no significant disparities between the two. Other examples of Less Lethal force are pepper spray, Tasers, and even a finger poke. When it comes to proportionality, concealed carriers in a fearful state of mind frequently end up in trouble with the law because of a combination of stress and inadequate training results in poor decision making. In addition, not possessing multiple defensive tools may encourage them to resort to the only tool available to them at the time, which often happens to be a firearm.

Avoidance: Concealed carriers should retreat rather than fight not only because it removes this element as one that the state can attack but because it is an action that lessens the chance that they will be injured or killed. Not all states have Stand-Your-Ground laws, and trespassing in one of those states can negate that claim. Castle Doctrine means retreat is not required in most states, but it may or may not apply if the student is a visitor in a Duty-to-Retreat state. I advise my students to always retreat (if possible) regardless of state law.

Obviously, it is not going to be easy to commit to memory everything stated above.  A good start might be having at least a baseline understanding of the elements. Examples are set out below:

A good working knowledge of the elements of lawful self-defense is important. I seriously doubt that if I am ever involved in a defensive shooting that I am going to wish that I had not put in so much time investing in training.  Andrew Branca is a fantastic source of practical legal knowledge for concealed carriers. He has a blog, legal protection plan, and even books on the principles of lawful self-defense that can be found at  www.lawofselfdefense.com.