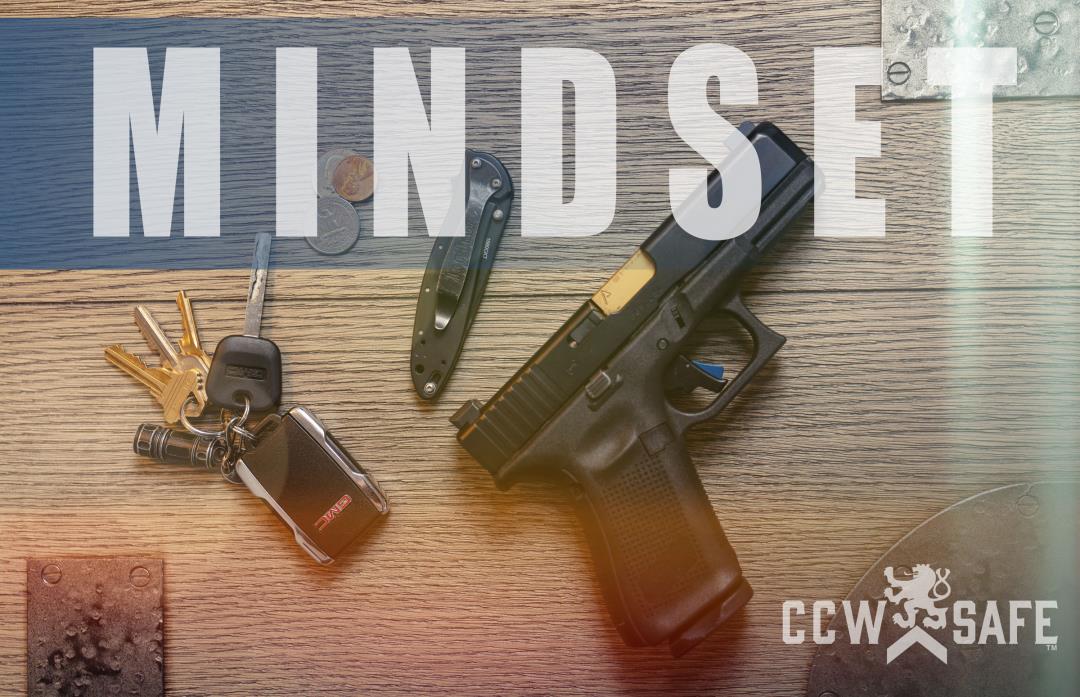 Posted on December 3, 2018 by support@ccwsafe.com in Training

In our series The Four Principles of Concealed Carriers, we’re exploring what I see as the most important principle concealed carriers should adopt to be safe and responsible as they exercise their right to carry.  In this installment we will examine the importance of mindset and a personal example which made me choose it as a core principle.

Years ago when I became a Deputy Sheriff, I was excited to do the job and help people in the community.  Oh, sure, I was having fun putting bad guys in jail, but I didn’t take the potential dangers of the job as seriously as I should have. I have to admit, it was a kinder, gentler atmosphere back in the day, and much more law enforcement friendly. Or so I thought.   That innocence came to an immediate halt on the late afternoon of December 29, 1977, when Reserve Deputy Sheriff George Pfeil walked into a local pharmacy in my patrol zone, in uniform, and unknowingly interrupted a robbery in progress. The 57 year old retired New York City Transit cop who had moved to sleepy, peaceful central Florida was shot and killed in the doorway.  I remember responding from miles away, learning from others who had already arrived at the scene, that he was dead.

I was shaken, not sure how I would have reacted to a similar situation.  I had to face up to the shock and  violence of a cop being killed, unfortunately the first of many in my career. I immediately knew I didn’t have the right mindset for what had happened, and I found that I needed to make a decision as to whether I was prepared to continue in the field or do something else.

Soon after George’s murder, I spoke with our department firearms instructor.  We had a long talk about tactical training and I told him how shaken I was with the events of George’s murder.  It had occurred in my patrol zone and I had never experienced that level of violence to a law enforcement officer before. The instructor told me I had the “it can’t happen to me” mindset.

For me, that began a commitment of working on my personal mindset and training, becoming educated and making myself the safest deputy I could be. I decided as I trained that if I was going to survive and succeed, I had to develop a strong personal understanding and commitment that in any given situation, I was going to go home at the end of my shift and make sure those around me could count on me to get them home too.  It was something that would become known in some circles as the Warrior Mindset. I joined the department’s combat pistol team and qualified for and was accepted to SWAT.  Since that time many books and training sessions have come and gone and circled back around again, addressing the Warrior Mindset and what that entails for each individual. And make no mistake, it IS an individual thing.

As in my personal example, where I obviously did not have the proper mindset when I hit the streets at the beginning of my career, the concealed carrier needs to know what his or her personal mindset is toward use of deadly force.  Let’s be frank.  The reason you carry is for personal and family protection, and nothing less. In that vein, you MUST have the understanding that the only reason to draw the weapon and use deadly force is in the most dire of personal circumstances or in the absolute last ditch defense of others.  To have a permit and not have the mindset that you will use the weapon appropriately is useless, possibly illegal, and worse, dangerous.

In my conversations with those folks in the social settings I discussed earlier, one of the first questions I ask is “will you use the weapon to eliminate the threat to yourself or others in immediate life-threatening jeopardy?” In other words, ARE YOU WILLING TO TAKE A LIFE TO SAVE A LIFE? If their answer is no or if they equivocate in any way, I suggest that they not get a permit.  I explain the concept of the warrior mindset and how they must be ready to take a life to save a life and to survive a deadly encounter by use of violent force. Of course, the response is often something like ”I could fire a warning shot” or “I’ll draw the weapon and scare the bad guy away”. Those folks don’t get it.  They have no idea of the ramifications of firing a warning shot, or how easily and quickly a committed assailant can disarm you while you are trying to scare him away. Most Americans today have never been in a real fight, let alone had to fight for their lives.

For those who are on the fence, who want to learn the warrior mindset and develop it, I often tell them to read any of the great books out there, and Lt. Col. Grossman’s “On Killing” is a personal favorite.  Google is your friend though, and you can look for any number of books and publications to help develop the mindset. There are also numerous personal training sessions for this. The more you understand about self defense, and more importantly, your own ability to use deadly force, the more prepared you will be to make your commitment.

Make no mistake, I am not espousing that everyone in the general public is a threat.  But ANYONE in the public can be a threat. We have seen young teenagers in active shooter roles. Are you prepared to use deadly force on the 15 year old on a killing spree through your grocery store on a Saturday afternoon? How about a mentally disturbed older person? Yeah, that 75 year old guy looked harmless enough until he started popping off rounds across the mall parking lot. Recently a woman shot several people before killing herself at a warehouse in Maryland. Movie theatre shootings. You get the picture. The mentally disturbed don’t wear a sign around their neck. They walk among us and for the most part we are unaware.

These are difficult situations in everyday life that you may find yourself in the midst of.  I made the commitment a long time ago to deal with them in any way needed to eliminate the threat to myself or others. If it means deadly force, I can do that. Deadly force may be using my motor vehicle as a weapon or a frozen piece of meat over the bad guy’s head, but it is no less a commitment to eliminate a threat to myself or others. There is a video on Youtube of a Sheriff’s Office Captain throwing cans of vegetables at a grocery store assailant. Apparently, he didn’t feel using his firearm was appropriate in the environment he was in.

Until one develops the warrior mindset, the understanding that the only reason to carry concealed is for last-resort personal protection when use of deadly force is a real and necessary option, you shouldn’t carry. Concealed carry isn’t for everyone, and no one should feel compelled to carry if they aren’t prepared to make the COMMITMENT to carry.

Remember, the concealed carry COMMITMENT is a pledge to yourself and to those around you that should revolve around these four core principles.  In our next instalment we’ll examine the principle of  EDUCATION and why it is important for concealed carriers to adopt to prepare themselves for the worst-case scenario.