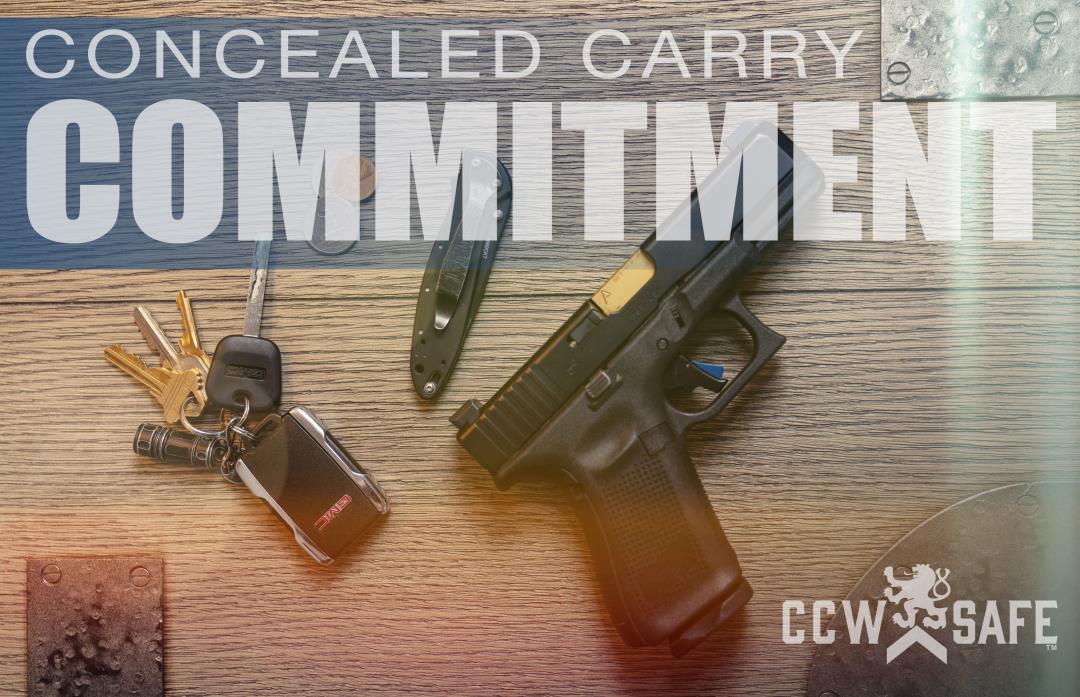 Posted on November 26, 2018 by support@ccwsafe.com in Training

The concealed carry commitment is a pledge to yourself and those around you to be a responsible carrier of your firearm.

I believe that commitment for concealed carriers can be broken down into four principles, which include mindset, education, training and judgment.

In future posts, I will offer readers more details about how I view these principles. But first, I want to discuss what this serious commitment means to me.

Over the past several years, when people discover I’m a career investigator and firearms instructor, the conversation inevitably turns to concealed carry. I enjoy talking about people’s reasons to carry. But I’ve become frustrated and concerned about the lack of understanding – even among concealed carry permit holders – of the responsibilities that come with this carrying privilege.

Let me be clear. I know I’m writing for an audience that carries concealed (and in some states, open). You already have a concealed carry license, if required, for your state of residence. Nonetheless, it’s good to review the circumstances under which you carry. Always be aware of why you carry in the first place, which puts you in a position to wisely advise anyone who asks you about the reasons why concealed carry is good.

The first question I often get is something like, “I’m thinking about getting my CCW permit. Should I?” My typical reply is, “If you have to ask me, you haven’t decided to be a responsible concealed carry permit holder yet. And you’re not ready for concealed carry.” So much goes into the decision to carry concealed for the rightreasons. I tell people it’s not just a decision to carry, it’s a commitment to carry. I can’t emphasize this commitment enough.

Why Do We Carry Concealed?

Let’s get back to the basics, shall we? Why do we carry concealed in the first place? And what are the essential elements for concealed carry? Concealed carry goes beyond mere gun ownership. There are aspects of concealed carry that need to be addressed beyond the hunter’s needs, or the competitive shooting sportsman, or the gun collector.

I focused on why concealed carry is good for me. These reasons are wide-reaching, including why I stayed in the same career for 40 years, and why I became a law enforcement firearms instructor. I thought about dozens of LEO-involved shooting investigations I’ve participated in over the years, and how those officers acted and reacted. I examined my use of force in 1991. I looked at investigations of civilian use of force I’d conducted, and why I even carry at all.

After serious reflection, I determined that concealed carry is a commitment. Now, sometimes I’m old school. I went back to my dog-eared Webster’s Dictionary, which I carried in my patrol car or had on my desk for over 40 years. Webster’s has a simple definition of commitment, which is, “To bind, as by a promise. To pledge.”

We pledge to love, honor and stay committed to one another. We pledge allegiance to the flag. To live up to the laws, morals and values of a nation. The word pledge carries a lot of weight.

Concealed carry, as we’ll discuss in this series, involves more than merely deciding to carry or meeting your state’s carry requirements. A state’s permit process won’t teach you the subtleties behind the type of mindset you need to carry safely or make sound use of force decisions. The licensing vendor won’t instruct you about differing gun laws in places you want to travel to. And in some cases, the vendor may not even address your state’s use of force and self-defense gun laws.

We will cover these principles in future installments.

If you’re not familiar with these principles, I hope this series will make you think about why you carry and how you behave when armed.

When you carry concealed, you’ve made a social compact to do so safely and responsibly, to stay trained and educated, and to be the best ambassador you can for the concealed carry community.

In our next installment, we’ll examine mindset, and why concealed carriers need to prepare for worst-case scenarios.