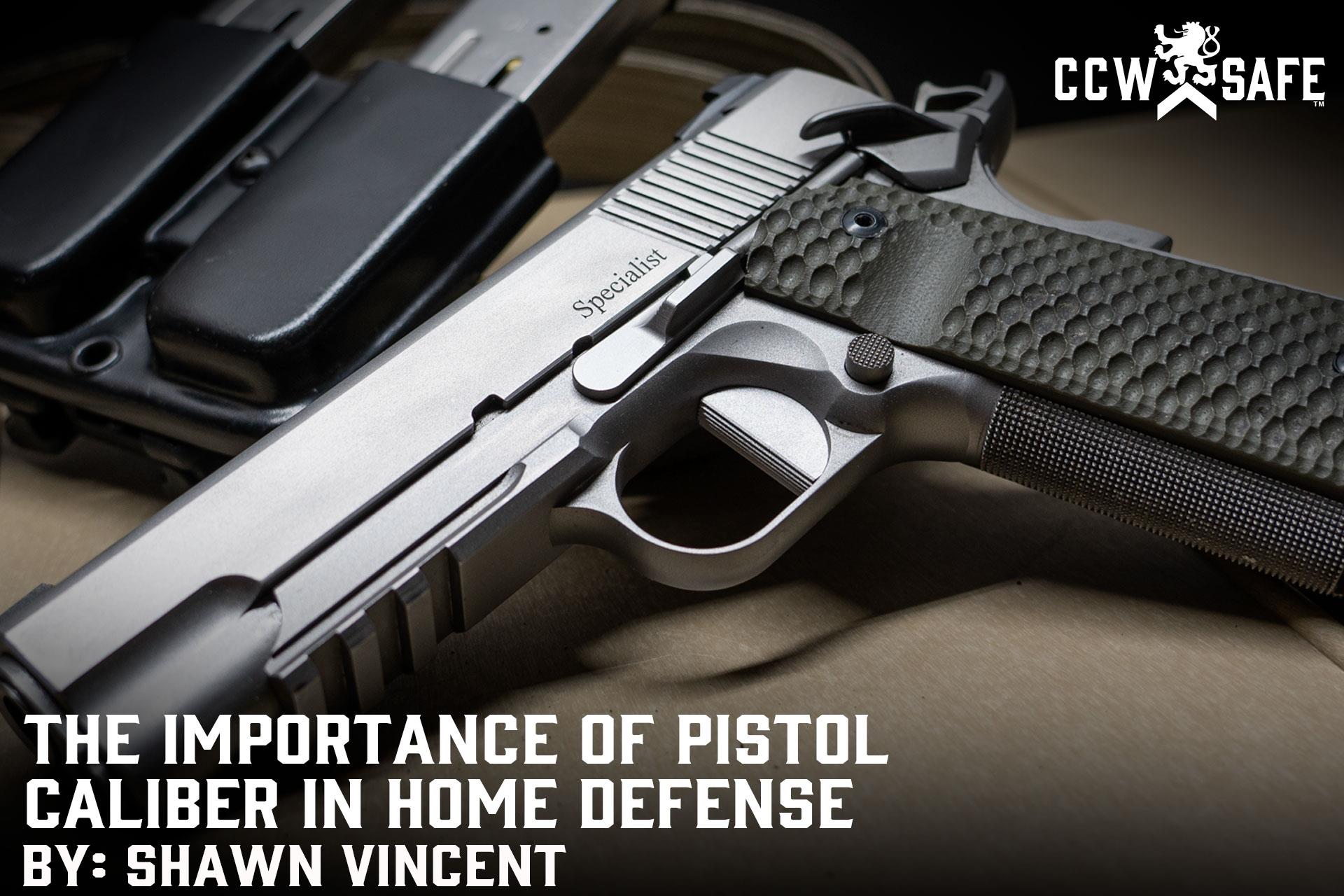 Posted on April 22, 2022 by Shawn Vincent in In Self Defense

The Importance of Pistol Caliber in Home Defense

When it comes to the stopping power of a firearm, the general wisdom is “bigger is better,” and this is absolutely true when the goal is to incapacitate an attacker. Firearms instructor Claude Werner says that, for law enforcement, the ability to incapacitate an assailant is important: “They have to render the assailant immediately powerless and unable to escape because they have to get the bracelets on a criminal that they’ve just justifiably shot.” For a home defender, however, the goal of self-defense is not to incapacitate or capture a criminal; it is to break contact with an attacker. “In the case of an armed citizen, if you shoot the criminal, and he runs away and the attack is ended,” Claude says, “that’s good enough.”

When it comes to breaking contact with an attacker, Claude says small-caliber pistols are often “good enough.” Years ago, Claude conducted a statistical analysis of five years’ worth of self-defense cases that were reported in the NRA’s “Armed Citizen” column. In nearly a third of the home intruder cases he explored, the intruders fled upon being discovered or when confronted by a willing armed defender. Of the cases where defenders shot the intruders, just over half proved fatal, and for the other half, Claude writes, “With few exceptions, criminals ceased their advances immediately upon being shot.”

Firearms instructor and CCW Safe contributor Steve Moses explains that being shot has both psychological and physiological effects. Half the intruders in Claude’s study “expired” upon being shot, and that means the defender physically stopped them with the bullets. The remainder who “ceased their advances immediately upon being shot” were psychologically stopped by the defender’s bullets, meaning they were physically able to continue an attack, but being shot provided the proper psychological motivation to go find something else to do.

Perhaps surprisingly, Claude reports, “Even small-caliber handguns displayed a significant degree of instant lethality (30 percent immediate one-shot kills) when employed at close range.” Claude defines small-caliber as “anything that’s a .380 or less.” The reason these “mouse guns” are so effective, Claude suggests, is because, at close range, home defenders are pretty good at hitting the intruders center mass – in the thoracic cavity above the diaphragm where even small caliber bullets can be highly lethal. For the 70% of intruders not immediately killed by a small-caliber bullet, they seem, by in large, motivated to retreat upon being struck by a round or two from a “mouse gun.”

That’s not to say that all intruders will be deterred by a non-fatal shot from a small-caliber weapon, and Claude notes that people who face known enemies (such as abusive ex-domestic partners) may need a firearm capable of causing a physical deterrent sufficient to end an attack. Such a defender likely knows about this possibility, and they can arm themselves accordingly. Steve Moses says, “If indeed you are up against that crazy person, the psychopath that is willing to fight to the very end in order to kill you, something in the larger caliber is definitely probably going to be more effective in shutting the threat down sooner. There are circumstances where a larger caliber gun may indeed be what you need to defend yourself, but those instances are not as common as many people think.”

Steve reminds us, however, that statistics are cold comfort if you are the outlier.

Not long ago, we explored the case of Melinda Herman, an Atlanta-area mother who defended herself and her twins against an intruder who busted through her front door. Melinda grabbed a revolver and retreated to a crawlspace with her kids. The intruder tracked her down, and Herman unloaded her pistol, striking the criminal five times in the face and neck. None of the bullet wounds proved fatal, but consistent with Claude’s research, the attacker pleaded with the defender to stop shooting, and the use of force proved effective in psychologically breaking contact with the intruder who fled the house and crashed his van into a tree in a nearby neighborhood.

Firearms instructor Tatiana Whitlock notes that a larger caliber pistol with a capacity for more rounds would have provided Herman with more opportunities to protect herself and her children, but notwithstanding, Herman achieved what Claude calls a “positive outcome.” The small-caliber pistol was significantly better than having no pistol at all.

Claude says, “Ultimately, the bigger and better your gun is, the better off you are. Fortunately, those cases are exceedingly rare, and I would say, generally to a certain extent, predictable.” A bigger caliber gun with a larger capacity will be more effective in physically stopping a highly motivated intruder, but in most cases, a round or two from a “mouse gun” can be surprisingly lethal and prove very effective at convincing intruders who survive a shot or two to run for their lives. The lesson for armed defenders is that small-caliber firearms are statistically nearly as good as large caliber weapons for thwarting home intruders. Because no one wants to be a statistical anomaly in this circumstance, bigger is better, but what’s clear from Claude’s study is that being comfortable and accurate with your weapon contributes far more to achieving a “positive outcome” than the caliber of the bullets you fire.