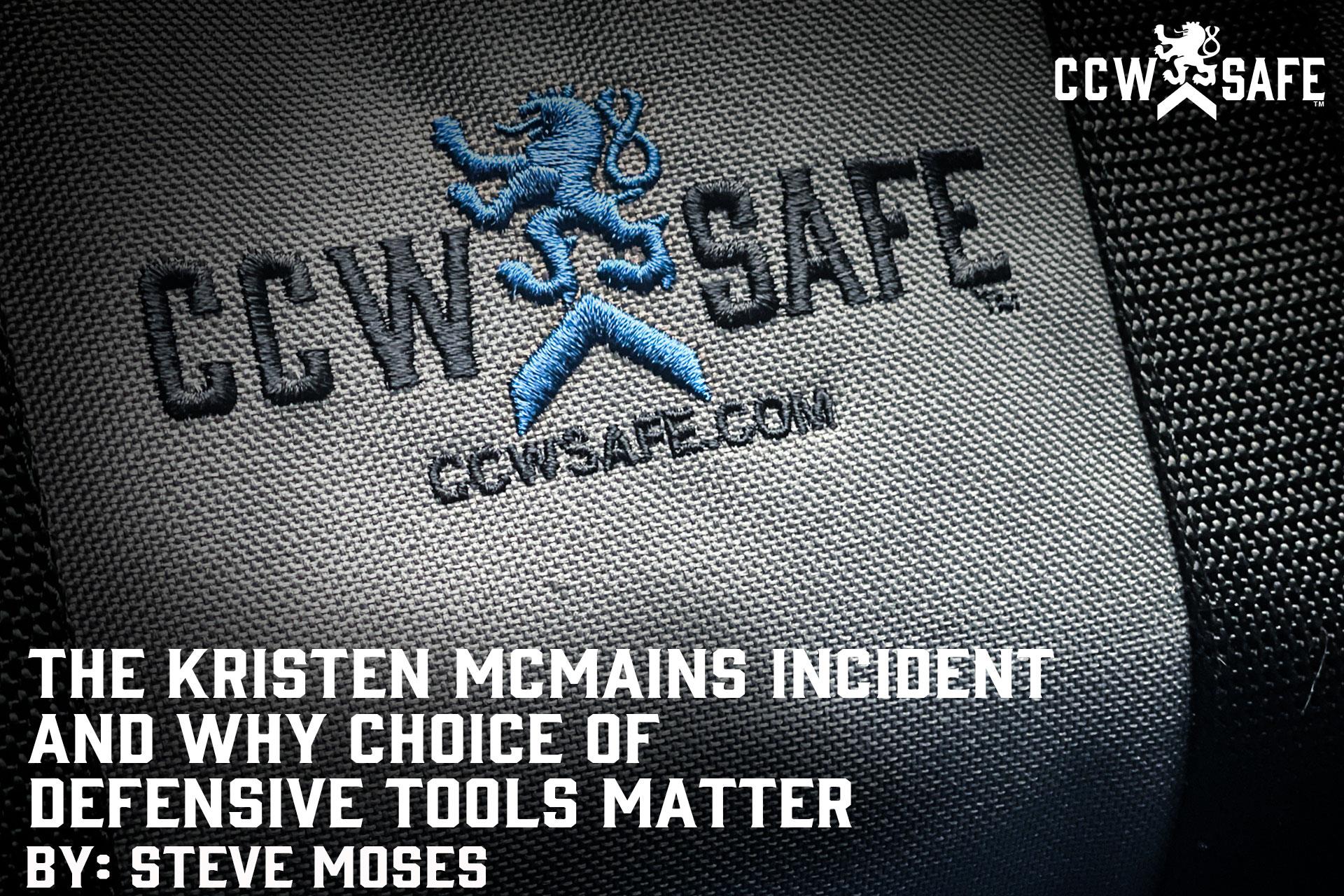 Posted on August 9, 2021 by Steven Moses in Training

THE KRISTEN MCMAINS INCIDENT AND WHY CHOICE OF DEFENSIVE TOOLS MATTER

Litigation consultant Shawn Vincent recently wrote a three-part CCW Safe article on the horrific assault visited upon Kristen McMains, a 25-year-old attorney in Louisville, Kentucky by a certain John Ganobcik. McMains said that she was concerned that Ganobcik was stalking her during her walk through a skywalk that connected the parking garage in which her car was parked across the street. Her concerns heightened when he boarded the same elevator in which she had entered but did not press a button. When the door opened she immediately ran in an attempt to get to her parked car. She was not successful.

Ganobcik caught up with 5’3” McMains just as she got to the car. He quickly overpowered her, stabbed at her abdomen with a knife that she described being both rusty and serrated which he then held to her face, and forced her into her car. He hit her in the face and shoved her over the console into the passenger seat. The attack was so violent that she had all ten of her fingernails ripped off.

McMains was not out of the fight. She told him that she had just cashed a check, reached for her purse, and instead produced a Beretta Tomcat .32 ACP pistol. One can imagine the horror she must have experienced when it initially failed to fire knowing that her attacker was literally seated next to her.

Rather than concede, McMains continued to fight. At some point she was able to shoot Ganobcik in both the throat and buttocks, the effect of which saved her life.

I am a big fan of Kristen McMains. She demonstrated an incredible MINDSET, and never gave up even when the odds that she would not survive another day appeared to be in her attacker’s favor. She used TACTICS to create an opening by convincing Ganobcik that she had cash in her purse and by reaching for her purse in such a manner that it did not cause him initial alarm.

In addition to training under a qualified defensive firearms instructor and gaining additional SKILLS, what else could a person in her position do in order to, as attorney Andrew Branca might say, make themselves “hard to kill and hard to convict?”

Actually, this is the easiest part. Quality TOOLS are the fourth layer of what some firearm trainers refer to as the Survival Pyramid. I first heard of the Survival Pyramid (called “Combat Pyramid at the time) in 1993 during my first defensive handgun course under Texas Pistol Academy owner and instructor Robert Duhon. Since then I have heard it described in different ways and called different things, but Duhon’s description of it has resonated with me pretty much unchanged to this day. Could better tools have made a material difference in what happened to McMains on that day Ganobcik made the decision that this was possibly going to be the last day of her life?

I carry a Hideaway Straight single-edged fixed blade knife in a neck sheath, and on my waistline I carry a Ban Tang Pikal fixed blade knife, a Glock 19, Glock 48, or S&W 442 revolver in a kydex appendix holster, and a spare magazine in a kydex pouch (unless I am carrying the 442, at which time I pocket carry a SpeedStrip with five spare rounds) on an EDC Foundation belt.  I almost always carry a small POM pepper spray cannister in my right front pocket, and I always carry a SWAT-T tourniquet in one rear pocket and a vented chest seal taped to a package of QuikClot hemostatic gauze in the other. While this sounds like a lot of gear, it actually carries very well since most of it is lightweight, compact, and distributed over different parts of my body.

Why two knives? The Hideaway knife plays double duty. I use it as a utility knife to open boxes and envelopes, cut strings, and play much of the same role as a small pocketknife. It becomes my main knife on the rare occasions that I wear a sport coat or suit and tie. I think that this would make a terrific knife for those women that want to carry a small defensive knife but have concerns about to how to dress around it. Hideaway Knives markets a “Bra Clip” designed to affix the sheath to the strap between the two bra cups.  The belt-worn Ban Tang Pikal plays one role only, and that is self-defense. The knife itself is flat and the sheath is designed to position the handle slightly lower than the blade. This means that the knife can be readily accessed from under a closed garment even while seated. Most pikal-style knifes have the top edge sharpened instead of the bottom (double-edged pikal knives are the exception). The advantage of having the top edge sharpened is that the knife is used in a pulling motion instead of a pushing motion. Pulling is almost always stronger than pushing. In a life-and-death struggle at bad breath distance with a stronger or otherwise more physical attacker, I want to avoid extending my hands and arms where they can be grabbed or otherwise trapped.  Rather than trying to further justify why this type of knife is my choice, I would urge readers to check the Trigger Time YouTube video featuring Craig Douglas in which he details why a fixed blade knife is part of his Every Day Carry tools. I am aware that there may be places in which the fixed blade knife is either not lawful or difficult to dress around, as well as the fact that some concealed carriers prefer folding knives instead. Concealed carriers should simply be aware that in some situations additional time or space might be necessary in order to access and/or open them.

Without being a complete Monday morning quarterback, how might the tools that I described above have been useful if I were in Kristen’s place (assuming that the person stalking me was also an individual larger and stronger than I am)?

Skywalk:  If I thought that I was being stalked in a skywalk, I could grasp the pepper spray cannister, position it in my hand so that it is ready to be deployed, and suddenly mumble something like “idiot, you forgot that file” and suddenly turn around while covertly removing the cannister from my pocket, reversing direction, and making sure that I swung wide of the person that I thought was stalking me. If the person took the slightest action to cut me off I could say “stay back” loudly and point the cannister nozzle in their direction. If he is not dissuaded by that, then it is probably time for me to “paint him orange” and make a break for a place where I can get behind a locked door or at least to a position that is more defensible and call 911. Granted, tactics are in play here, but they are less likely to be successful without the proper tools.

Elevator: The suspicious person got into the elevator with me and I am trapped. Many people will either turn their back or look away. The problem is that this response may be exactly what the other person wants, and if my back or side is facing them I am at a disadvantage. I need to face them (square my hips to them) so that the only way they can approach me is head on. Doing so does multiple things, including allowing me to keep an eye on the potential threat, lowering my base (dropping my weight), and bringing both of my weapon delivery systems (arms and hands) to bear. All of my carry handguns are chambered in calibers significantly more powered than .32 ACP, none of them have small manual safeties like the Beretta Tomcat does, and all of them work.  As a concealed carrier who is reasonably skilled at grappling as well as retention shooting I can go to the handgun or to my Ban Tang pikal knife carried on the centerline if attacked. Something I have to consider is that carrying a concealed handgun might not always be an option, which would then make my pikal my primary defensive tool.

The Door of the Car: I think this scenario is similar to the Elevator scenario, with the exception being that it may be possible to break contact easier here than it would be in the Elevator. I would be reluctant to using Pepper Spray in any entangled situation, and this one is no different.

Inside the Car: I feel confident stating that if I am involved in an entangled fight with a person in the front seat of a vehicle I can get probably my pikal knife out easier, into play more safely, and perhaps even use it more effectively than I can my handgun. My concern is not with which weapon might cause the most damage, but with selecting the tool that will force a break in contact the soonest. That break can come when I can withdraw, he chooses to withdraw, or he can no longer continue what he was doing. Could the smaller Hideaway knife accomplish the same thing? I know for a fact that I were facing a smaller, weaker opponent who was fueled by firm determination armed with one that the likelihood of extreme amount of damage to my hands, forearms, and possibly face would immediately make me re-think about the wisdom of some of my life choices.

Other Tools:  There are better tourniquets than the SWAT-T tourniquet in my opinion. It lacks a windlass and is difficult to apply one-handed. Its value lies largely in the fact that it is easily carried in a back pocket, will likely work okay in an environment in which emergency medical care is easier to access than on a battlefield, and in conjunction with the QuikClot gauze or even an article of clothing can act as a pressure dressing.  The QuikClot gauze can also be stuffed into penetrating wounds in the groin and armpits. The vented chest seal can be placed over a penetrating wound to the torso. None of these items take up much space (I have them on my person as I type). All of them are likely far better than something that can be improvised on the spot.

I wrote this article much in the first person for the simple reason that my choices of tools are subjective. I am aware that some of my statements might sound like something an “internet commando” may say. I will simply close by saying that it is a commonly accepted belief that any project that requires tools can best be performed with tools that are well-suited for the task at hand and that function properly. I think the same is true when the task at hand might be saving my own life.