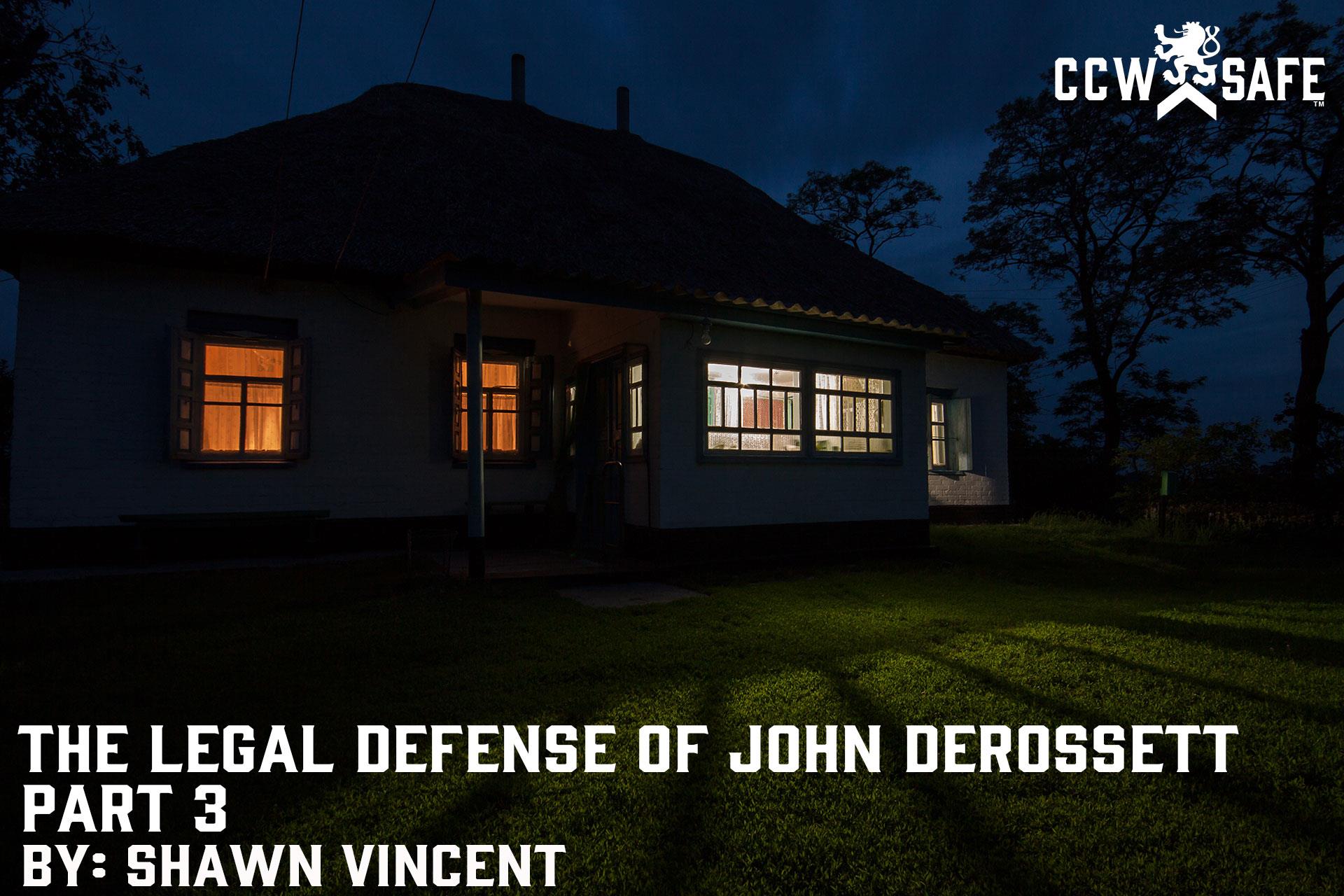 Posted on February 25, 2022 by Shawn Vincent in In Self Defense

John DeRossett’s family begged him to allow his wayward niece, Mary, to stay with him. A recently retired General Motors mechanic, John had rented a nice house in a quiet neighborhood in Brevard County, Florida – not too far from Cocoa Beach and Kennedy Space Center. When Mary, an opioid addict, had fallen on particularly hard times and needed a place to live, John reluctantly agreed to take her in. At some point, Mary resorted to prostitution to fund her addiction, although John didn’t know the extent of her activities.

On the night of August 20, 2015, a plain-clothed sheriff’s deputy on his fourth day as an undercover officer came to DeRossett’s house pretending to be a “John” with the intent of effecting an out-of-policy unwarranted arrest of Mary for the second-degree misdemeanor of soliciting prostitution. When Mary opened the door to her would-be client, the rookie deputy grabbed her without identifying himself as an officer of the law and dragged her into the darkened, poorly-lit front lawn.

Thinking that she was being kidnapped by sex traffickers, Mary screamed for John to help. John grabbed his .40 caliber Glock, marched through his living room, and emerged from the front door to witness Mary struggling on the ground with two other figures who appeared only as shadows in the darkness. With no way of knowing the men grappling with his niece were law enforcement officers, John fired a warning shot hoping to ward off the attackers. A firefight ensued. John incurred two non-fatal gunshot wounds, and he critically injured one of the deputies.

Firearms instructor Steve Moses was once part of a Special Response Team that served high-risk Writs of Possession to dangerous persons and also participated in multiple misdemeanor arrests with another deputy while working in plainclothes. He says law enforcement officers who effect high-risk arrests out of uniform should be trained to clearly identify themselves upon making contact with the subject. In the DeRossett case,  none of the officers properly identified themselves.

John ultimately faced three charges of attempted first-degree murder of law enforcement officers. If convicted, he would spend the rest of his life behind bars. The Brevard County Sheriff held a press conference labeling John a pimp and wanna-be cop killer.  A young lawyer named Michael Panella took on John’s legal defense. No stranger to high-profile self-defense cases, Michael had served as a law clerk for the legal defense of George Zimmerman – a case that was co-counseled by Don West who now serves as National Trial Counsel for CCW Safe. I met Michael and Don on the Zimmerman case, and when Michael called us and asked for our help on the DeRossett case, we found it hard to resist. When we agreed to help, we couldn’t have predicted that the legal defense would take almost four years. It’s important to note that John DeRossett was not a CCW Safe member, and Don and I participated in his defense in our own independent capacities.  After John’s exoneration, he gave us all permission to candidly discuss his case publicly so that his ordeal could provide lessons to other armed defenders.

One of the key lessons from the DeRossett case is that a criminal prosecution affects more than just the defender; it impacts all the defender’s friends and family. Michael Panella says, “In a self-defense case, you’re talking about incredible resources that go into the legal defense. It’s a financial strain. It’s a strain on your spouse, on  your kids, on everybody – not to mention you, and you might be sitting in jail while waiting because you can’t afford your bail.”

John DeRossett couldn’t afford his bail, and he spent most of the four years leading up to his exoneration sitting in jail. Any bond granted in a case that involves homicide or attempted homicide is likely to be expensive  – if it is even granted at all. The judge set John’s bond at $450,000. With Michael’s help, John found a bondsman who was willing to stake him, but it came at a cost. John had to reach out to everyone in his personal network, all his close friends and family, and ask them to put their own property up for collateral. It’s a big ask. Don West says, “They not only have to be willing to do it and have the ability to do it, but they have to be willing to assume the risk and trust that you won’t violate the terms of the bond.”

Luckily, John found the support he needed to provide collateral for his nearly half-million-dollar bond, but he still had to come up with the bondsman’s $45,000 10% fee. John didn’t have it, but the bondsman offered him the unusual opportunity of allowing John to make monthly payments. Unfortunately, as an accused cop-killer in a high-profile case, John lost his part-time job and was unable to find anyone willing to hire him. Michael says, “About a year and a half into this case, he just couldn’t afford to make the payments, and the bail bondsman, staring down the barrel of $450,000 that he’d be on the hook for if something goes wrong said, ‘I’m sorry, John, but I’m going to take you ‘off bond’ because you haven’t been making your payments.’ So John had to go back to jail, even though he had a bond in his case because he simply couldn’t afford the payments.”

Posting bond is just the first expense for a defendant in the criminal justice system. Funding the defense is an entirely different prospect. In John’s legal defense, Michael conducted nearly 30 depositions, examined nearly 100 pieces of evidence, wrote hundreds of pages of legal motions, and reviewed thousands of pages of documents. Michael, Don, and I participated in a week-long self-defense immunity hearing, which required hundreds of hours of preparation by the lawyers, and there was a complicated appellate process that required hundreds of hours more. Michael says, “A lot of people don’t realize how much is involved. ‘I was acting in self-defense. The guy was attacking me, and I shot him and we’re done right?’ But, thousands and thousands of pages of legal documents, and hours upon hours of audio and interviews over nearly four years … that’s the magnitude of the effort.”

Michael worked for a very nominal fee considering the scale of the legal defense, and Don and I worked out of devotion to our mutual friend – and because we believed John was being wrongfully prosecuted to cover up a badly botched law enforcement raid. Had John paid full-price for his legal defense, it would have easily been hundreds upon hundreds of thousands of dollars.

There can be other personal sacrifices during a criminal prosecution as well. Not long after the events of August 20, 2015, Mary moved out of state, leaving behind some outstanding warrants related to minor crimes associated with her opioid addiction and prostitution. Mary’s testimony was essential during John’s self-defense immunity hearing, but Michael says that in order to appear, Mary had to “come from another state where she otherwise wouldn’t have been facing any sort of prosecution.”

Don says, “She had more spine and more integrity than a whole lot of witnesses I’ve seen testify solely because she showed up knowing that when she testified to tell the truth about what her uncle had gone through, what she had gone through, she knew that before the day was over, she would be handcuffed and taken to jail.” Sure enough, as soon as she completed her powerful testimony, deputies took her into custody right there in the courtroom. Mary’s case is an extreme example, but it’s not uncommon for the friends and family of criminal defendants to pay a personal cost for standing up for them.

The lesson for concealed carriers and armed defenders is that even justified shootings can have extraordinary personal consequences for an entire family. Ultimately, John was completely exonerated. The appellate court ruled, in practical terms, that John should not have been prosecuted, and the State Attorney had to drop the charges. However, no one can give John back the nearly three years he spent in jail. No one can give back his retirement. No one can repay the sacrifice John’s family made to support his legal defense. John’s extraordinary shootout lasted less than a minute. If John could go back and make a different decision, such as calling out “Who goes there!” instead of firing his weapon, he would.  As an armed defender, anything you can safely do to de-escalate or avoid a self-defense scenario could save you from the painful consequences. There are no winners in a self-defense scenario, and an exoneration or an acquittal is not a victory, but merely a consolation prize.