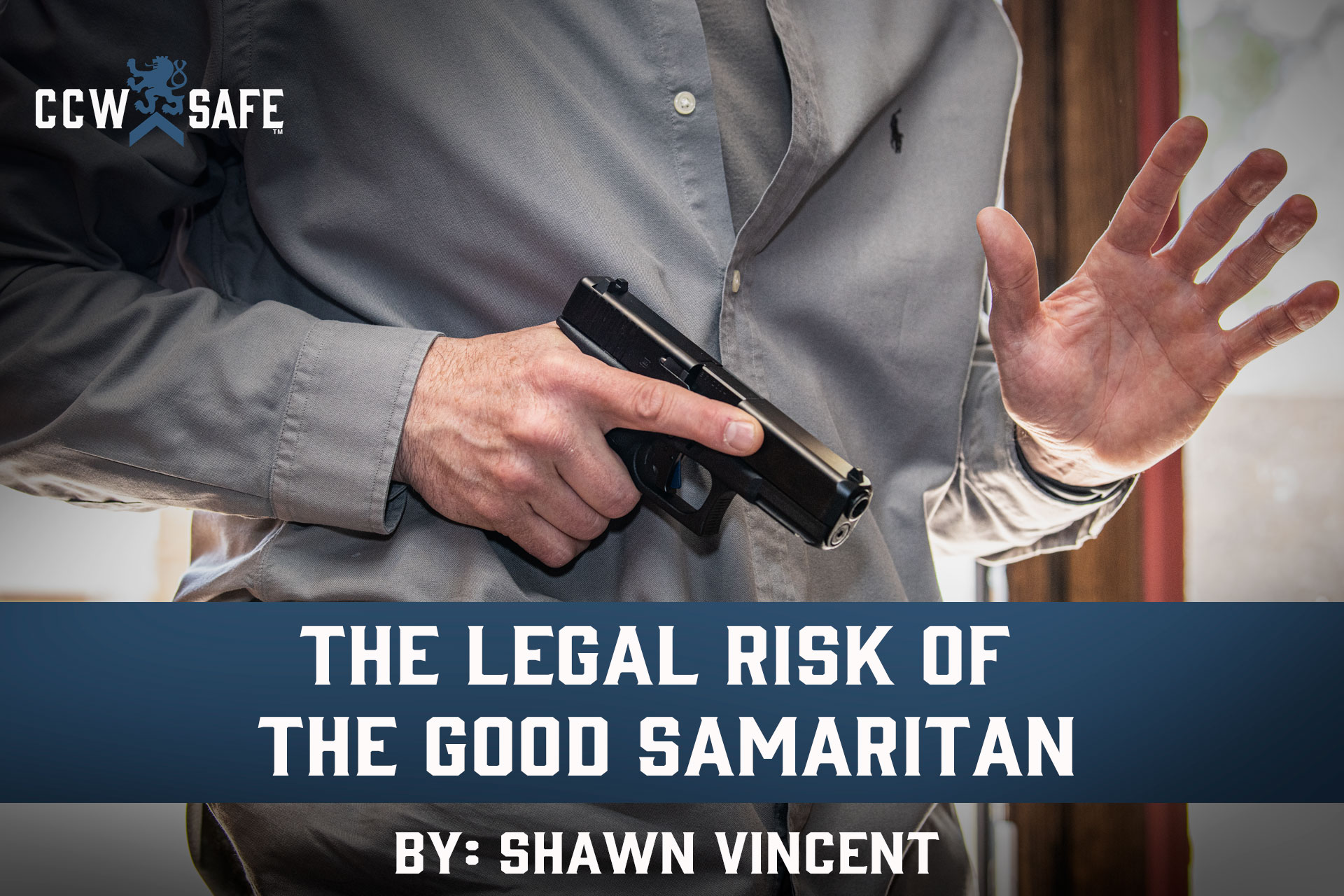 Posted on November 1, 2019 by Shawn Vincent in In Self Defense

The Legal Risk of the Good Samaritan

The Legal Risk of the Good Samaritan

Displaying your firearm in the defense of others

An 18-year-old from Allentown, Pennsylvania became enraged at a middle-aged driver and chased him across town, blowing through multiple redlights during the pursuit. After several minutes, the middle-aged driver stopped and parked. So did the teen. When the two confronted each other face to face, the teen drew a knife and slashed at the man. The man responded by punching the teen in the face, and both wound up wrestling on the ground.

That’s when a third-party stepped in. Another man, a concealed carrier, happened upon the fight, drew his pistol, and ordered the men to stop. They did. Someone called the cops, and when police arrived, the officers found two men on the ground and a third standing several feet away in a shooter’s stance pointing a gun. A witness captured some of this event on video.

The local press referred to the concealed carrier as a “good Samaritan,” and arguably, he saved the victim of this road rage incident from serious bodily injury or death. However, by stepping in and drawing his weapon, the good Samaritan opened himself up to potential legal risk.

In the video, a witness can be seen picking up the knife and moving it away from the two men on the ground. Meanwhile, the concealed carrier keeps his gun trained on the combatants. I spoke with CCW Safe National Trial Counsel Don West about this case. He raised a question about what the concealed carrier would have done if the teen continued to show aggression. Would he have fired? “If he’s been disarmed,” West says, “to shoot him would be very disproportionate. . . and then all of a sudden, the good Samaritan’s looking at a serious crime.”

In other defensive display cases we’ve examined, we’ve suggested that as general rule, you’re only justified in displaying a firearm when you would have otherwise been justified in firing the weapon. That said, we studied the case of a woman from Mississippi who ended a fight by drawing her pistol and warning off the unarmed attacker. While she would NOT likely to  have been justified in firing under that circumstance, no charges were filed for the defensive display. She was in a legal gray area, and in her case, the discretion of police and prosecutors fell in her favor. The concealed carrier in the Allentown case — once the teen had been disarmed — put himself in a similar gray area; it just so happened to work out in his favor.

Whoever called 911 in this scenario must have done a good job establishing the context because, as best as I can tell from the reporting, the first officers on the scene understood why there was a man there with a gun drawn. Imagine how police would have responded if the situation was not so clear. Based upon my experience with law enforcement in the criminal courts, I don’t ever want to be the guy with a gun drawn when the police arrive. It’s a terrific way to get yourself shot. This good Samaritan not only put himself in potential legal jeopardy, but he put his life in jeopardy as well.

Don West says that you’re typically not legally allowed to do something in defense of another that you wouldn’t be able to do yourself if you were in the victim’s shoes. The trouble with that is you don’t have all the same information about the encounter as the victim. In fact, you might not even be able to know who the victim is. The good Samaritan in Allentown didn’t see the conflict from the very beginning. How was he to know who the first aggressor was? How did he know what side to pick? I recently wrote about how tragic misperceptions can lead to unjustified shootings, and arguably, the risk of misperceptions in defense of another is greater than if you were defending yourself.

The lesson for the concealed carrier is that when you use your firearm in defense of others — whether you fire or simply display your weapon — you take on significant personal and legal risk. Unless there is an imminent threat of death or great bodily harm, you should consider staying out of the conflict. Often, the best way to be a good Samaritan is to keep your firearm holstered and just be a good witness. If you decide you must intervene to stop a violent encounter, you should first be conscious of the extraordinary consequences you might incur.