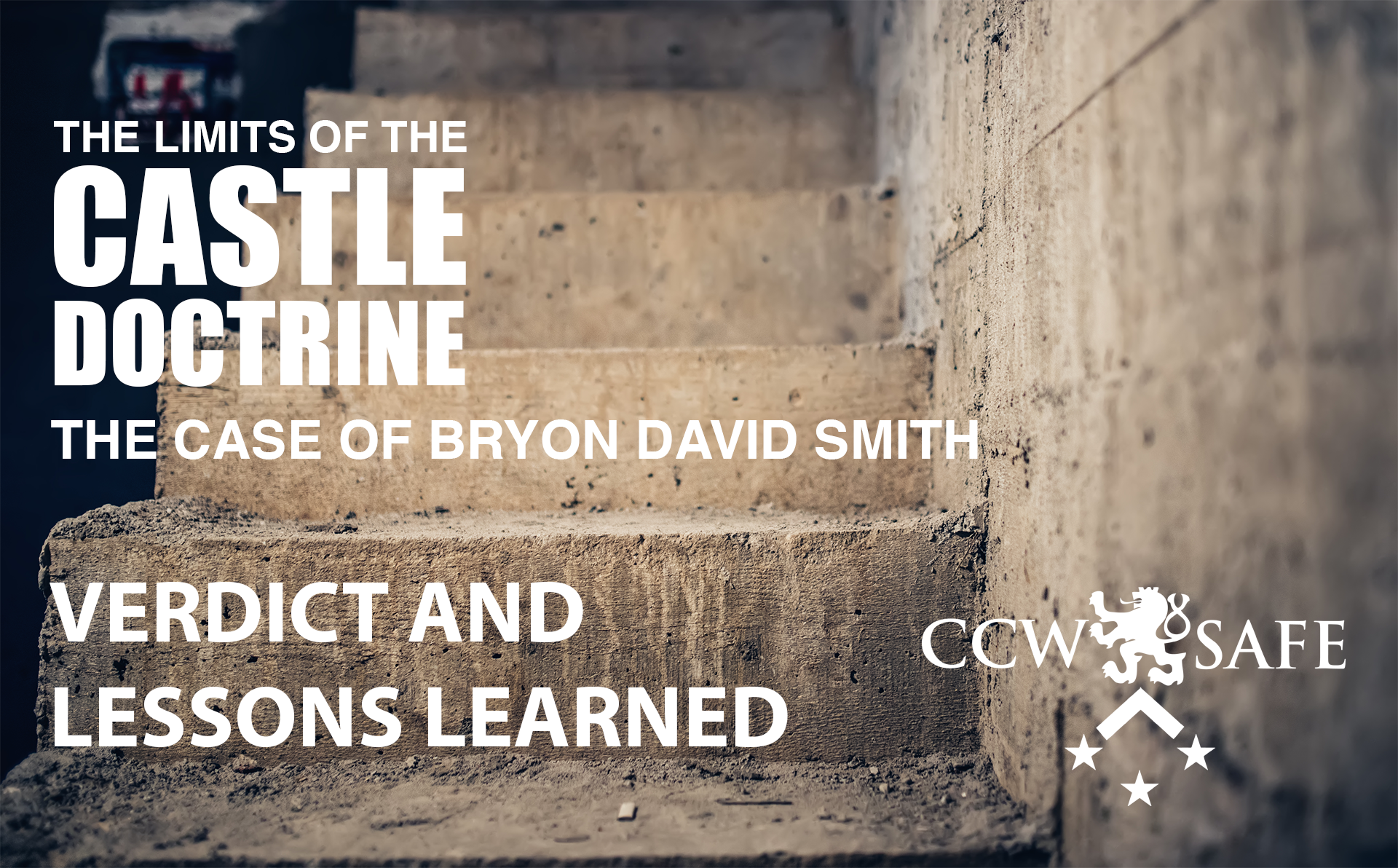 The Limits of the Castle Doctrine

Part 6: Lessons from the Guilty Verdict of Byron David Smith

In our series The Four Elements of Self-Defense, we’re exploring how location, escalation, reasonable fear, and post-incident accidents can affect the legal defense in the wake of a self-defense shooting.  In our last installment, we explored how post-incident actions factored into Smith’s legal defense  In this installment we’ll look at the lessons we can learn from Smith’s guilty verdict.

Byron David Smith, who had been the victim of multiple burglaries, shot and killed two teenagers after they broke into his Little Falls, Minnesota home on Thanksgiving day 2012. Earlier in the day, Smith parked his car down the street so, as prosecutors argued at trial, it would appear as if he we’re not at home. When security cameras captured cousins Nick Brady and Haile Kifer snooping around his property and peeking in windows, Smith retreated to his basement where he waited in a chair near the bottom of the staircase armed with a Ruger Mini-14 and a .22 revolver.

After breaking in through a ground floor window, Brady descended the basement stairs first, and Smith met him with three shots from his Mini-14 — the final lethal shot striking Brady’s head while he lay wounded and bleeding on the basement floor. Kifer came down the stairs 10 minutes later, and Smith shot her six times, including a final shot under her chin, which Smith later said was meant to end her suffering.

Smith failed to report the shootings to law enforcement, and was discovered only after his neighbor called authorities the next day, concerned about a telephone exchange with Smith where he claimed to have “solved the break-ins in the neighborhood.”

When Sheriff’s deputies arrived, Smith led them to the basement where he had wrapped the bodies in tarps and left them to rot in a dark corner.

Smith made multiple statements to law enforcement where he showed little remorse, claiming to have done his “civic duty” and admitting the her fired more times than was necessary.

Moreover, Smith captured a haunting audio recording of the entire deadly encounter. At trial, the jury heard the recording three times. Three times they heard Smith shout “You’re dead!” As he fired the final shot that killed Brady. The jury heard Smith yell “You’re dying!” Before shooting Kifer under the chin. They heard him refer to the teens as “social problems.”

One of the 12 jurors, Wes Hatlestad, said, “That audio recording of the actual killings and the audio recording of Mr. Smith’s interview immediately after his arrest. . . pretty much convinced me that we were dealing with a derange individual.”

The jury deliberated for just three hours before rendering a guilty verdict on two counts of first defeee murder. The judge sentenced Smith to live in prison with our the possibility of parole.

Don West, National Trial Counsel for CCW Safe and veteran criminal defense attorney says that, even without the damning audio recordings, Smith may still have been found guilty. “Even under different facts, every bullet has to be justified.” Forensics showed Brady and Kifer had already been incapacitated before the final shots.

“I can’t imagine a more premeditated set of murders,” West says. “He set the stage and proceeded in an almost methodical — almost premeditated way.”

Even if Smith hadn’t set the stage for the shootings, he missed multiple opportunities to resolve the situation without using deadly force. He never called 9-1-1, and he never tried to scare the teens away as he sat, armed, in the relative security of his basement.

The Morrison County Sheriff told the Minneapolis Star Tribune, “This isn’t a case about whether you have the right to protect yourself in your home. You clearly do. That’s a given.”

“Rather,” he said, “this is a case about where the limits are.”

Don West says the jury drew the line on those limits with the verdict. The conclusion was that Smith “turned a home invasion into a shooting gallery.”

The lesson for the gun owner concerned with home defense is that, while the Castle Doctrine affords homeowners a relatively wide berth in regards to confronting unwelcome invaders with lethal force, it is not a license to kill.  You cannot lure would-be burglars to your home and lie in wait to shoot them. Even when in your home, you cannot use more force than necessary to eliminate a threat. Once an intruder is incapacitated, you have to stop shooting.

There is not often a lot of time to think when you encounter an intruder in your home, but hopefully you can find a moment to search your heart before you pull the trigger. If you find genuine fear of imminent death or bodily harm, there’s a good chance you’ll be justified. But if you find anger and a desire for revenge — it may be murder — and you may not be able to count on the Castle Doctrine to save you.

In the next installment of The Four Elements of Self-Defense we’ll explore another Castle Doctrine case — the case of Ted Wafer who shot a young woman as she tried to enter his Detroit home in the middle of the night.