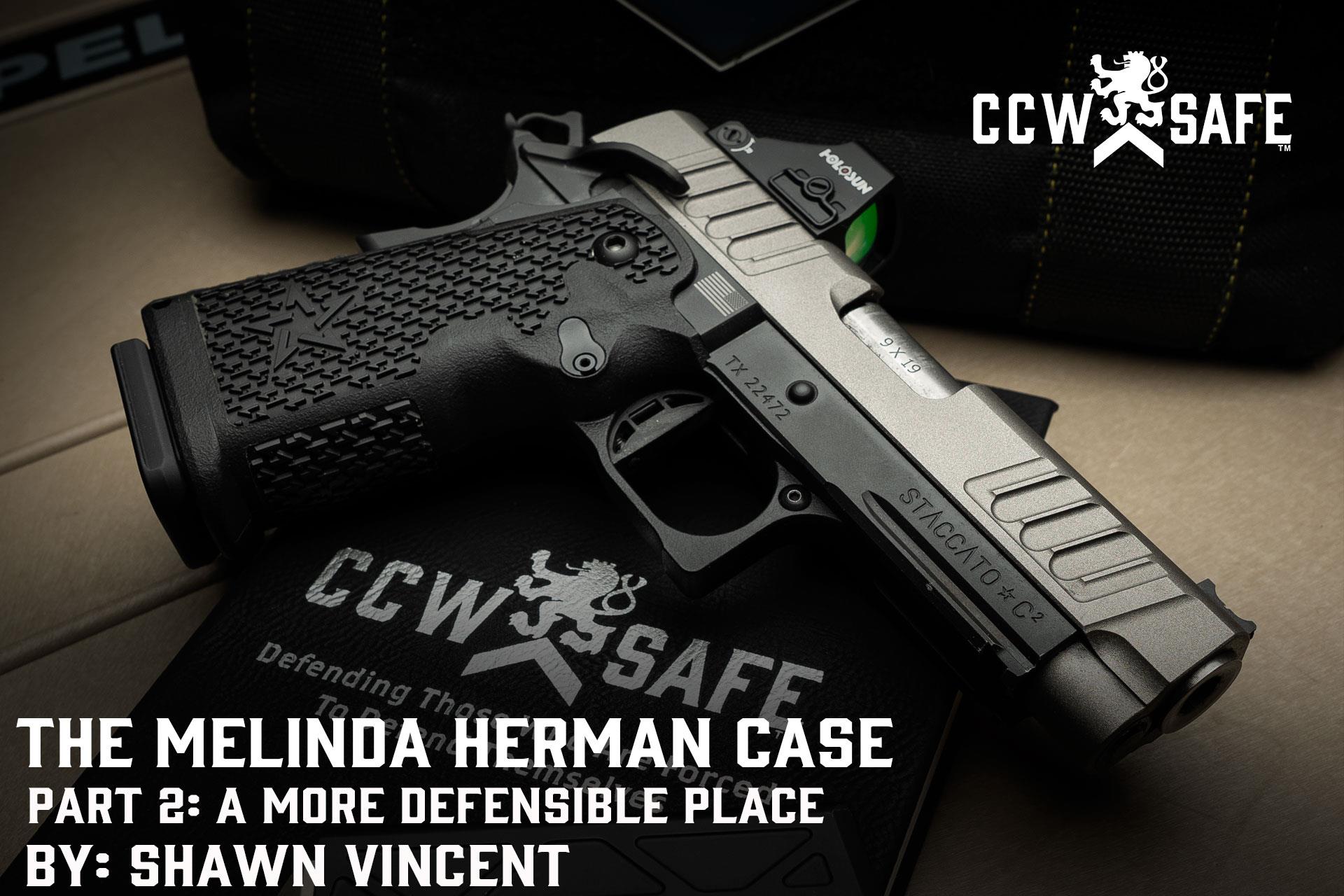 Posted on July 2, 2021 by Shawn Vincent in In Self Defense

Melinda Herman chose to ignore the strange man who was at her front door, incessantly ringing the bell. She had decided to work from home that Friday in order to watch her 9-year-old twins, still home from school for the New Year’s holiday. When the stranger walked to his SUV, retrieved a crowbar, and started marching back towards her house, Melinda knew it was time for action.

Just two weeks earlier, Melinda’s husband Donnie took her to the range and taught her how to fire a six-shot revolver. Presently, she grabbed that pistol and called her husband at work as she ushered her children upstairs. She retreated into her bedroom, into the ensuite bathroom, and she hid in an attic space with access to the bathroom through a tiny door. Besides the locked front door, she locked two other doors behind her as she fled the intruder. He smashed through all three until she heard him in the bathroom.

“Melinda,” her husband said, “if he opens up the door, you shoot him! You understand?” The door opened. Melinda fired. She struck the intruder, a career criminal named Paul Slater, five times in the face and torso. None of the shots killed Slater, but they were enough to convince him to break off the attack. He rushed out of the house, jumped into his SUV, and crashed into a tree in a nearby subdivision. First responders managed to resuscitate him. He lived to be convicted of his crime.

Melinda Herman is not the first defender we’ve written about who encountered a perceived intruder behind a locked front door.

We told you about Army veteran Greggory Farr who was startled awake at 3:30 am to find a man twisting the doorknob and slamming the front door with his shoulder. Farr fired his rifle through the door, killing the man on the other side, a Chief Petty Officer in the Navy who, due to ship out in the morning, was drunk and mistook Farr’s townhome for his own. Farr was charged with manslaughter.

Ted Wafer, like Farr, woke up in the middle of the night to the sound of frantic pounding on his front door. He grabbed his Mossberg tactical shotgun and ventured into his living room to investigate. During a lull in the pounding, he opened the front door to see who was outside. Startled by the silhouette of a dark figure standing inches away, Wafer squeezed off a round, killing a seventeen-year-old girl who was drunk, high, injured, and most likely looking for help. Ten Wafer is serving a 17-year prison sentence for second-degree murder.

Charles Dorsey, like Farr and Wafer, was awoken at night by the sounds of someone trying to enter the front door of his home. Dorsey had the wisdom not to fire through the door as Farr did. Dorsey’s wife begged the defender not to open the door, saving him from making the tragic mistake that led to Wafer’s conviction. Instead, Dorsey instructed the stranger to go away, and he fired only after the intruder broke the lock and threw open the front door. It was a fatal shot that ended the life of Gary Espinoza, the confused, intoxicated houseguest of Dorsey’s new neighbors. After a month-long investigation, prosecutors ruled the shooting of Gary Espinoza was justified.

Although Dorsey was justified, during our exploration of the case, CCW Safe contributor and firearms instructor Steve Moses offered an alternative for dealing with a potential stranger at the front door. Steve suggested Dorsey could have withdrawn to a room deeper in the home, found a “hard corner,” and waited to see if the intruder followed. A “hard corner” is a corner on the same wall as a door; it’s the last place an intruder would see if he came into the room, and it would give the defender a tactical advantage if the intruder posed a threat. It’s a tactic that allows the defender to possibly avoid a shooting, and it helps disambiguate the intruders’ intentions should the use of force become unavoidable.

In the Melinda Herman case, it was clear the intruder wasn’t a confused, intoxicated accidental interloper. By approaching the front door with a crowbar, Slater sent a clear message that he meant to break in. However, rather than waiting in the living room to meet the intruder face to face once he broke through the front door, Herman, as Steve Moses notes, “gathered up her children, got access to the revolver, and she retreated to a more defensible space. She got herself into a position where she was going to see that guy before he saw her.”

The facts are unclear regarding whether Slater knew anyone was in the house. At trial, Slater admitted that he broke in to steal, but claimed he didn’t know anyone was home. Despite his claims to the contrary, the intruder seemed intent on finding Herman — making the effort to smash through two more locked doors to get to her. With each locked door that Slater breached, he sent Herman a clear signal that his presence was not accidental and that his intentions were malicious. With each threshold he breached, he made Melinda Herman’s use of force that much more justified.

Firearms instructor Tatiana Whitlock introduced us to the Melinda Herman case. Tatiana says Herman “worked really hard to put barriers between herself and her children. If you’re home alone, that’s one thing, but if you’re home with people you’re responsible for, and little kids, what are you going to do? She chose a place that she felt, clearly, was the most inconvenient and hard to get to, and he pursued her through an entire household.”

Don West, criminal defense attorney and National Trial Counsel for CCW Safe, says the Melinda Herman case is one of the most clear-cut self-defense cases we have encountered. “When Melinda Herman knew someone was in the house, and knew doors were being broken into, she gained a reasonable belief that this guy was coming after her, coming after the kids.” She did everything she possibly could to avoid the shooting, and she couldn’t have been more justified when she finally pulled the trigger.

The lesson for the concealed carrier is that, no matter how justified you are in using deadly force in self-defense, if you can safely avoid a shooting, that is a better outcome. Furthermore, if you make every effort to avoid a self-defense shooting and the attacker persists, it amplifies your self-defense claim. Farr was prosecuted. Wafer was convicted. Even Dorsey endured a month-long investigation before being declared justified. Just six days after the shooting of Slater, Sheriff Joe Chapman told reporters, “This lady decided that she wasn’t going to be a victim, and I think everyone else looks at this and hopes they have the courage to do what she done.” If you’re ever forced to defend yourself against an intruder, I assume you’d want a similar response from the local Sheriff. That’s Melinda Herman’s lesson for you.