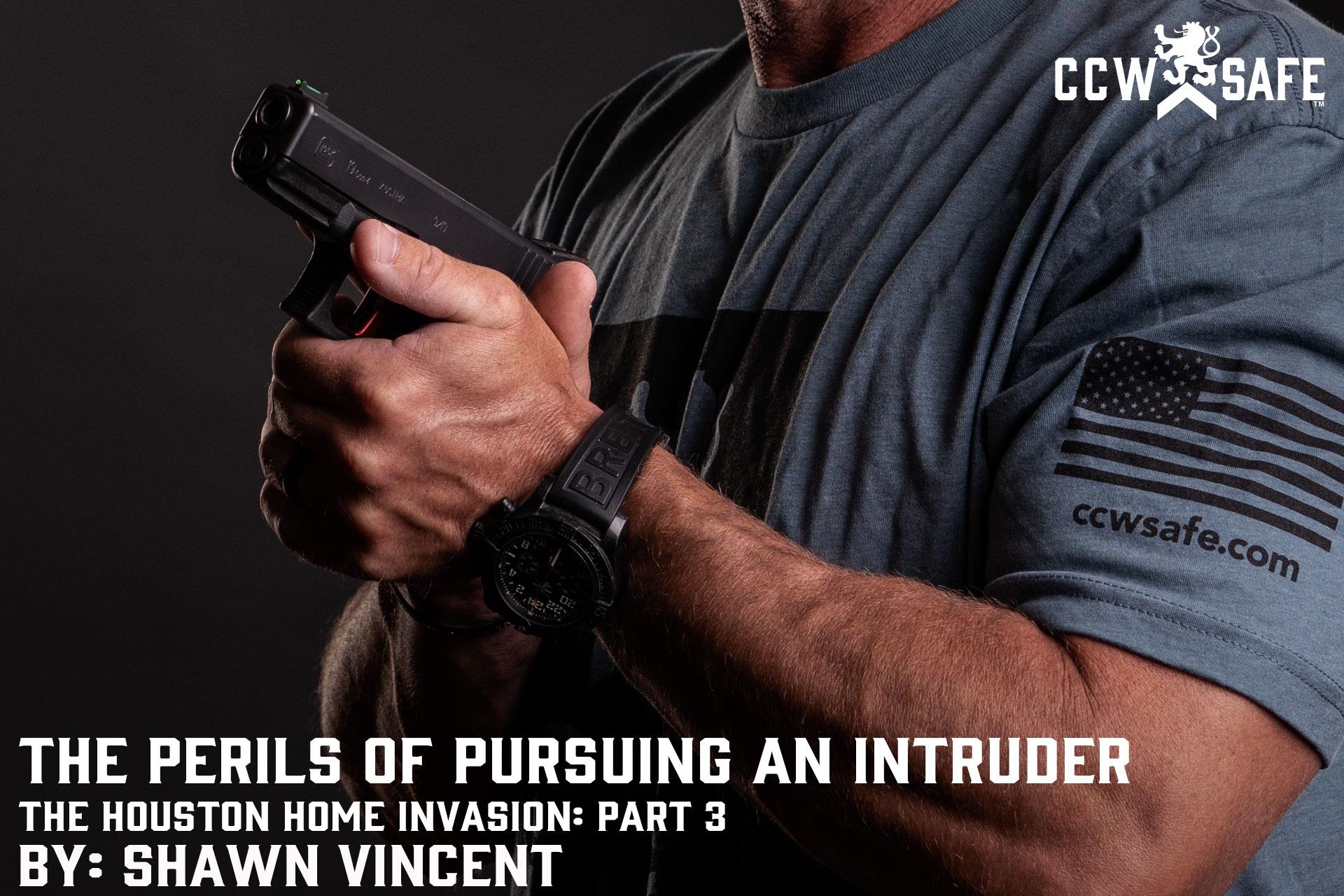 Posted on December 17, 2021 by Shawn Vincent in In Self Defense

The Perils of Pursuing an Intruder The Houston Home Invasion: Part 3

If you ever find yourself witnessing two masked assailants throw themselves on the hood of your mother’s car while she tries to flee a gunfight, you might ask yourself, “How did I get here?” For a young man in Houston, Texas, it all began just minutes earlier when he and his mother were returning home around midnight. His father had arrived in a different car just moments before, and he was attacked by three masked intruders who leaped out of some bushes and forced him inside — where his daughters were hiding in a closet. When the son saw signs of a struggle, he armed himself and rushed to his family’s rescue. Earwitnesses nearby counted eleven gunshots, two bursts of five followed by a single shot. It’s unclear whether the son fired all eleven or whether a gunfight unfolded, but before it was all over, the young man chased the intruders out of the house and shot one of them in the head while the other two intruders threw themselves onto the hood of the mother’s car.

Was the son legally justified in arming himself and rushing off to engage the intruders? Normally, leaving a place of relative safety to engage a threat carries an extraordinary legal risk, but because the son was rushing to protect his sisters and father from an imminent threat, he had the law on his side.

Was it a good tactical decision to rush, outnumbered, into an uncertain dynamic combat situation? Despite the son’s commendable courage, without advanced training, he risked making the situation catastrophically worse. He was lucky that the hapless invaders failed to put up any significant, coordinated resistance.

Was the son legally justified in pursuing the intruders and firing at them as they fled? Now we start to tread onto some murky legal ground. Although the reporting on this event is incomplete, we know that prosecutors convened a grand jury to decide whether criminal charges were warranted for the homicide. We don’t know the results of the grand jury deliberations, but if there was any controversy, it was likely over the son’s decision to pursue the intruders and fire at them as they fled.

Lawman and firearms instructor Chuck Haggard told us that the purpose of self-defense is to “break contact” with an aggressor. A defender should use only as much force as is required to break contact, and once an attacker has disengaged, the use of deadly force is generally no longer justified. If an attacker is fleeing and you fire at them, it is difficult to make a credible claim that they presented an imminent threat of great bodily harm or death.

Firearms instructor Tatiana Whitlock agrees. For her, the goal of self-defense is to “eliminate dangerous things from my space and my life in the most expedient way possible.” She says, “I do not want a long experience as part of my life story, because the longer those encounters go on, the more danger and peril you put yourself and others in.” Tatiana refers primarily to the physical risk of life and limb that emerges from a prolonged armed encounter, but there is an increased legal risk as well.

Don West, criminal defense attorney and CCW Safe National Trial Counsel, says that when you choose to pursue a threat, legally the first encounter where you may have been justified in using deadly force ends and a second encounter begins, one in which you may legally be considered the aggressor.

In the Dunn case, Michael Dunn shot Jordan Davis after a heated argument about loud music in a gas station parking lot. A security camera failed to capture the video of the shooting, but it recorded the audio, and as in the Houston home invasion, there were three bursts of shots fired. The first two bursts came in rapid succession immediately after the argument, where Davis, by his friends’ own admission, made threats against Dunn. The final burst, however, according to Dunn’s testimony, was fired at the teenagers’ vehicle as his friends sped off to flee the shooter. At Dunn’s first trial, a jury deadlock over the murder charge related to the first two bursts, but they all agreed that the final shots at the fleeing vehicle qualified as attempted murder.

In the Andrew Sheets case, Sheets entered his old, unoccupied house to confront two intruders he suspected were trying to steal some possessions he had left at the property. He chased both out of the house and shot one in the buttock while he was trying to flee. The prosecutor charged Sheets in the case, saying, “He was not protecting himself or his home; he was trying to take the law into his own hands.”

A self-defense scenario is dynamic, and the window for the justifiable use of deadly force can open and close quickly. An armed defender must maintain situational awareness and adapt to avoid severe legal consequences.

In the Houston home invasion case, it seems the intruders, as they fled the house and moved away from the defender’s sisters and father, were also charging towards the mother and a younger sibling who were still in the car. It is very possible that when the son shot at one fleeing intruder, he was actually trying to prevent him from committing a violent carjacking. It is lawful to use deadly force to protect others from an imminent threat of great bodily injury or death, and in most jurisdictions,  deadly force is justified when used to stop the commission of a forcible felony. Carjacking and kidnapping generally qualify as forcible felonies.

We don’t know most of the important details about the Houston home invasion case. We don’t even know the names of the defender or his family. We certainly don’t have a moment-by-moment account of how the extraordinary events unfolded, so it’s impossible to make any definitive judgments. It is likely the grand jury exonerated the shooter. If that’s true, it means the son successfully negotiated a precarious tactical situation where he was outnumbered by violent intruders, and he threaded a delicate legal needle by using just enough force to save his family and send the surviving intruders running. Considering the horror that the intruders inflicted upon the family, the son could be commended for showing restraint and not pursuing the surviving intruders as they fled the property.

The lesson for concealed carriers is that self-defense scenarios are dynamic, and the window for the justified use of deadly force can close as quickly as it opens. Deadly force is justified when an attacker poses the imminent threat of great bodily harm or death to you or to another. Once you are successful in breaking contact with an attacker, the use of deadly force is no longer warranted. Pursuing an attacker could legally set the stage for a second encounter — but this time, you may be considered the aggressor. Unless the fleeing attacker poses an immediate, credible threat to another, the best policy, as Tatiana Whitlock says, is to “Let them go! Let them go!” Be a good witness, call 9-1-1, and give law enforcement all the information they need to pursue your attacker. Avoid the temptation to take the law into your own hands.