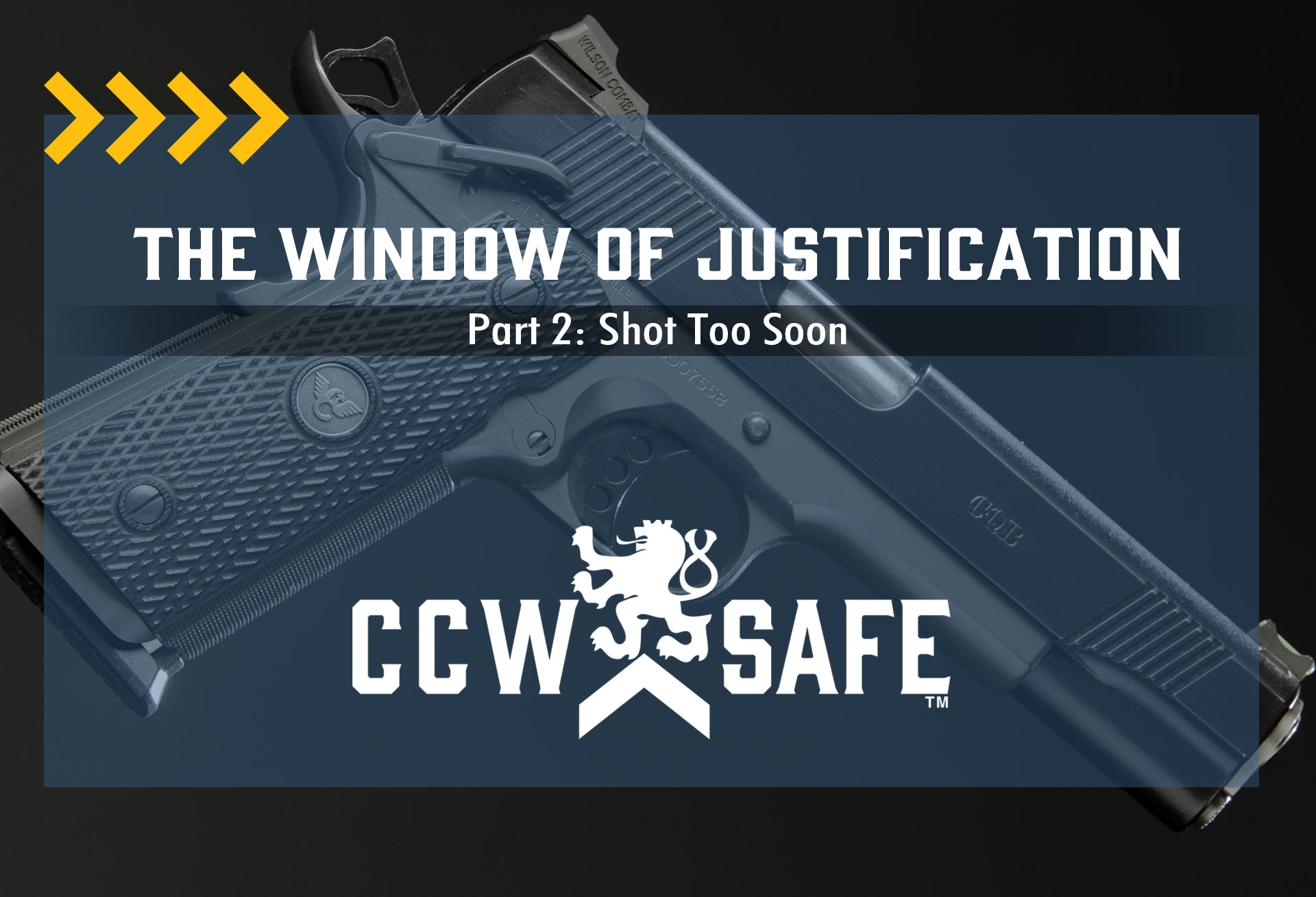 Posted on April 24, 2019 by Shawn Vincent in In Self Defense

The Window of Justification Part 2: Shot Too Soon

Before the Window of Justification Opens

Recently we discussed the concept of the “window of justification” as it pertains to using deadly force for self-defense. Don West, National Trial Counsel for CCW Safe and veteran criminal defense attorney, said “It’s a clearly defined window in the law. If you shoot too soon or too late, regardless of how imminent that threat was at one point in time, you’ve gone outside the parameters of the law.”

In our series The Four Elements of Self-Defense, we explored nine high-profile cases. In the cases where shooters fired too early — before the window of justification opened — it was usually because they shot before they were able to make a proper threat assessment.

Here are two cases we explored where the shooter fired before the window of justification opened:

Markus Kaarma lived with his common law wife and new baby in Missoula, Montana. Recently, they had been victims of a burglary; someone had stolen some valuables from their opened garage at night. Kaarma set up the baby’s video monitor in the garage, and placed his loaded shotgun by the front door. One night near midnight, the baby monitor alerted him that there was someone in his garage. All he could make out was a shadowy figure.

Kaarma grabbed his shotgun, exited his home though the front door, and fired four shots into the open, darkened garage. Two shots hit the intruder. One proved fatal. Police identified individual killed as an unarmed 16-year-old foreign exchange student who had learned the art of “garage hopping” from his American friends. He was probably trying to steal beer from Kaarma’s garage refrigerator.

Kaarma tried to convince police that he had heard a sound from the garage that sounded like metal on concrete — perhaps a weapon of some sort. He claimed that he thought he saw something thrown at him from the garage, but investigators found nothing of the sort. Prosecutors believed that Kaarma couldn’t see the intruder when he fired, and he had no way of determining if the intruder posed an imminent threat.

Don West says that the law favors homeowners in self-defense shootings. If someone breaks into your house, you can assume they pose a threat; however, when you cannot see the intruder, it’s difficult to determine if the individual poses an immediate threat of death or great bodily harm. “You don’t have to wait too long to see if there is going to be harm,” West says, “but it’s important to make some type of assessment before you pull the trigger.”

“I Wasn’t Going to Cower in My House.”

Ted Wafer awoke to a “boom, boom, boom pounding” on his front door. His lawyer, Cheryl Carpenter, told jurors at trial that “the floor was shaking.” It was just before four in the morning, Wafer was disoriented. He couldn’t find his cell phone to call 911, so he grabbed his Mossberg tactical shotgun.

“His heart was coming out of his chest,” Carpenter said. “He thinks it is not one person; it is two or more people.” Wafer was “a man under siege in his own home.” Wafer testified, “It was them or me. I wasn’t going to cower in my house.”

During a lull in the pounding, Wafer opened his front door to see what was happening. There he was surprised to see a shadowy figure standing on his porch. He claimed the individual tried to push in through the screen door. His lawyers brought the mangled door to court to show jurors. Wafer fired one round, striking the figure in the head.

The shadowy figure turned out to be 19-year-old Renisha McBride — a former cheerleader and recent highschool graduate. Earlier in the evening she had been drinking with a friend. They got high on marijuana. Then they got into a fight, and despite having a blood alcohol level nearly three times the legal limit, McBride drove off. Around one o’clock in the morning, she struck a parked car and hit her head on her steering wheel. A witness saw her wandering around, disoriented. She must have wandered for hours before she started banging on Wafer’s door, presumably mistaking his house for the home of someone she knew. She was probably looking for help.

“He would not have known that she was drunk or high,” Don West says, “He would see someone out of control and physically aggressive. It’s hard for him to say ‘your not a threat.’” Had Wafer taken more time, however, to try to assess the threat that was on the other side of his locked front door, he might have been able to see it was a young woman in need of help. Prosecutors at trial told jurors that “what he did had to be immediately necessary, and it wasn’t. It was reckless. It was negligent. . . It was horrific.”

The Lesson for Concealed Carriers

Both Marcus Kaarma and Ted Wafer fatally shot intruders before they were able to assess the threat the individuals posed. In both cases, the intruders turned out to be unarmed. In both cases, the intruders hadn’t made it into the main living area of the home; Kaarma and Wafer left the relative safety of the home and met the unknown threat outside. Both men shot too soon. The window of justification never opened.

All of these factors played against the shooters at trial. Juries convicted both men: Kaarma for intentional homicide (what that call murder in Montana) and Wafer for second-degree murder. Kaarma will spend the rest of his life in jail. 54-year-old Wafer got a minimum sentence of 54 years.

The lesson for concealed carriers and gun owners concerned with home defense is that, even when you’re in the sanctity of your own home, should you ever face an intruder, it is important to make a threat assessment before firing. Like Don West says, you don’t have to wait too long, but you should make the effort before you pull the trigger. If you fire indiscriminately, you might kill someone unjustifiably, and you could be guilty of murder.