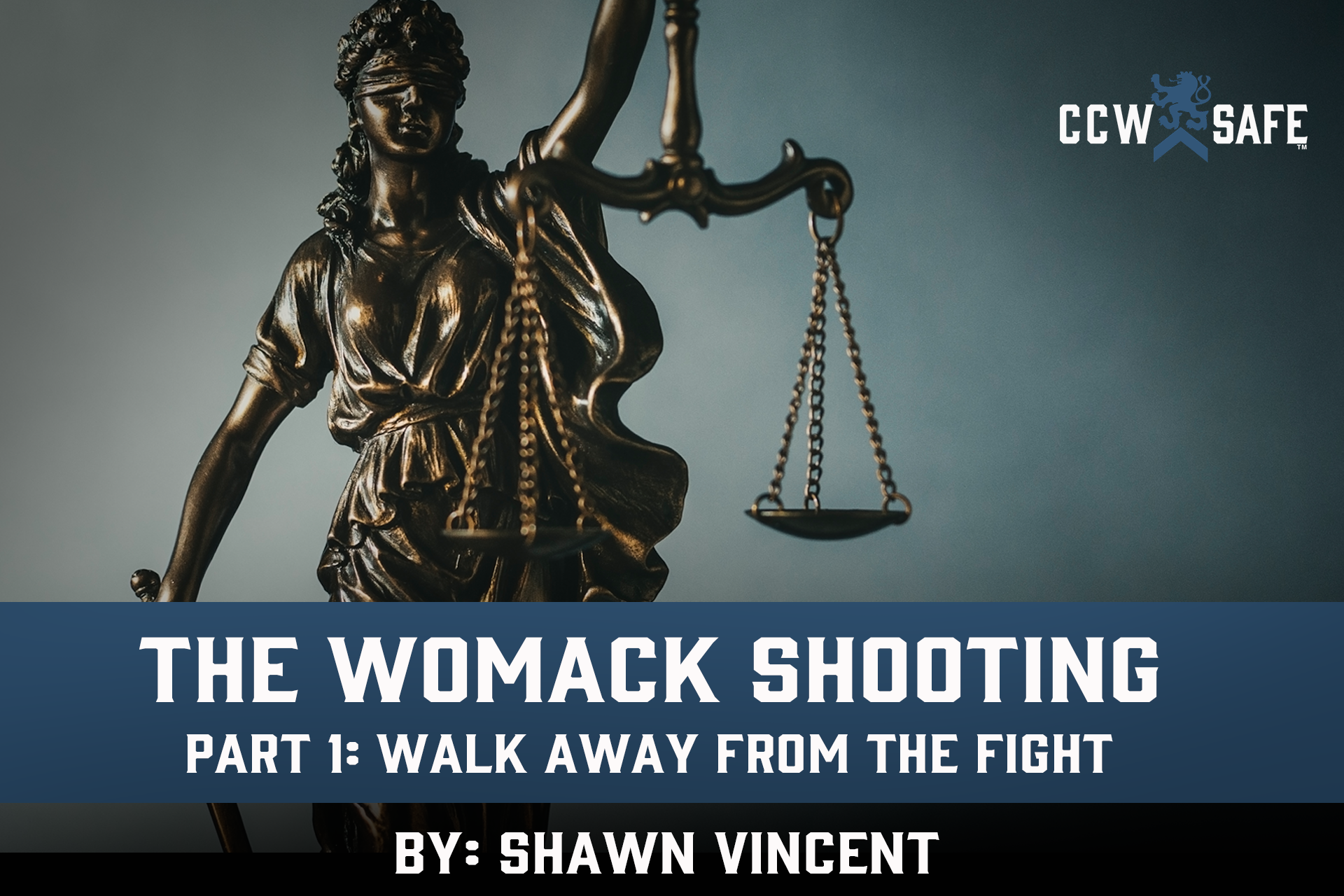 Posted on June 5, 2020 by Shawn Vincent in In Self Defense

The Womack Shooting Part 1: Walk Away From the Fight

Part 1: Walk Away From the Fight

Alan Jamal Womack Jr. joined a pick-up game of basketball at a fitness center in the King of Prussia Town Center near Philadelphia, Pennsylvania on the evening of February 28, 2020. Before the end of the night, Womack would be dead, killed by a single gunshot to the chest. Three weeks later, Montgomery County District Attorney Kevin R. Steele would declare the homicide justified — an act of self-defense. “As in any matter where someone is not charged with a crime,” Steele announced, “we do not reveal his or her name to the public.”

We will refer to the shooter in this case as “the defender.” Here’s how the shooting went down:

During the basketball game, Womack accused the defender of a “traveling” foul, triggering a  heated argument. The PhillyVoice reports that “the altercation was initially broken up by others on the court, but when the game resumed play, Womack allegedly threatened to shoot the other man in the head.” The defender decided to quit the game and left the gym.

Surveillance video shows Womack following the defender out of the gym. Witnesses describe Womack pursuing the defender into the parking lot and yelling at him before drawing a Taurus 9mm pistol from his pocket. According to CBS Philly, “A witness told investigators Womack racked a round into the chamber, while getting within feet of the other man, who then pulled a 9mm Glock firearm from inside his backpack and fired one shot at Womack.” As Womack fell, he discharged two wild shots that struck nearby vehicles, hurting no one.

When District Attorney Steele announced that no charges would be filed, he specifically noted the defender tried “several times to de-escalate the situation.” When Womack threatened to shoot him in the head, the defender had the presence of mind to quit the game and leave. When he heard Womack shouting at him in the parking lot, the defender ignored the threats and continued to walk away. Finally, when Womack was only feet away, armed with a pistol he had just racked and made ready, the defender made the split-second, life and death decision to draw his weapon and fire.

Don West, criminal defense attorney and National Trial Counsel for CCW Safe, says that prosecutors are “going to look at the totality of the circumstances and focus on those moments in time where a different decision could have been made or should have been made, and whether, overall, the defender’s course of action was reasonable.” In the Womack shooting, the prosecutor could find no fault in the defender’s actions.

In another case we recently explored, where the defender received a similar verbal death threat, the prosecutor did find fault with the shooter’s decisions. After a minor automobile collision, Alexander Weiss exited his vehicle to exchange insurance information with the other driver. He was surprised to find the passenger of the other vehicle had gotten out of the car. The passenger assumed an aggressive posture and threatened to kill Weiss if he called the police. Weiss could have walked away like the defender in the Womack case, but instead, he went into his vehicle, retrieved his pistol, and returned to the confrontation.  Ultimately, the argument escalated, and Weiss felt threatened enough that he fired his weapon and killed the driver of the other vehicle.

The prosecutor in the Weiss case argued that Weiss could have walked far enough away to diffuse the situation, or he could have gotten in his car and called police. “Instead,” the prosecutor said, “he went back to his car. . . and then came back out. That’s where things went wrong.” Just like Don West said, the prosecutor second-guessed the defender’s decisions. Only after two mistrials with hung juries did the prosecutor reluctantly drop charges.

The conclusion we drew from the Weiss case is “don’t go back to the fight.”  The result of the Womack shooting reinforces that lesson and takes it one step further. The lesson for concealed carriers is, if it is safe to do so, always walk away from a fight. Pennsylvania is a “stand-your-ground” state, meaning the defender in the Womack shooting had no legal duty to retreat. Nonetheless, the prosecutor made it clear that the defender’s choice to walk away from the fight on multiple occasions weighed heavily on his decision to declare the shooting justified. Depending on where you live, you may or may not have a legal duty to retreat, but as a concealed carrier, you may, in many cases have a moral duty to retreat, and if you abide by that moral duty, should you ever find yourself in a self-defense shooting, the odds that you’ll be found justified go way up.