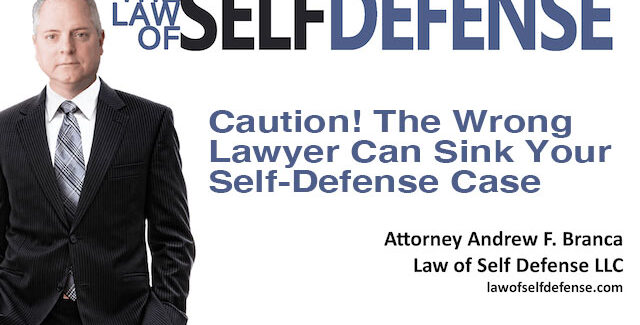 Posted on November 23, 2019 by support@ccwsafe.com in Uncategorized

The Wrong Lawyer Can Sink Your Self-Defense Case

Caution! The Wrong Lawyer Can Sink Your Self-Defense Case

I had an interesting appellate court decision out of Florida come across my desk this past week.  It hit on several key cautions I thought worth sharing with all of you, including how the wrong lawyer can sink your self-defense case, as well as the importance of being prepared to wage more than a single legal battle in your fight for your freedom.

That appellate decision is Washer v. State, out of the Fifth District Court of Appeal in Florida, but the lessons it provides apply in any jurisdiction.  The basic facts are that Washer was involved in a family argument that ended with him firing multiple shots, resulting in multiple counts of aggravated assault with a firearm (and other charges), and his conviction on all of those charges.  In short, it was about as bad a legal outcome as possible.

A closer look at the facts suggests that Washer had at least a prima facie basis for arguing self-defense as justification for the shots he fired, and for which he was convicted of five counts of aggravated assault.  In particular, it was uncontested that prior to Washer firing those shots he was first attacked by his adult stepson, who repeatedly struck Washer with an axe handle.

Arguably, then, Washer fired those shots in self-defense against this attack.  There was, of course, also evidence inconsistent with self-defense, but every witness agreed that the axe handle attack occurred prior to Washer firing his gun.

Those of you who have served jury duty will recall that the jury can only arrive at a verdict based on the jury instructions provided by the court.  If a jury instruction on a particular defense—for example, self-defense—is not provided, the jury is simply unable to acquit the defendant based on that defense. In effect, the defense is taken off the table entirely.

Now, there can be perfectly good reasons why a defense lawyer might not want the jury instructed on self-defense, and why they might not wish to argue self-defense to a jury.  It might be, for example, that the defense lawyer believes they have a very strong alibi defense—in essence, the defendant couldn’t have committed the charged offense, because the defendant wasn’t even physically present, he was somewhere else entirely at the time the charged events took place.

Well, if one plans to argue alibi, it’s hard to also argue self-defense.  It just doesn’t come across as very credible to argue to a jury, “My client could not have committed these crimes as charged because he was all the way across town at the time … but if you don’t buy that one, I’d like to instead try to convince you that he did it, but he did it in self-defense.”

If Washer’s lawyer had made that kind of strategic calculation, and chosen not to argue self-defense for that reason, and Washer was convicted as a result, well, that just happens.  Lawyers have to make those kinds of strategic decisions on behalf of clients all the time.  Not all of those strategic choices result in an acquittal, for obvious reasons.  A conviction in such a case certainly doesn’t mean the lawyer did anything wrong or behaved incompetently, it’s just one of the common outcomes of the criminal justice system.

That, however, does not appear to be what happened in this particular case, because that’s not what Washer’s lawyer actually did.  As described, Washer’s lawyer decided not to argue self-defense to the jury during the evidence portion of the trial, because he believed the self-defense narrative was a weak one. So, weak, in fact, that he never requested a jury instruction on self-defense, and thus effectively took self-defense off the table as a basis for the jury to acquit his client.

To quote the appellate court decision in this case:

[Washer’s lawyer] explained that he did not ask the trial court for a self-defense jury instruction because the “instruction for self-defense is awful.” Counsel testified that in his experience, sometimes the better strategy is to argue to a jury without the use or benefit of corresponding jury instructions.

Folks, this explanation literally makes no sense.  It’s as if a baker was explaining that he didn’t buy flour in preparation for baking his cake because sometimes the better strategy is to bake the case without flour.  Uh, actually, no, that’s NEVER the better strategy.  And it can NEVER be the better legal strategy to urge a jury to acquit your client on the basis of a jury instruction you affirmatively decided they should not be given as the basis of acquittal.

The appellate court correctly characterized this explanation by Washer’s lawyer as being the nonsense that it is, writing:

We can fathom no sensible, strategic reason for counsel to argue self-defense during Washer’s closing argument but opt not to request a self-defense jury instruction. … Counsel’s assessment that the instruction is “awful” is insufficient.

Washer had appealed his conviction on the basis the performance of his lawyer was so inept that he’d been denied the effective assistance of counsel guaranteed to him by the US Constitution.

In this case, however, the appellate court found that Washer’s lawyer had failed to meet even that shockingly low threshold, writing:

Accordingly, because counsel’s performance was deficient and resulted in prejudice, we reverse …

Note, however, that when an appellate court reverses a conviction on such a basis, they don’t simply set the defendant (or, on appeal, the appellant) free.  Rather, they simply give the defendant another bite at the apple, another chance to fight that legal battle.  As this appellate court continued:

… and remand for a new trial on all counts …

Make no mistake, a second shot at a trial is a huge win for the defendant, especially when the alternative is multiple convictions on felony gun charges.  But it’s a huge win with a lot of built-in costs—all the costs that will be incurred in fighting that second battle.

So, in wrapping up, there are really two lessons this appellate decision teaches us.

First, the consequences a defendant can suffer if they have poor defense counsel.  Those strategic or non-strategic or simply mistaken decisions by one’s lawyer can easily make or break a defense all by themselves. There’s no guarantee that just because a lawyer has passed the bar and been licensed to practice that they’re going to make competent decisions in a particular case.

That’s one of the reasons I’ve always felt strongly that it’s extremely important that a defendant have the option to choose the attorney that will represent them at trial.  You might be thinking, but don’t I always have that choice?  The answer to that is generally yes, but it can get a bit more complicated in the context of pre-paid legal services arrangements.

Some pre-paid legal services, for example, limit their services to a list of lawyers that they have chosen.  What if you don’t like any of the lawyers on that list?  Well, you’re free to choose your own lawyer, one not on that list—but in that case the service may decline to cover that lawyer’s cost.  Well, then what the heck have you been paying for all those months of membership in the service?

I expect everyone reading this knows that Law of Self Defense has partnered with CCW Safe, and indeed that my family and I have chosen CCW Safe personally for coverage of our legal expenses for a self-defense event.  One of the reasons for this is that while CCW Safe does provide members with a list of pre-vetted attorneys they recommend to members, there’s also an option to have an attorney not on that list covered, as well.

There is a condition to going off list, and that is that CCW Safe’s National Trial Counsel, Attorney Don West, speak with and approve the choice of lawyer.  Frankly, that’s not only a perfectly reasonable condition, it’s to the benefit of the member.  Folks, if Don were to suggest that your preferred attorney is a less than optimal choice, you’d be wise to take such a suggestion extremely seriously.

This case also raises another issue that I’ve touched upon repeatedly in the past, and that is the prospect of having to wage not just a single legal battle for your freedom, but multiple legal battles, and the importance of having the resources to do so.

Most people facing multiple felony charges are going to devote a huge proportion of their available resources to winning that legal battle in the hopes of not having to spend a few decades living in a cage.  That’s only prudent.  But what if you lose that first legal battle, and then are lucky enough to be given the chance to fight the battle again, as occurred in this case with Washer?  Will you have any resources left for that second battle?  Or is losing the second battle already a foregone conclusion because there’s nothing left for that second fight?

You might think that simply having some kind of pre-paid legal service for self-defense already in place addresses this concern, but in many cases you’d be mistaken.  Some providers of such services are only obligated to cover you for the first legal battle—and indeed, not even that first one if it turns out you’re convicted and if their obligation was to reimburse only if you were acquitted.

In contrast, CCW Safe commits to covering not just your first legal battle, but any subsequent battle, as well—without limit.  That’s a big deal folks, and another key reason why I’ve chosen to partner with, and be a member of, CCW Safe.

OK, folks, that’s all I have for you today, except this:  Many of you will have heard me make repeated reference to the “5 Elements of Self-Defense Law,” the framework we developed way back in 1998 to teach self-defense law in a plain English way, and which we’ve used ever since for that same purpose.

We’ve recently developed an infographic of these same 5 elements that we’re making freely available to anyone who would like one—and, frankly, all of you should want one.  If you don’t know these 5 elements, you don’t really understand self-defense law.

Best of all, it costs you nothing to grab a copy of this infographic, as we’re making it available for free as a simple PDF download.  You can grab your copy here:

The 5 Elements of Self-Defense Law Infographic

(If you’re a self-defense instructor, you can also obtain a poster-sized copy of this infographic for classroom use.)

OK, folks, that’s all I have for you today.  I’m not sure if we’ll have much content during the Thanksgiving holiday, so if I don’t touch base with all of you before than, please enjoy a safe and happy time with your families.

Law of Self Defense CONSULT Program