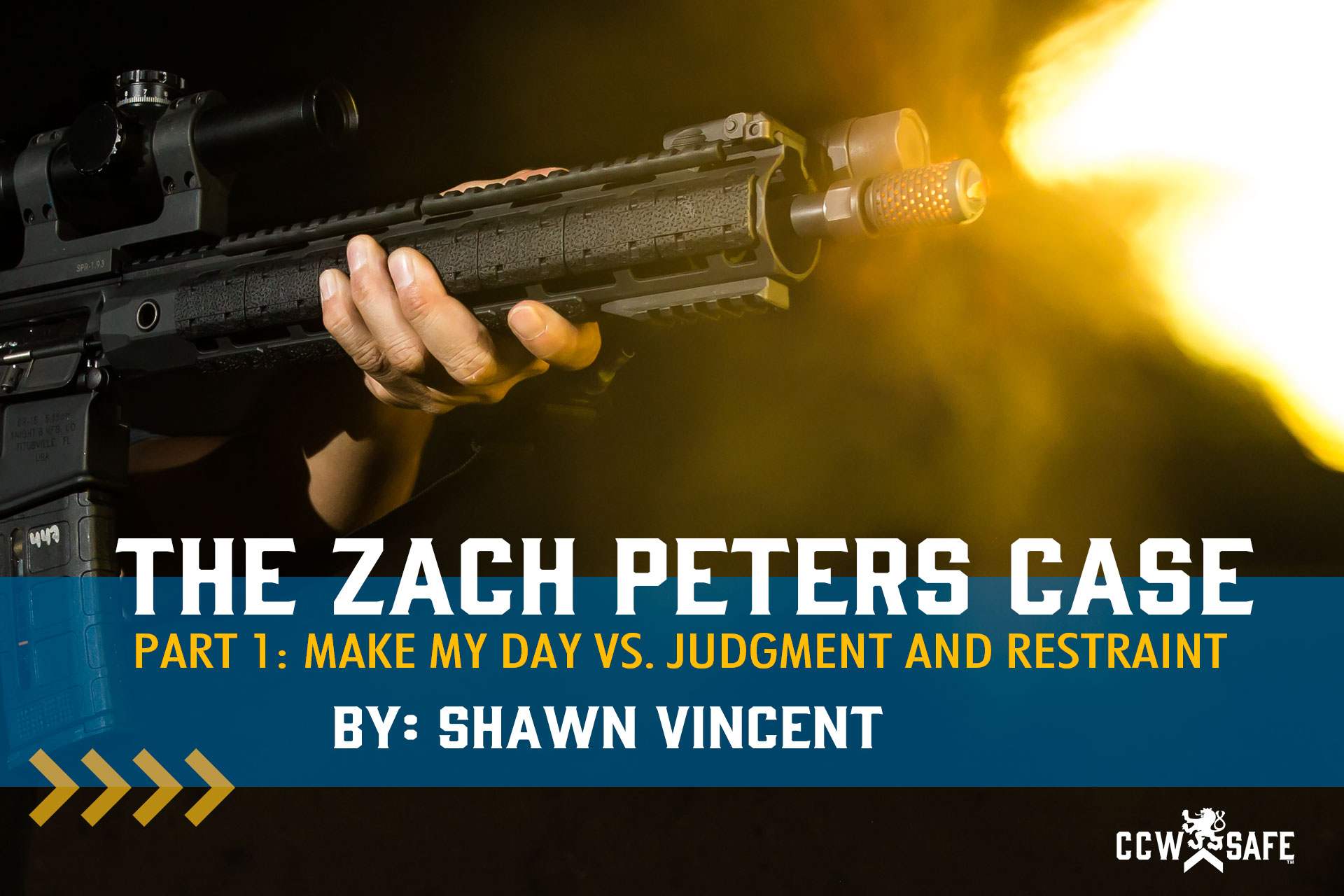 THE ZACH PETERS CASE PART 1: MAKE MY DAY VS. JUDGMENT AND RESTRAINT

The sounds of a slamming door and shattering glass startled 23-year-old Zach Peters of Broken Arrow, Oklahoma, out of a midday nap. He thought someone was breaking into his home, so he grabbed a rifle – a loaded AR-15 that his father had taught him to shoot. When he got to the doorway, he encountered three intruders dressed in black, wearing gloves and masks. Peters testified that he feared for his life and worried that the suspects were armed (in fact, they were armed, one with a knife and another with brass knuckles). There was a brief, tense exchange of words between Zach and the three housebreakers. A local press report on a subsequent hearing related to the shooting stated, “When asked if the suspects tried to hurt him, Peters says he didn’t give them the time to.” He fired at the intruders. Two fell to the floor, and the third fled. Peters then locked himself in his bedroom, called 911, and followed the operator’s instructions until police responded.

Peters would soon learn that all three would-be burglars, all in their teens, died of their wounds. In public statements to the press, the Sheriff and presiding District Attorney left the possibility open that the investigation could lead to charges against Zach, the shooter. However, self-defense laws in Oklahoma heavily favor people in their homes. Within days of the shooting, a statement from the District Attorney’s office declared that Peters “acted in accordance with his rights as an Oklahoma citizen.”

Don West, criminal defense attorney and National Trial Counsel for CCW Safe says, “Under Oklahoma law – while everyone who is in a self-defense situation needs to reasonably fear an imminent attack sufficient to cause great bodily harm or death – when you’re in your home, you’re in a special situation. If you are defending your home against an intruder, the law presumes you have a reasonable fear of imminent peril.”

For Oklahomans, this means that if someone “unlawfully and by force enters or attempts to enter” a home, they are “presumed to be doing so with the intent to commit an unlawful act involving force or violence.” While Castle Doctrine Laws in most states provide extra presumptions for people while inside their homes, the language in the Oklahoma law is so favorable to the shooter that it is often referred to as the “make my day” law.

While few dispute the legality of Peters’ decision to shoot the intruders, some – notably close relatives of the teen intruders whom Peters killed – question whether the shooting was absolutely necessary. They suggest the “make my day” law is too forgiving of shooters, arguing that the law can allow a homeowner to take advantage of the “presumed” threat to maliciously kill intruders, even when there is not a “true” fear of imminent harm or death.

Currently, 23 U.S. states have adopted a Castle Doctrine law, although presumptions regarding “intended violence” and “reasonable fear of harm” vary state-to-state. Some states, such as Oklahoma, maintain a broad interpretation of these phrases, offering greater legal protection to a homeowner confronting intruders in their residence. Like Oklahoma, North Carolina is another state where individuals have the right to use deadly force against almost any person breaking into their home.

Furthermore, the Castle Doctrine in some states includes a person’s vehicle and workplace as parts of their “castle,” allowing citizens to legally defend themselves with deadly force against intruders at their work location or occupied vehicle.

Alternatively, Illinois takes a narrower view of the Castle Doctrine, maintaining that citizens are allowed to use deadly force only if the intruder is actively engaged in committing a felony, or breaks into an individual’s home in a “violet, riotous or tumultuous manner.” Furthermore, in Illinois, a person’s workplace and vehicle are not considered extensions of their castle.

In our series, The Four Elements of Self-Defense, we explored two cases where a shooter was convicted for killing intruders after the threat had been neutralized. David Byron Smith lured two teen intruders to his basement, where he shot them in the head after disabling them. In the other case, pharmacist Jerome Ersland prevented a robbery by shooting Antwun Parker, one of two masked assailants; however, after chasing the accomplice out of the building, Ersland returned, retrieved a different gun and fired several fatal shots into Parker’s motionless body.

Clearly, Smith and Ersland’s actions were beyond the spirit of the self-defense laws that give someone the right to defend themselves in their home or place of business. While the grief of the family members in the Peters case is understandable, it’s difficult to suggest that Zach Peters abused the intended protections of Oklahoma’s law when he fired upon masked intruders and then retreated, barricaded himself in his room and called 911.

One of the intruders in the Peters case fled, but died in the driveway. Peters said he could hear one of the intruders still speaking when he made the 911 call. Gary Eastridge, a veteran homicide detective and CCW Safe’s Critical Response Coordinator, says that Peters resisted the temptation to chase the suspect out of the house or to “finish off” the intruders he had shot in the house. Eastridge said, “He reacted to the threat, and once that threat was gone, he stood by and waited for police.”

With or without a “make my day” law, Peters had a legitimate reason to fear the masked intruders who had forced their way into his home. He acted quickly and decisively to neutralize the threat, and he retreated to a more secure room in the house. All of Peters’ actions demonstrated his basic desire to defend his life against threat of death at the hands of the interlopers.

Bryon Smith and Jerome Ersland showed us how acts of extreme malice can unravel the protections that self-defense laws provide individuals in their homes and businesses. Conversely, the lesson Zach Peters provides for the concealed carrier is how judgement and restraint can keep you on the right side of the law should you ever face a self-defense scenario.