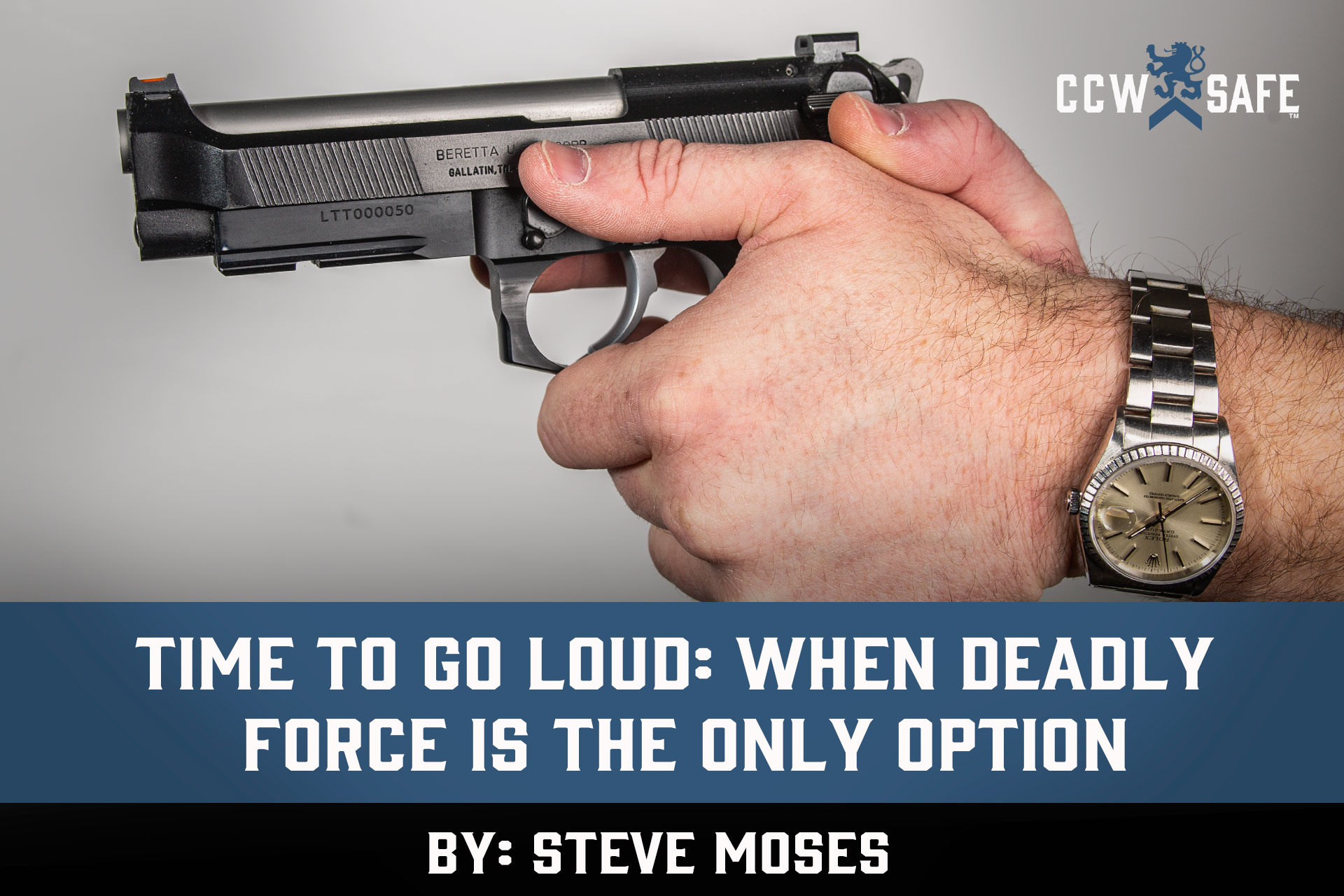 Posted on December 23, 2019 by Steven Moses in Training

TIME TO GO LOUD: WHEN DEADLY FORCE IS THE ONLY OPTION

TIME TO GO LOUD: WHEN DEADLY FORCE IS THE ONLY OPTION

Persons who frequently read articles published by CCW Safe have perhaps noted the frequency at which concealed carriers have fun afoul of the law by improperly using their lawfully carried handgun. This would include displaying the handgun in a threatening manner in circumstances that were found to be unwarranted, as well as in actual shootings that were not justified.

As a concealed carrier and licensed peace officer (reserve), I am all too aware of all the negative things that can occur if I am forced to shoot another person.  Fellow peace officer and defensive firearms instructor Bryan Eastridge summed it up by stating that if one is forced to use their handgun, three things can happen: “You will save your life, you will get sued, or you will go to prison. Maybe all three”.  Depending upon the circumstances and location of the shooting, concealed carriers may also find themselves slandered by the media, the recipients of anonymous threats, and even the object of organized protests which can also negatively impact their family members.

The problem caused by this is obvious.  Concealed carriers may find themselves in situations in which they are unable to clearly discern if all of the elements of lawful self defense are present. Does the potential threat have the ability, opportunity, and intent to inflict serious bodily injury (including sexual assault and kidnapping) or kill him or her, and is retreat an option? Can all of this be clearly discerned in time to mount an actual defense? The concealed carrier can easily find him or herself on the horns of a dilemma. Going to the gun too fast can mean serious problems, going too slow can mean risk serious injury or death.  The problem then becomes avoiding a mental and physical state sometimes called “Paralysis by Analysis”.  People where I grew up use a slightly less technical term: “Like a deer caught in the headlights”. Either term simply means the concealed carrier is simply frozen on the spot and unable to respond while they try to process what they are seeing and decide what to do, which is exactly what some violent actors desire as it affords them the opportunity to more safely accomplish their desired objective.

Concealed carriers should study the elements of self-defense and make sure they understand them. There is plethora of good articles and podcasts addressing these elements for those who go to the CCW Safe website, including some by attorneys Shawn Vincent and Don West addressing both the specifics of shootings in which concealed carriers were involved as well as the outcome of the trials that followed. Those concealed carriers willing to train should consider taking one or more classes from qualified instructors who understand all of the elements of lawful self-defense and can effectively convey that information to others and then follow that up with drills and exercises that teach students when and how to use their handgun in a responsible and safe manner.

I am unable to overemphasize the importance of learning how to manage contacts with approaching contacts whose intent is either unknown or obviously violent. One of the best things that a concealed carrier can accomplish is to act proactively in such a manner that, as Mike Darter of CCW Safe is known to say, helps strip away the ambiguity within an encounter and enables the concealed carrier (as well as 12 of his or her peers on a jury) to say without a reasonable doubt that the other person appeared to have the opportunity, ability, and intent to injure or kill, and no other option than responding with deadly force remained. If all of those boxes are checked, then it is now time to physically respond to the actions of the other (or others) with as much force as is necessary for self-protection.

I really believe that concealed carrier should train until they can consistently draw their concealed handgun in a repeatable manner that is both robust and quick. A good goal for most people would be around two seconds (based upon a timer that starts with a beep and registers the amount of time from it to the first shot fired) to draw and hit a fist-sized target at fifteen feet. Of course, faster is better, but not at the expense of missing or occasionally fumbling the draw. My students over the years ranged in age from late teens to 84.  It was quite rewarding seeing our 84-year old student reduce the time of his first shot from concealment to an accurate hit at seven yards from 3 seconds to 2 seconds. Concealed carriers with significantly slower draws need to remember that they may have less time to process what they are seeing and be forced to act faster than would otherwise be normally required in order to mount an effective defense.

For those wondering how one “strips ambiguity from an encounter”, the answer is to first learn how to look for non-verbal pre-assault cues and recognize movement suggesting that another is attempting to catch up to, cut off, or otherwise intercept the movement of the concealed carrier.  The concealed carrier should understand how close “too close” is and be prepared to respond once that invisible boundary line is crossed. The concealed carrier should have his or her responses pre-loaded, which can start with a simple request (“sir, would you please mind not coming any closer?”) that can escalate all the way to a loud verbal command of “stay back”. Normal people will typically comply. Even common street criminals looking for a quick payday will typically comply. Those who won’t comply will be the concealed carrier’s biggest problem.

A reasonable question that concealed carriers might ask is how I will know with more certainty when it is time to use deadly force to protect my life. My opinion is that they need to attend a class where the students participate in scenario-based drills in which they may be accosted that can be deescalated without violence, attacked after being accosted, or attacked without warning. Students might use a variety of training props, including plastic replica pistols, airsoft pistols, and simunitions pistols. Doing this in a classroom situation under the watchful eye of an instructor who knows what he or she is doing along with fellow classmates who are learning by simply watching these scenario-based drills play out is a great way of preparing for a real-life extreme event.

I will go for my handgun once my brain registers that I am being attacked by another, I am in grave danger, and it’s more than I can physically handle. At that point there is nothing else that I can do but go for my handgun and prepare to, as Russell Crowe said in Proof of Life (one of my favorite moves), “go loud”.  CCW Safe wants me alive and safe and will do their part afterwards if I do mine.  The more homework, training, and range time I do in advance, the greater the chances are that I will do my part correctly.