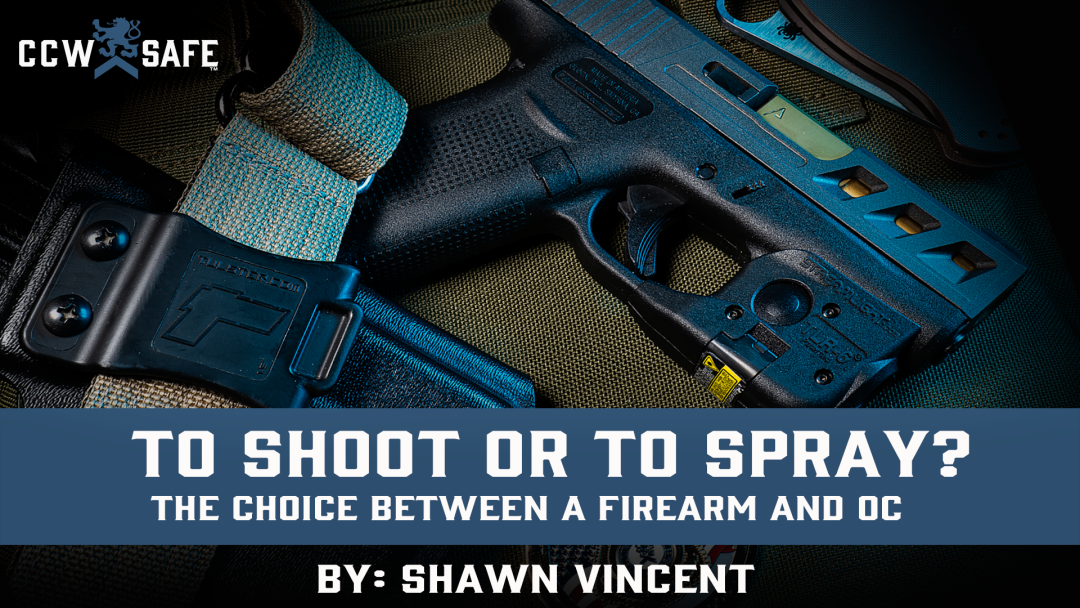 To Shoot or To Spray? The choice between a firearm and OC

To Shoot or To Spray?

The choice between a firearm and OC

When Markis McGlockton walked out of a convenience store in Clearwater, Florida, he saw Michael Drejka scolding his life partner, Britany Jacobs, for parking in a handicapped parking spot. Security camera footage shows McGlockton walk briskly towards Drejka and violently shove him to the ground. Drejka, a licensed concealed carrier, pulls his pistol. McGlockton appears to take a step or two backwards. There’s a pause. Then Drejka shoots. It’s fatal.

At first, Pinellas County Sheriff Bob Gualtieri declined to arrest Drejka, citing Florida’s “stand your ground” law; however, he expressed reservations when he told reporters, “That pause gives me pause. Just because you can, doesn’t mean you should.”

Ultimately, the State Attorney stepped in and filed manslaughter charges. A little over a year later, Drejka stood trial, and a jury found him guilty. Some of the jurors spoke to reporters following the verdict. They said they watched the 11-second video of the shooting two or three hundred times. Juror Timothy Kleinmann said, “He (Drejka) had time to think, ‘Do I really have to kill this man?’ And no, he didn’t but he chose to.” An alternate juror said, “The defendant had enough time to make the decision that once he saw the victim retreating, that he did not have to pull the trigger.” Another said simply, “I think he had the opportunity not to kill him.”

Each of these jurors echo what the Sheriff said. Drejka didn’t need to use deadly force.

But that is not to say some force wasn’t justified at all. Firearms instructor, jiu jitsu teacher, and CCW Safe contributor Steve Moses reminds us that “fists can be very dangerous,” and just because McGlockton wasn’t armed, didn’t mean he didn’t pose a physical threat. Don West, criminal defense attorney and National Trial Counsel for CCW Safe notes that McGlockton was the initial aggressor and “Drejka had every reason to be somewhat fearful.”

Don watched much of the trial as it streamed live on CourtTV, and he said the prosecutor in the case admitted that Drejka may have had the right to show the gun, he just didn’t have the right to fire the gun. Sitting there, prone on the ground, with his aggressor standing over him, unable to compete physically, Drejka was caught between using too much force, or potentially too little.

No long ago, Steve Moses wrote a great article for CCW Safe called “Filling the Gap Between Too Little and Too Much Force.” He explains that concealed carriers can find themselves in situations where force is justified, but necessarily not deadly force. To fill this gap, Steve recommends a less lethal option, and for many, pepper spray, or OC, is a good choice.

I asked Steve if OC would have been a viable option for Drejka. “From my perspective,” Steve says, “once Drejka was shoved to the ground, McGlockton seemed to just pause everything. . . it looked almost like he believed that he’d made his point and that he wasn’t going to necessarily follow up.”

From a legal perspective, Don West says that, even if law enforcement felt Drejka wasn’t necessarily justified in using the pepper spray, it is unlikely there would have been any charges filed against him. “McGlockton was the initial aggressor, “Don says. “Even if Drejka shouldn’t have directly sprayed him at that moment, I think those two wrongs cancel each other out.”

Steve Moses challenges concealed carriers to put themselves in Drejka’s shoes. “I think it’s really important to understand that, ‘Okay, at what point do I use lethal force?’ And ask, ‘Would I have used lethal force in that situation?’ I’d like to think that for the majority of us, if you had no other option than lethal force, you still wouldn’t fire that shot. Better yet, if you also had OC, then the ability to pull that and use it if you had concerns would be a big plus in that situation.”

The lesson for concealed carriers is that not all self-defense scenarios justify the use of deadly force. If you’re not trained in martial arts, and if your only defensive tool is a firearm, you’re not left with many good options for dealing with an unarmed threat. Steve Moses recommends concealed carriers also carry a less lethal option so they have a defensive tool to “fill the gap” between potentially non-lethal and deadly threats.