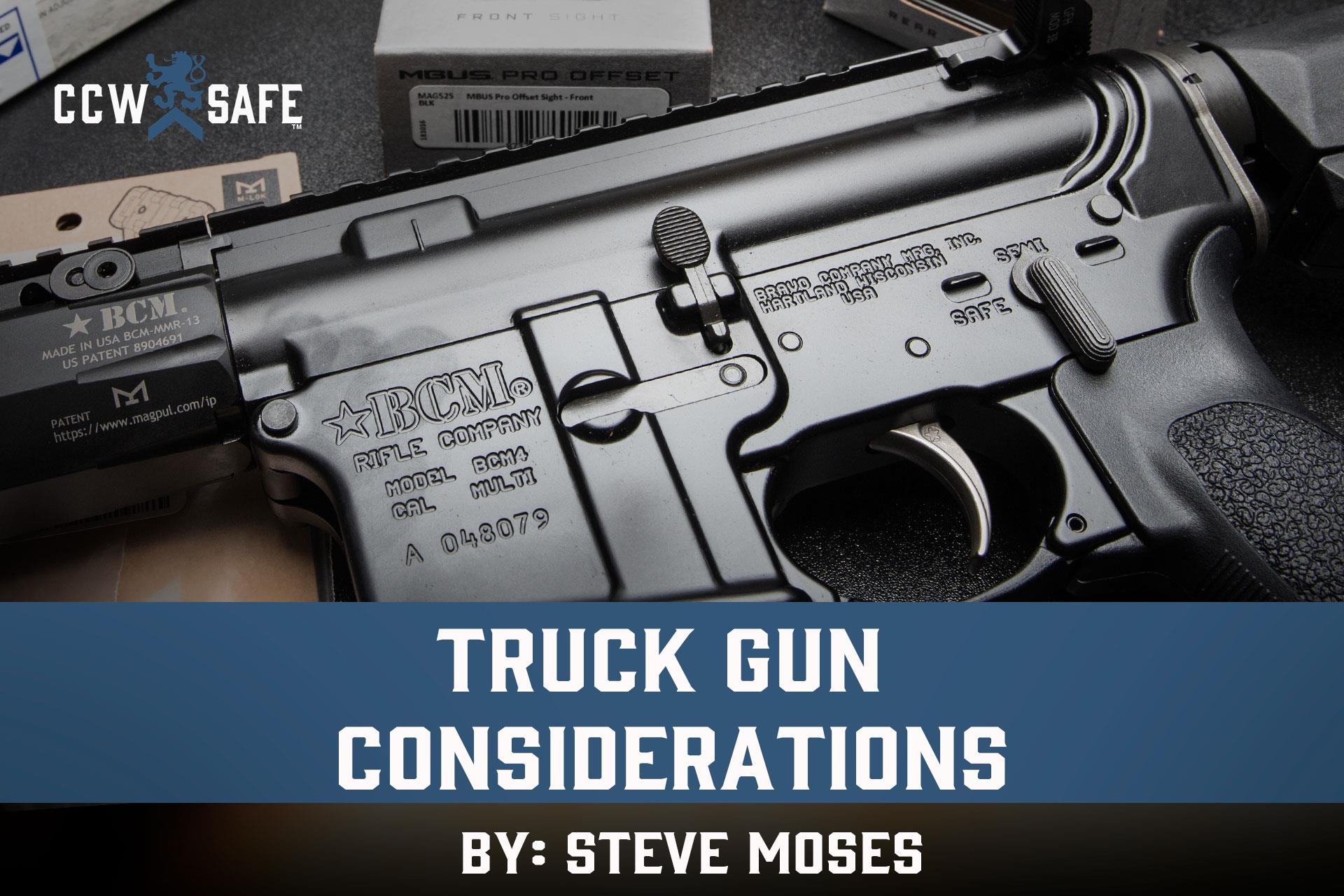 Posted on November 16, 2020 by Steven Moses in Training

I wrote a previously published article titled The Truck Gun Concept (also Known as the Good, the Bad, and the Ugly”) in which I discussed some valid reasons that concealed carriers might benefit from keeping a “truck gun” (or “trunk gun”) in their vehicles as a supplement to their concealed handgun for those situations in which a long gun would be superior to a handgun for defensive purposes. Something like a Remington 870 shotgun or Marlin lever-action 30-30 works quite well for concealed carriers who must travel through states where concealed carry of handguns is unlawful.  Popular truck guns in 2020 include the AR-15, AK-47 clones, and AR-15 pistols chambered in .223/5.56mm, .300 Blackout, and pistol calibers like the 9mm.

Keeping a truck gun inside the cabin area or the trunk exposes it to theft. A large percentage of violent crime in which firearms were used was with firearms that were stolen from vehicles. The best way to store a truck gun is most likely going to be inside a locked vault bolted to the floor of the cab or bed of a SUV, van, or pickup, or bolted to the floor inside the trunk of a car.

There are several options for securing a long gun in a vehicle depending upon the owner’s vehicle, current configuration, and even storage preference. Vehicle styles most typically encountered will be two-door coupe, four-door sedan, SUV, van, or pickup. Configuration might include owner aftermarket purchases such as a camper shell or tonneau cover. Storage preference is dictated by the owner’s preference. For instance, the owner of a pickup may want to store his or her long gun in the cab of the truck under the back seat or in the bed of the truck. It is important to note that it is unlikely that any of these methods will deny access to a motivated burglar or car thief (there is a difference) who has the time and tools to defeat the locks. I think such devices are best viewed as a significant deterrent to a “smash and grab” burglar, and under no circumstances would I leave a long gun so secured in a vehicle that is not garaged or parked in a manner that would deter car burglars and thieves. A long gun is just not as safe as it would be in a locked gun safe in a home that is secured by locked doors and an engaged monitored security system.

Set out below are several options for securing long guns in vehicles:

Locking mechanisms are typically a combination keypad, fob, or key. Consideration should be given to the pros and cons of each locking mechanism in terms of convenience and speed of access.

Before getting involved in a third-party defensive situation concealed carriers might ask themselves whether or not their intervention would actually make things better and what are the possible risks they may be assuming. The several minutes it might take to access a truck gun in a situation where every second might count means that if rapid action was needed by the concealed carrier in order to defend him or herself or others, immediately defaulting to the concealed handgun might be the better choice.

There is always going to be a chance that a concealed carrier with good intentions is mistakenly engaged by responding law enforcement or another concealed carrier. Of course, the same is true if a concealed carrier uses a handgun instead of a long gun, but the chances that it might incur because of the long gun are likely to increase because of its association with active shooters. Since it may take several minutes to access a secured truck gun, it might not hurt during that time period to reflect upon the advice of defensive firearms trainer Claude Werner, who suggested that concealed carriers might be well served to stick to the following four strategies when it comes to personal protection:

Prior to going to the defense of unknown third parties, concealed carriers might be well-served to ask themselves if their motivation is to just be a hero or if what is taking place before their eyes is so shocking to their conscience that even if they had every intent of avoiding an encounter with the legal system and or a civil lawsuit they still would never be able to live with what they failed to do for the remainder of their life. This means being aware of the dangers that lies with misreading the situation, getting seriously injured or killed, or firing a shot that hits a bystander.

One last thing: concealed carriers who own truck guns but have not had prior formal training with a defensive rifle or shotgun should really give some serious thought to doing so. A good instructor will teach his or her students how to get a long gun quickly and safely into action, keep it up and running, and use it responsibly in a high-stress situation where seconds (and lives) truly matter. There is a reason that armed professionals who must be prepared to go into harm’s way with little notice take training seriously and are dismissive of those who believe that they will just “deal with that problem when they get to it.”

Am I pro-truck gun or not? The answer is yes, but I need to remember that I am adding to my list one more thing that I need to proactively keep up with.