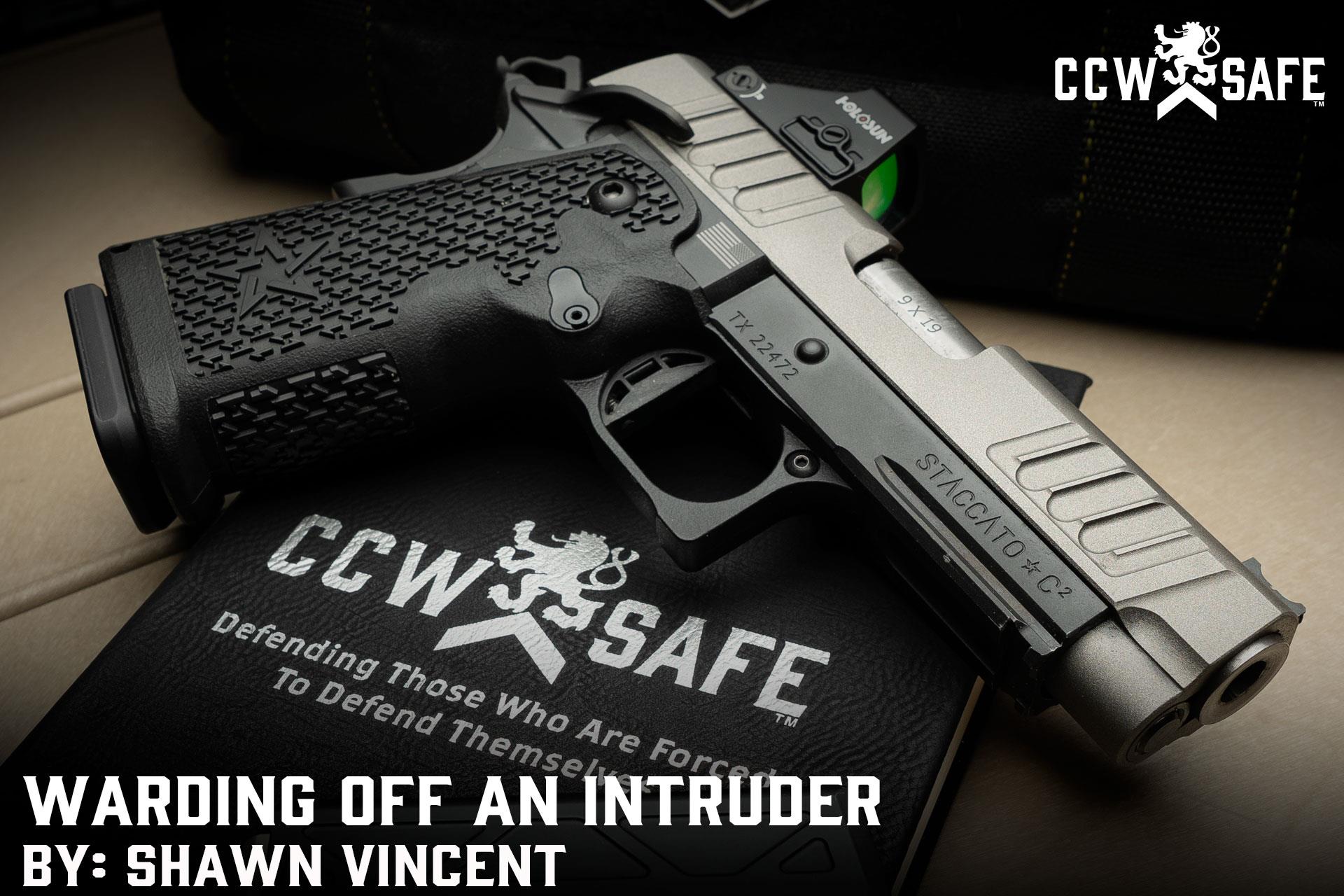 Posted on April 15, 2022 by Shawn Vincent in In Self Defense

Warding Off An Intruder

“Criminals, for the most part, are not in the business of fighting,” says firearms and self-defense instructor Claude Werner. “They’re in the business of taking advantage of a person’s weakness.” Often, a home intrusion is thwarted, Claude says, “as soon as you put that shoe on the other foot and say, ‘Look, this is no longer a victimization – this is a fight.’”

Years ago, Claude conducted a statistical analysis of five years’ worth of self-defense cases that were reported in the NRA’s “Armed Citizen” column. 52% of those cases were home-defense cases, and in nearly one-third of those, the defender warded off the intruder without firing a single shot. Aggressive communication or a defensive display can often be enough to send the bad guys running. Claude found that intruders will usually flee once they realize they have been detected, and others will abandon the break-in when they confront an armed defender.

Claude finds that many people are uncomfortable speaking forcefully with a gun in their hands. In a recent podcast, Claude told us it once took five attempts for him to get one particular client to convincingly shout “Go away, I have a gun!”, and he has encountered other armed defenders who admitted they had trouble issuing verbal commands during a terrifying personal encounter with an intruder. “When some people put a gun in their hand, especially when they’re not used to it,” Claude says,  “the gun then becomes preoccupying, and it’s hard for people to think, it’s hard for them to speak, and it’s hard for them to make good decisions.” As an armed defender, the more time you spend handling your firearm and practicing to shout firm commands with the gun in your hands, the more prepared you’ll be to rise above your fear should you ever face a home intrusion.

Firearms instructor Tatiana Whitlock warns that if a defender is not able to make verbal commands assertively and confidently, it could demonstrate weakness to a potential attacker. Like Claude, Tatiana stresses that the practice of shouting stern verbal commands should be part of an armed defender’s training. Claude goes so far as to recommend that armed defenders consider investing in a megaphone. “Who has megaphones? The police,” Claude says. “The ability to amplify yourself can be very, very useful.”

Another benefit to strong voice commands is that it helps eliminate any ambiguity about a perceived intruder’s intentions. We’ve encountered all-to-many stories about armed home defenders who mistook friends or family members for intruders. Claude jokes that “If you say ‘Who’s there?’ and the response is ‘Daddy, it’s me!’, the FBI calls that a clue.” However, if a suspected intruder doesn’t respond to verbal warnings and continues with their suspicious behavior, that is a clue as well, and you can face the threat with more confidence that force is justified.

If a third of the home intruder cases in Claude’s statistical survey involved incidents where no shots were fired, it means defenders in the other two-thirds were forced to pull the trigger. Perhaps surprisingly, however, Claude reports, “The average and median number of shots fired was 2.” When more than two shots were fired, “it generally appeared that the defender’s initial response was to fire until empty.” This means that one or two shots are frequently all it takes to successfully stop a home intruder.

“The most common responses of criminals upon being shot were to flee immediately or expire,” Claude wrote in his analysis. According to Claude’s stats, at least one assailant was killed in 53% of the incidents where shots were fired by a defender, and he writes, “With few exceptions, criminals ceased their advances immediately upon being shot.” Moreover, “Many criminal actors vocally expressed their fear of being shot when defenders displayed a weapon.” If you’re in a home defense circumstance where you’ve been able to cause the intruder to flee, Claude recommends you let them go. “If you shoot the criminal and he runs away and the attack is ended, that’s good enough,” Claude says, “I’ve fulfilled my mission to force him to break contact, and I survived the day without harm.”

In his report, Claude writes, “Upon the criminals’ flight, the ‘victims’ frequently chased and captured or shot the criminals and held them for the authorities.” Claude warns that this is a dangerous idea. While it may have worked out for the defenders in Claude’s study (which is 20 years old now), chasing down a criminal after breaking contact exposes the defender to the physical risk of a new attack, and it carries tremendous legal risk. Don West, criminal defense attorney and National Trial Counsel for CCW Safe, says, “If you take the aggressive position at that point and chase them or shoot at them as they’re running away, you may very well lose any benefit of the so-called Castle Doctrine, the protection of your home, and you’ll also probably be acting outside of so-called standard self-defense, too.” If you chase a criminal after the initial threat has ended, you could, ironically, be considered the “initial aggressor.” Firearms instructor Steve Moses says defenders who have warded off intruders should stay vigilant, confirm the intruder has left the property, and be a good witness so they can describe to police what the criminal looked like and point authorities in the direction that the intruder fled.

In some cases, the intruder is not deterred by the sight of an armed home defender, and in these circumstances, Claude says it’s important to be immediately willing to fight. Hesitation at the critical moment could lead to what Claude refers to as a “negative outcome.” This is one of the reasons it is almost always a bad idea to fire a warning shot at an intruder. If a criminal is going to be deterred by your firearm, you’ll know as soon as they spot your gun. If they’re not, and you’re truly in peril of imminent serious bodily injury or death, you shouldn’t waste time with a warning shot because you might miss the opportunity to effectively defend yourself and your family, and it could have the effect of emboldening the criminal by demonstrating your reluctance to use deadly force.

The lesson for armed home defenders is that most intruders will flee if they are detected or they realize they’ll have to fight. Don’t be afraid to use stern voice commands to communicate that you are armed and prepared to defend yourself. Perhaps most importantly, you must appear willing and able to effectively use your firearm. That means training enough to be comfortable with your gun and having the resolve to use it if you must. Sometimes your resolve will be enough to convince an intruder to flee, and if that happens, be a good witness and let them go; but if it’s not enough, and if the intruder presses the attack, be prepared to follow through knowing you’ve made reasonable attempts properly assess the threat. Claude writes, “If the attacker does not withdraw, counterattack without hesitation.” Communicate aggressively, have confidence in your abilities, and commit fully if you must use force.