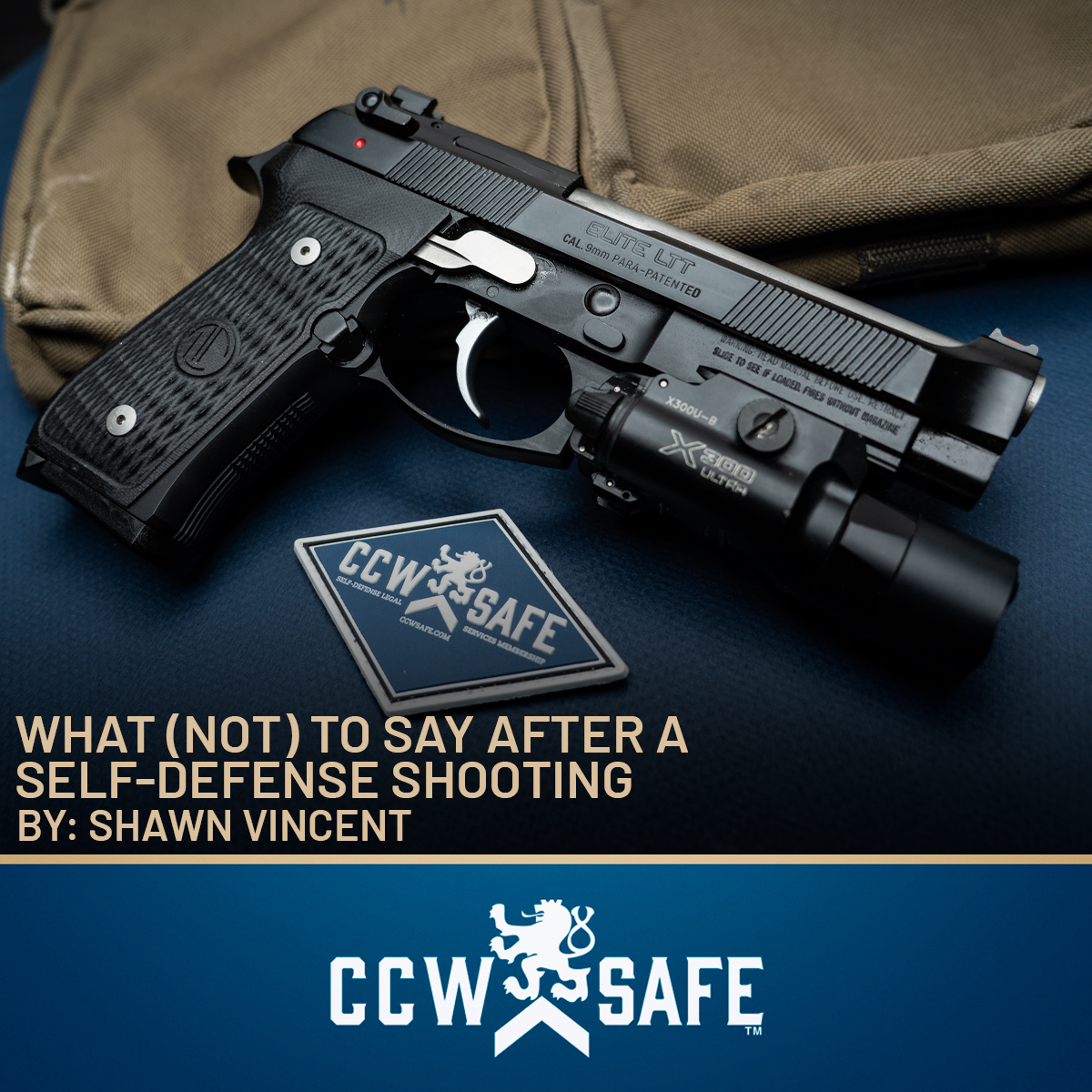 Posted on October 7, 2022 by Justin Collett in Shawn Vincent

What (Not) to Say After a Self-Defense Shooting

Thanks to cop shows on television, we all know that “you have the right to remain silent. Anything you say can and will be used against you in a court of law.” That’s part of your Miranda Rights, and as an armed defender in the aftermath of a self-defense shooting, it is absolutely true — whether an officer reads your rights or not. But just because you have the right to remain silent, it doesn’t mean you shouldn’t say anything. It is almost always advisable for an armed defender not to make a detailed statement to police without the advice of counsel in the wake of a shooting, but it’s important to identify yourself as the one who was attacked and to assert your self-defense claim. Saying anything more increases the risk of jeopardizing your legal defense. In some circumstances, however, it could be worth taking that risk.

Knowing what to say to law enforcement officers in the wake of a self-defense shooting — and knowing what not to say — might be the most difficult and dangerous decision an armed defender will have to make (aside from the decision to use deadly force in the first place). Don West, criminal defense attorney and National Trial Counsel for CCW Safe, says, “There is no clear answer that best serves everyone in every situation,” and he equates the perils of speaking to law enforcement after a self-defense shooting to “holding a square dance in a minefield.” While there are no hard and fast rules for armed defenders on what to say to the police, we can offer some practical guidance to inform your judgment.

In the wake of a self-defense shooting, most armed defenders are both physically and mentally compromised. Don says, “It is impossible to predict how the trauma of the situation will affect you and how clearly you are thinking.” This is common knowledge in the law enforcement community, and it is standard practice for officers involved in a shooting to wait 48 to 72 hours — two full sleep cycles — before giving detailed testimony. After a traumatic, life-threatening event, our brains just aren’t operating normally, and we risk saying something that is unintentionally wrong.

Stephen Maddox unintentionally made factual errors during his testimony following a self-defense shooting. Stephen is a CCW Safe member who was acquitted of murder, and he has asked us to share his story so other concealed carriers can learn from his mistakes. His biggest mistake, arguably, was submitting to a police interrogation without counsel the night of the shooting, unaware of how psychologically impaired he was. He gave incorrect answers to the most basic questions such as his current address and the number of children he had. Stephen wasn’t trying to misrepresent himself; he was just in trauma.

While an armed defender is ill-advised to make detailed statements to law enforcement officers without the advice of a lawyer, it is also ill-advised to say nothing at all. An armed defender can legally declare, “I have the right to a lawyer, and I’m not going to talk to you until I get one,” but by shutting down completely, the defender misses an opportunity to emphasize the self-defense claim and to point to specific evidence that may support that claim. If there were potential witnesses to the shooting, it may be a good idea to tell investigators. If there is a camera that may have recorded all or part of the confrontation, that could be valuable to your case. If there were multiple attackers and one or more fled, that is an important detail for police to know. It wouldn’t hurt to ask for a blood alcohol test if you know you aren’t under the influence, and if you sustained any physical injuries during the attack, ask to have them photographed and documented before paramedics treat you.

Don West stresses that an armed defender can point to potential evidence without commenting on the significance of that evidence, and without providing specific details about the shooting. A defender can tell police about the existence of a security camera without suggesting what the footage might show. This is important, because if any of the defender’s testimony conflicts with the physical evidence — even if the discrepancy is a result of a misperception, or a confabulated memory, or a simple misstatement —  that testimony could be interpreted as a lie, unnecessarily raising investigator’s suspicions. Stephen Maddox’s misstatements very likely set prosecutors against him and contributed to their decision to file charges. Don says the most challenging part of many self-defense cases is not dealing with evidence; it is overcoming the defender’s own statements.

If any of this sounds confusing, that’s because it is. The lesson for armed defenders is that dealing with law enforcement in the immediate aftermath of a self-defense shooting is a legally precarious endeavor. There are some things that you can say or do that could reinforce your self-defense claim, but there are many more things you can say or do that may put your legal defense in jeopardy. Many defenders, confident they are justified and eager to prove it, volunteer too much information, and Don West warns that “No one can withstand questioning for several hours without saying something that is inconsistent or ill-advised in the wake of a traumatic event.” Other defenders say too little and come off as uncooperative and aloof, potentially raising investigator’s suspicions regarding the shooter’s motives. There is no script. Steve Moses warns against saying something wrote, such as definitively stating “I was attacked and forced to defend myself.” You want to convey that sentiment, but you want to say it in a way that fits the context of the moment and is authentic to you. Identify yourself, make your self-defense claim, and point out evidence that may help your case. Be authentic. Cooperate with investigators, but when it doubt, shut your mouth.