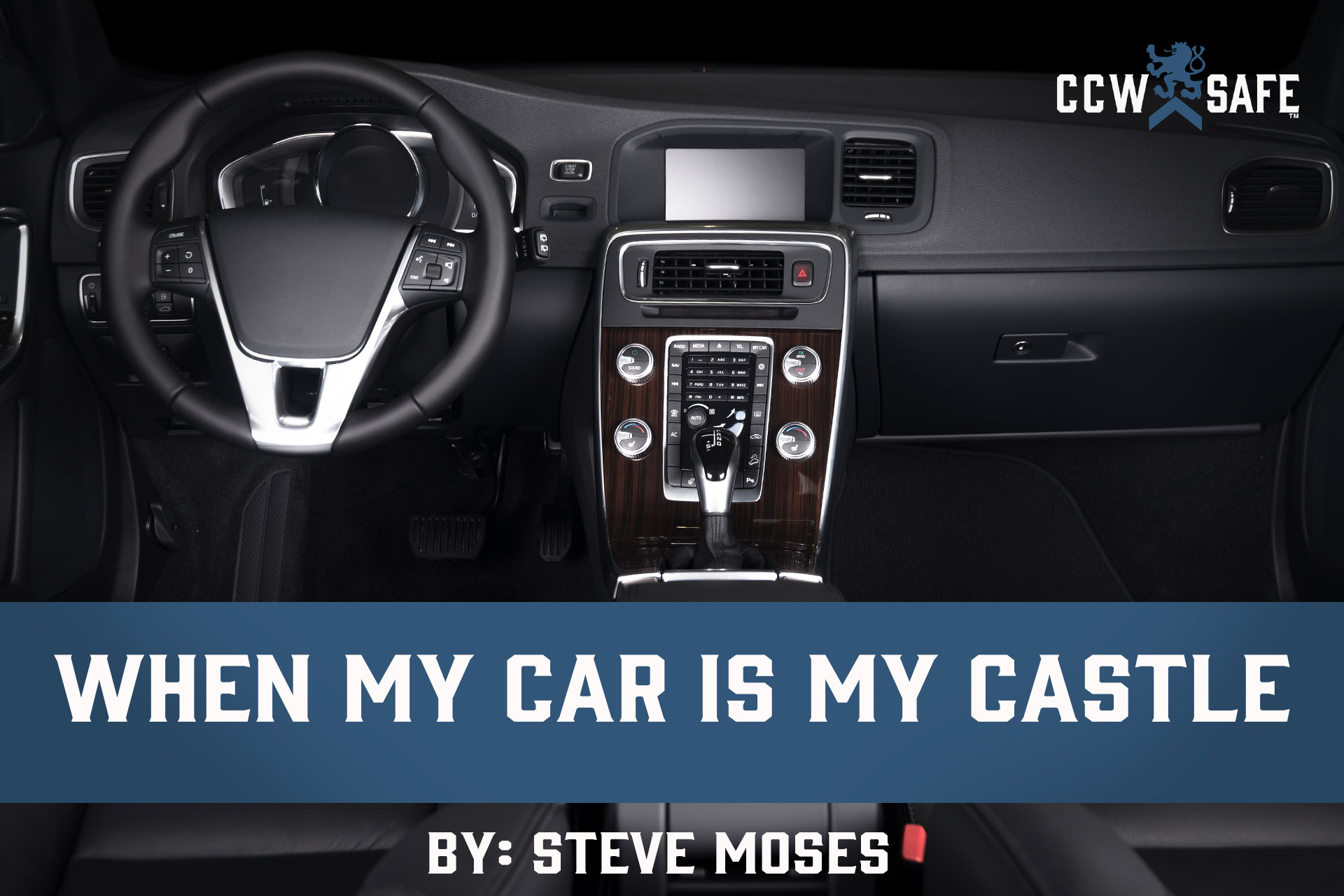 Posted on December 30, 2019 by Steven Moses in Training

WHEN MY CAR IS MY CASTLE

WHEN MY CAR IS MY CASTLE

Concealed carriers familiar with past CCW Safe podcasts and articles have most likely noticed by now that a significant number of encounters between concealed carriers and others has occurred in and around vehicles. This makes perfect sense as many of us live or work around areas where it is necessary to travel by automobile frequently to and from work, school, shopping, and in order to complete a myriad of errands. Naturally, the chances of running afoul of others in or around my home is relatively small, but simply driving from one end of the Dallas/Fort Worth Metroplex to the other means that there is a possibility that I am frequently in close proximity to multiple motorists that have a propensity for violence.

Given the aggressive manner in which some motorists drive, the ease in which a driver can be distracted by a handheld cell phone, and simple fact that even the most  conscientious driver can make a driving error it should come as no surprise that a concealed carrier may suddenly find him or herself caught up in a confrontation with another when that was the last thing they wanted.

It is my personal opinion that my car is much like my house. I am not going to leave my house voluntarily in order to interact with another person who might be or definitely is dangerous unless it is unsafe to remain in my house. For instance, what should I do if a person or persons outside my home sets it on fire? At that point, I have two choices: stay inside and most likely perish or step outside and deal with the problem the best that I can.  The same may be true for my vehicle when it comes to close-range incoming gunfire if I am unable to safely drive away from the scene.

The encounters between a concealed carrier and another we most often read about are those that take place when the concealed carrier’s vehicle is stopped. I am of the opinion that this is absolutely something that needs to be avoided if at all possible. This may not be possible if the concealed carrier’s vehicle has been immobilized (wrecked or stuck), traffic congestion makes further movement impossible, or that he or she has parked the car only to find that an enraged or potentially violent person has approached them sight unseen and is standing only a few feet away. In the case of the latter, why not back out and drive away? It might not be the best idea if the same person is close to the vehicle and pointing a firearm.

I always default to the three elements of justifiable self-defense regardless of the location of the encounter: Ability, Opportunity, and Intent. I further follow the principle that I will first do everything reasonable to retreat, regardless of any “no duty to retreat” laws that might be in place in any particular state.  If the situation is such that safe retreat is not possible and a reasonable person would believe that the other has the ability, opportunity, and intent to shoot at me, then my best response most likely would be to get immediately into a position where I can shoot back.

Shooting back can take place from within the vehicle (through the windshield or the driver side or front passenger side window), from the driver’s seat with the door partially open, and outside of the vehicle by taking cover behind the engine block or axles.  My personal choice would be to shoot from inside the vehicle if the threat is relatively close and the odds appear good that I might get shot while opening the door to shoot or while trying to exit from the car.  The problem with always staying in the vehicle, especially if there are multiple attackers, is that I am for all practical purposes pinned in place and largely able to only engage attackers that are more or less within a 180-degree plane (between 9:00 and 12:00 and 12:00 and 3:00 positions). This means that I am extremely vulnerable to any attacker that can get even slightly behind me.

As usual, the devil is in the details. Muzzle discipline is extremely important as it is all too easy to muzzle one’s own body parts in the tight confines of a vehicle during presentation from the holster, which has to occur only inches from the steering wheel. Side window glass typically shatters when shot, but the same is not true for windshield. Windshields are hard on bullets and can cause deformation that plays havoc on accuracy and terminal effectiveness. A typical windshield is angled/curved both from top to bottom and side to side. My personal experience shooting through windshields was that my rounds struck significantly high at a distance of 21 feet from the front of the car and slightly off to one side.

I am of the opinion that at any kind of extended distance there is a good chance that a well-sighted round fired through the windshield might completely miss my target. Misses not only waste valuable time but have the added disadvantage of possibly striking others. There is a lot of internet chatter about how bonded bullets are less affected by first going through a car windshield than non-bonded bullets, but I observed a number of students using bonded ammunition shooting through a car windshield in a Craig Douglas Vehicle Combat and Shooting Tactics class that I attended, and any differences between the two in terms of point of impact and bullet deformation was not significant in that class.

Douglas spent a lot of time in that class teaching us how to quickly get into a position that allowed to quickly and safely draw and shoot or exit the vehicle  without getting entangled in the seat belt, how  to safely draw and re-holster the handgun, a means of pinning the  front seat passenger in the seat so as not muzzle them while engaging a close-range threat from the passenger side, and how to position ourselves outside of the car so that we had those parts of the vehicle that would stop incoming rounds between ourselves and the assailants and how to use distance from cover so as to lessen the chances of being hit by bullets skipping off the sides of the car.

Now for the disclaimers. The totality of the circumstances should dictate the likely best response, which still has no guarantee of success. The high points touched on this article are no substitute for proper training. There are many small details that need to be addressed during the execution of any of the actions that I discussed above in order to be as safe as possible and achieve desirable results. Concealed carriers who are dedicated to constantly making themselves, as attorney Andrew Branca might say, “hard to kill, hard to convict” are strongly encouraged to give some thought as to what they might do to minimize the chances they end up in such an encounter, as well as what might happen if they do.