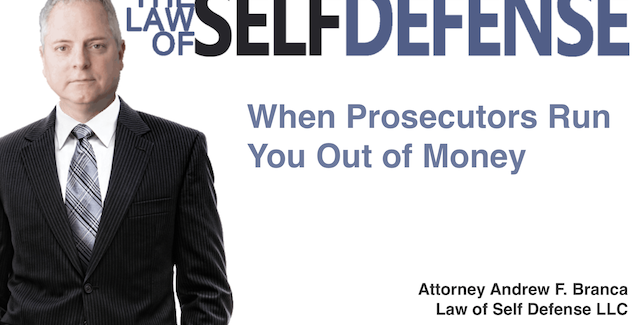 Posted on November 2, 2019 by Andrew Branca in Uncategorized

When Prosecutors Run You Out of Money

When Prosecutors Run You Out of Money

Today’s post is prompted by news reports of a second-degree murder trial that just ended in a mistrial in Minnesota. What’s interesting about this case for the purposes of this post is that this defendant is now looking at the prospect of being tried for the third time for the same claimed offense.

This raises a question all of you should consider—how many resources do you expect to have left to fight a legal battle if you find yourself facing a third murder trial?

Want to learn more about this risk, and how to offset it, while you continue your journey to be hard to convict? Stand by!

In January 2018, Alexander Weiss got into a confrontation with Muhammed Rahim over over a minor traffic accident, as reported in the Minnesota media.  The confrontation ended with Weiss shooting and killing Rahim. Weiss conceded that he killed Rahim, so that issue was never in dispute, but claimed that he did so in lawful self-defense.

Weiss was charged with second-degree murder and brought to trial earlier this past Spring.  That trial ended in a hung jury, and the prosecution promptly decided to try Weiss a second time for the same alleged crime.

That second trial ended last week, again in a mistrial.  At last reporting, the prosecution was still deliberating on whether to proceed with a third trial on the same charges.  In the meantime, Weiss remains bound by a $75,000 conditional bond and subject to re-trial at the prosecutor’s sole discretion.

Bottom line, right now for Weiss it’s as if the first two trials had never happened, and the whole trial process gets set back to zero (with the notable exception that testimony at the trial can be used in future proceedings, it doesn’t just disappear). In the context of a hung jury, there is obviously no double jeopardy protections for the defendant that would prohibit being tried again.

Indeed, for all practical purposes, there’s no limit to how often the prosecution can re-try a defendant who never receives a definitive verdict of guilty or not guilty. The prosecutor is simply free to take another swing at that defendant on that same charge all over again, as often as they like, until a final adjudication has been reached.

Now, let’s take a step back and take a broader view of what’s happening here, and perhaps consider it in the context that you’d find yourself in if you were the defendant in such a situation.

By the way, you being in Alexander Weiss’ shoes is not all that outrageous a possibility. While it’s commonly the case that the cases we read about involve the lowest of the low, genuine murderers and rapists and drug dealers and pedophiles and worse, the fact that Weiss possessed a valid concealed carry permit when he shot Rahim suggests that he was a law-abiding citizen (concealed carry permits are generally not granted to people with a criminal record).

Let me ask you this:

If you were on trial for second-degree murder and facing a multi-decade sentence if convicted, what percentage of your available resources would you commit to your legal defense in that trial? Probably pretty close to 100%. After all, the more resources you can bring to the legal fight, the better your chances for a win, and when you’re staring down an onrushing multi-decade sentence winning is pretty much everything.

So, you spend pretty close to 100% of your resources on your trial.  The good news:  you manage to not be convicted. The bad news: you also aren’t found not guilty.  You end up with a hung jury.

And … the prosecutor decides to try you again.

Having spent pretty close to 100% of your resources on your first trial, what do you imagine is left in terms of resources for a second trial?

By the way, do you think the prosecution is aware of how much—or how little—in the way of resources you’re able to bring to the legal fight? Do you think the prosecutor knows that a poorly resourced defendant is likely to be easier to convict than a well-resourced defendant? Do you think a prosecutor is more likely to bring to trial a defendant who appears more vulnerable to successful prosecution, conviction, and a long prison sentence? Especially in a murder case, which from a professional perspective for prosecutors are the most prestigious and career-making cases?

In the case of Weiss, he goes through that second trial on charges of second-degree murder … and again ends up with a hung jury.

And therefore he is again is subject to being tried, now for a third time, for second-degree murder, at the prosecution’s sole discretion.

Note that Weiss has now probably exhausted all available resources for his legal defense in both a first murder trial and a second murder trial. How much do you imagine is left for a third murder trial?

Pro-Tip: Probably darn near nothing at all.

And remember the consequences for Weiss of a conviction—decades living in a cage.

In contrast, the consequences if he had the resources to win and did so? Zero legal liability whatever because the justification of self-defense is an absolute defense.

That’s quite a disparity in outcome. I know which of those I’d want for my client or for that matter myself.

Mitigating the Risk of Resource Exhaustion

So, that’s the real-world risk of resource exhaustion in the context of fighting and winning (or losing) the legal battle after you’ve survived the physical battle.

The next obvious question is, what can we do about it?

After all, we carry a gun so that we have a better chance of winning that physical fight, so that as we say at Law of Self Defense, that we’re hard to kill. In the legal context, the resources we can bring to the legal fight are the “gun” in the legal fight. What can we do to avoid being “disarmed” by repetitive trials?

Well, you could simply be wildly self-resourced. If you’re a billionaire, you’re all set, at least in terms of resources for the legal fight.

Alternatively, you could make arrangements for some third-party to be the provider of the legal resources you’ll need to win the legal fight, and maybe win it several times in succession.

I’m talking about what I’ll refer to as “Legal Service Coverage” providers.

(For those of you not familiar with these Legal Service Coverage providers, or unsure if your understanding is correct, you might consider taking our course dedicated to this subject: “Self-Defense Insurance Explained,” available as both an online and a DVD course, and with available certification. Just CLICK HERE to learn all about that course.)

I’ve worked with most of the major Legal Service Coverage providers, and my experience with them as an attorney has been largely positive (and the legal outcomes we’ve achieved have been extremely positive). That said, not all of these programs are created equal, particularly in the context of the topic of today’s post: resource exhaustion for the legal fight.

As I expect you already know, Law of Self Defense has partnered with the “Legal Service Coverage” provider CCW Safe, over alternative providers, and I’ve personally chosen CCW Safe for myself and my family, and there are specific reasons for this.

Among those reasons is that CCW Safe does the best job of protecting its members from the kind of resource exhaustion resulting from appeals and/or multiple trials that I’m discussing in today’s post.

For purposes of contrast, let’s take a look at a hypothetical competitor of CCW Safe that I’ll refer to as “ABCDE.”  ABCDE offers an Unobtainium Membership level that will cover up to $250,000 of a member’s legal expenses in a criminal prosecution arising from a self-defense event.

Under any circumstances, ABCDE’s obligation to the member is capped at $250,000.  So, if the member’s first trial consumes $200,000 in legal expenses, there’s only $50,000 remaining for the member to access for a second trial.

But wait, it gets even worse.

If a defendant is charged with a killing crime, such as manslaughter or murder, it’s very likely that their legal defense will cost hundreds of thousands of dollars.  Not $100,000. Not $200,000. Think mid-six figures or higher.

You can see that this fiscal reality means we have a problem even at the first trial if our legal service coverage benefits are capped at $250,000.  The truth is that $250,000 probably simply isn’t enough even for a first trial.  That $250,000 will likely be totally consumed, perhaps even before the trial itself begins, and then also some hundreds of thousands of dollars more.

If $250,000 is almost certain to be consumed in the first trial, and that first trial ends in a hung jury and the prosecutor decides to take another swing in a second trial—care to guess how much of the capped legal service coverage is available for that second trial?

So, although that capped-benefit Unobtanium Membership does cover re-trials in a technical sense, as a practical matter it is almost certain to have been exhausted by the time a re-trial occurs, and therefore is simply not suited for the purposes of a re-trial (at least not in a trial on a killing charge, and perhaps not on trials for some lesser charges, either).

With that hypothetical example as a baseline, let me illustrate one of the reasons why I have partnered with CCW Safe, the reason relevant to this particular post, and why I’ve chosen CCW Safe personally as the legal services backer for myself and my family.

Further, CCW Safe also commits to cover your legal expenses for any re-trials. Again, without limit.

This is all legal territory in which your own resources, or even the explicitly limited supplemental resources provided by company ABCDE, would have almost certainly long since been exhausted.

I suggest there’s something in all that to think about when you’re thinking about choosing a “legal service coverage” program for yourself.

Before I leave this subject, I do want to make clear—I’m discussing here only a single feature of these kinds of “self-defense insurance” programs—the absolute level of resource commitment that they make to members in the context of the criminal legal fight.

That single feature may or may not be the most important feature for you, given your personal circumstances. Other providers may have other features that are more important to you than this one, and thus other plans may be the best plan for you—or perhaps you need no plan at all. Those are decisions only you can make for yourself.

In any case, I hope that’s all food for thought.

Know the law so you’re hard to convict!